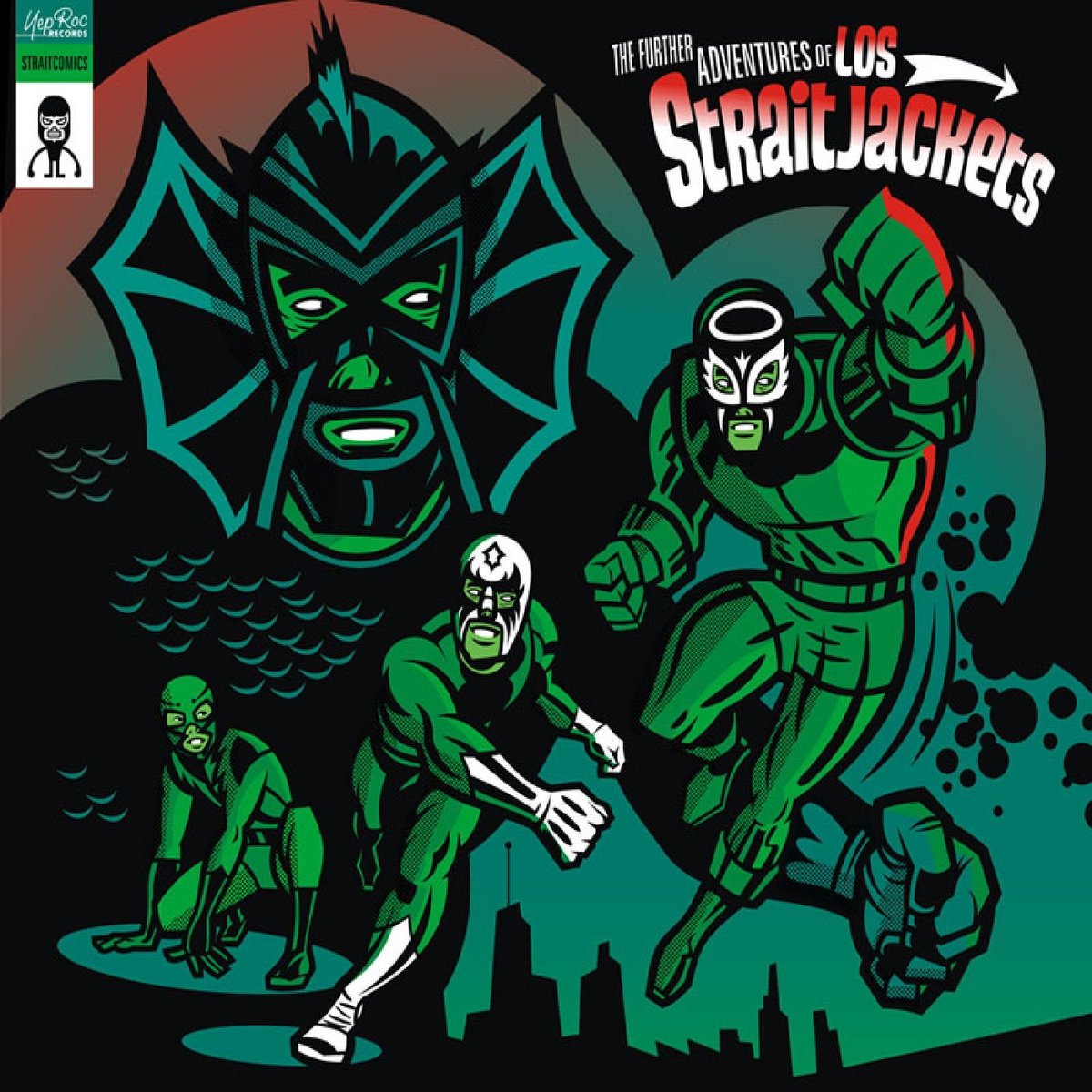 Right on time for your summer barbecue, Los Straitjackets return with their 12th album of brisk, polished surf rock. Over the decade-plus they’ve been together, the foursome have collaborated with members of Los Lobos, Reverend Horton Heat, and Nick Lowe, perpetually clad in matching black outfits, Chucks, and personalized Lucha Libre masks. Los Straitjackets always bring a canny wit to their professional, reverent surf revivalism, and after several albums of genre exercises and Spanish-only covers, The Further Adventures of Los Straitjackets finds them returning to the traditional West Coast core of their sound.

Even for a back-to-basics album, Further Adventures is pretty basic. Unlike the punky pomo calisthenics of Man or Astro-man?, Los Straitjackets traffic almost exclusively in the time-honored structure of the 12-bar blues. And in the spirit of their forerunners the Ventures, they don’t employ a lot of superfluous instruments. For the most part, that’s okay since their technical facility speaks for itself: You’ll never hear tremolo picking quite so steady or bass runs quite so complimentary. The band’s love of vintage tones comes through in each song’s carefully selected effects. At its best, the synthesis of formula, sound, and some hooky guitar flourishes come together for an old-fashioned hootenanny that’ll put the loogey in your spittoon.

But this batch of tunes doesn’t quite reach the giddy peaks of The Velvet Touch of Los Straitjackets. It’s clear these guys can churn out surf-by-numbers in their sleep, but the general trend here suggests Ambien-induced songwriting. “Challenger 64” features some lovely, sophisticated chords, but never switches up its dynamics, missing the chance to maximize its melody’s suggestion of cosmic wonder. The minor-key Motown strut of “Minority Report” drops its disguise during a redundantly bluesy bridge; in fact, there’s a lot of redundant pentatonic soloing sprinkled throughout. Sans vocals, a few of the songs simply lack memorable hooks. Fortunately, the boys have a bulging bag of tricks from which to draw: The aptly titled “Kaptain Krunch” ends with a power-chord slug fest reminiscent of the White Stripes, while “Teen Beast” marries cavernously reverbed chords to the famous “Lust for Life” beat, adding syncopated bongos to make it the choicest cut. The solo, composed of intentional bum notes and numb-fingered scratching, actually adds a weird new dimension instead of sounding like a compulsory section.

A couple of years ago, Los Straitjackets toured with go-go girl troupe the World Famous Pontani Sisters, a spectacle that put the band’s campy showmanship on full display. (It’s hard to grouse about their strict adherence to surf formulas when there’s a man in a gorilla suit chasing three pin-up girls in sailor costumes.) A song like this album’s “Tubby” would have been right on the money in that context. Pretty much just elephantine bass, lurid saxophone, and a clomping beat, it’s as playful and scantily clad as one of those go-go girls. It’s a perfect example of the ear-to-ear grins this kind of stuff can induce when it works, when the formula is tweaked in just the right places. Further Adventures is probably not asking for a lot of critical scrutiny; in the 1950s, surf music soundtracked a lifestyle unspoiled by introspection anyway. Now who’s got the beer cooler and burger flipper?