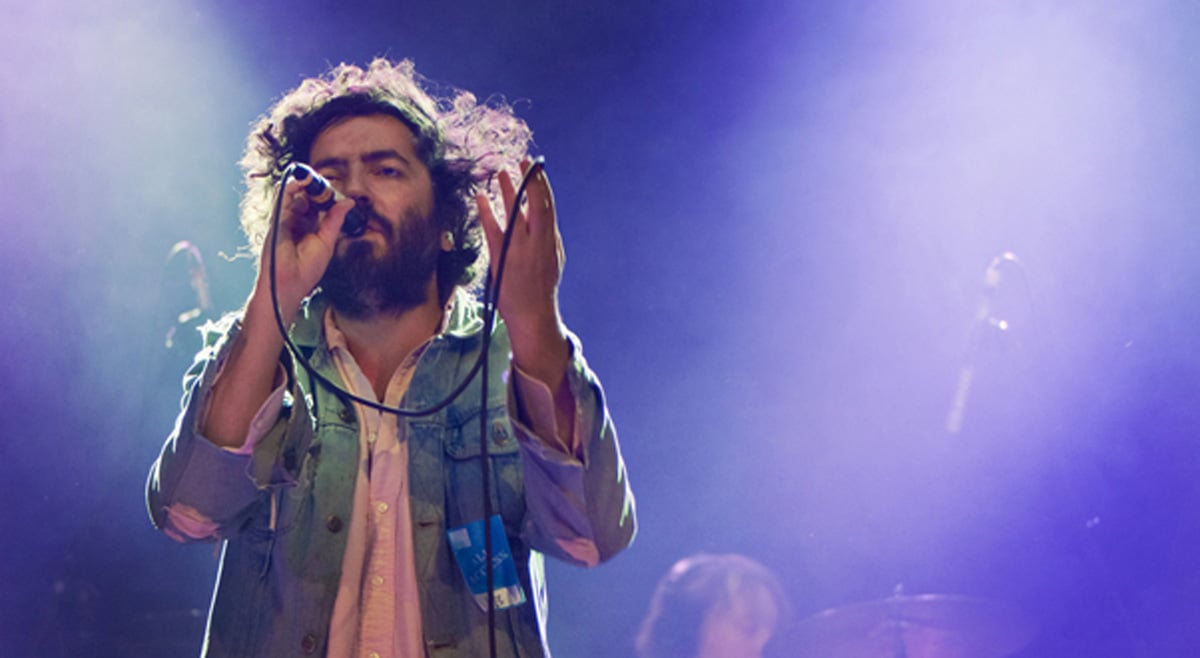 As singer-songwriters go, Dan Bejar is a case study of ironic distance. He’s a key member of the critically esteemed indie collective the New Pornographers, where internal roles vary and founder A.C. Newman is most often cited as the leader, but with Destroyer, Bejar is indisputably at the helm. And while he brings a patented, glossy veneer to lyrics and inflection to both groups, that luster is paramount to Destroyer.

In support of January’s resplendent Kaputt, the eight-piece Destroyer landed in New York City’s Webster Hall on Sunday night. Unkempt and charismatic, yet pensive and hardly the most adventurous of singers, Bejar demands a strong supporting band, which he certainly has in the robust lineup of dual guitars, bass, trumpet, saxophone, keys, and drums. Most of the set tapped songs from the band’s latest album, a delicately understated record, convicted in its balance of sound and style. Fusing art rock with soft hues of electronic and jazz forms, effervescent (“Chinatown,” “Kaputt”) yet adrift in waves of brass or synth drones (“Poor In Love”)—or sometimes both, as is the case with the lengthy “Bay of Pigs.” Oceanic and adaptable, the songs’ structures allocate space for improvisation, which Destroyer optimized live.

Joseph Shabason issued essential melodies and frills on saxophone and flute, notably during “Suicide Demo for Kara Walker,” while trumpeter JP Carter sustained long, sloping lines that he warped in volume and distortion with a switchboard by his waist. Bejar’s sedate, sleepy-eyed singing—less pronounced than on the record—intermingled, assuming a more conversational air. “I know you and I know the score,” he sang on “Chinatown,” burying one hand casually in his coat pocket. Later, as other songs demanded denser stanzas, he read from, if not touted, pages of loose-leaf paper with lyrics, throwing them haphazardly into the crowd after completing the freeform half of the post-LCD dance epic “Bay of Pigs.”

On “Downtown” Bejar sang, “Held a candle to the window, then the door/Saw the features of the world light up, oh Eva, your face,” before rattling, “I was a four-leaf clover/I was a Red Rover on his way over to your place” into too-narrow a cranny of musical bars—much to the delight of the audience. That shift from poetic to inane, and the faux-urgency along the way, crystallizes Bejar’s layered façade within Destroyer’s most recent incarnation.

The non-Kaputt tracks the band worked into the set, like “Painter in Your Pocket,” were decidedly lighter and mostly from 2006’s Destroyer’s Rubies. But the evening belonged to the dreamy atmospheres of the band’s latest album, like the whirling abysses that open “Suicide Demo” and close “Downtown” and “Kaputt.” During these reflective interludes, Bejar could be seen crouched down, quietly observing his bandmates’ musical choices. By default, he was the focal point, but Bejar’s instinct to detach himself magnified his supporting cast.

Check out more photos from the show here.