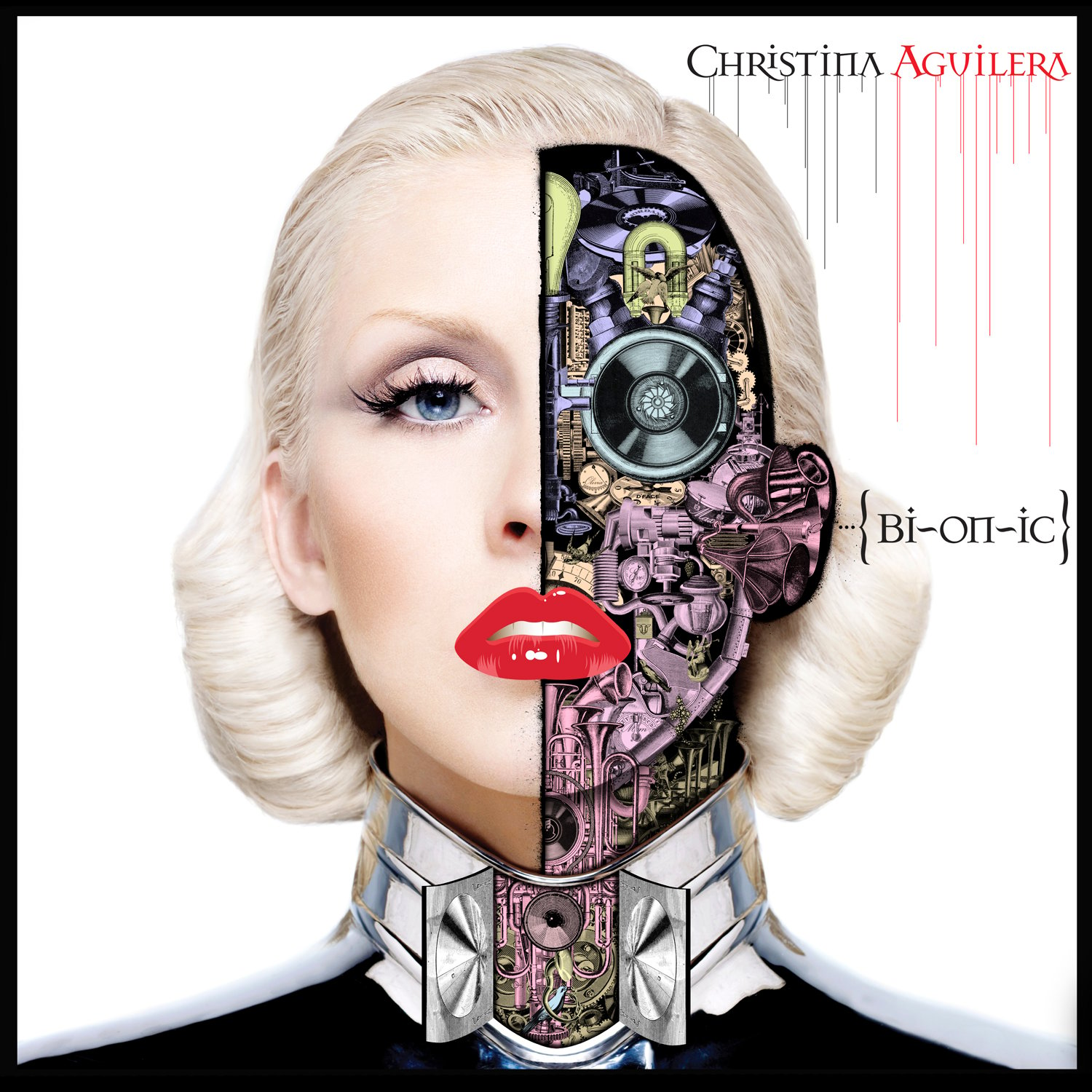 After spending more than a decade being only passingly entertained by either, it’s not like I really want to keep defining Christina Aguilera by comparing her minxy Betty to Britney Spears’s voracious Veronica. But Christina makes it so easy when she snaps up the beat from Britney Bitch’s “Gimme More” for the leadoff single of Bionic, her long-awaited follow-up to 2006’s Back to Basics. She makes it easy when, in said leadoff, “Not Myself Tonight,” she dares to utter the word Britney only spelled out in the still puzzling single-entendre of “If U Seek Amy.” She really makes it easy when she tries to one-up the Playskool procreation balladry of Britney’s “My Baby” by actually prefacing her own musical version of mom jeans, “All I Need,” with a few vocalizations from her toddler son Max.

Unfortunately, it’s her similarities with Brit that give Tina her humanity. Because the differences—her vocal showboating, her too-careful balancing act between club bangers and power ballads, her conceptual rebound from Back to Basics’s retro into Bionic’s futurism—all confirm her as a living, humping, belting calculation. (She doesn’t help matters when she agrees to slap cover art on the new album depicting her as a jigsaw Robotron with more mechanized cogs spinning behind those pouty lips than Androids have apps.)

On the surface, Bionic is as efficient a pop entertainment as was Circus. For two-thirds of its running time, it pounds four on the floor, and then spends the remaining third ponying up to the bar while the string of slow jams bores almost everyone silly (except for all those winsome little waif boys in the corner whose lives were saved many times over by “Beautiful”). Aguilera’s handpicked cadre of writers and producers—M.I.A., Christopher “Tricky” Stewart, Le Tigre, Peaches, Sia, Polow da Don, the son of Chic’s Bernard Edwards, and, on the deluxe edition, Santigold and Ladytron—are eclectic and intelligently applied, if not necessarily the first group of names you’d select for a project intended to predict the future, like an album-length reincarnation of Donna Summer’s “I Feel Love.”

But it’s all in service of routine pop sex, the sort of standard-issue sleaze that Christina’s “Dirrty,” a monument in maladaptive eroticism, stood in stark contrast against. With Bionic, she takes the cash, she cashes the checks, she shows them the diva snatch they want to see. She, having digested Gaga’s muffin, builds up an appetite for infantile genital tagging by extolling the savory qualities of her “Woohoo,” in which she chants, “All the boys think it’s cake when they taste my woohoo/You don’t even need a plate, just your face/Licky, licky, yum-yum.” Icky, icky, ho-hum. (Throughout the song’s husky double-time sex hustle, Christina’s mantra “woohoo” is repeated ad nauseam, filtered so as to register as a cowbell.)

Elsewhere, in “Elastic Love,” she flatly points out that her use of the lyric “rubber band” is a metaphor, an observation rendered totally redundant by M.I.A. and company’s sonic Kegel exercises. If analogies fail, boy does she make her bid to grab the gays back from the clutches of Gaga explicit. Considering “I Hate Boys” (except the ones who kiss boys) is closer than I ever thought Christina would ever come to recording a Daphne Aguilera track, it’s ironically also one of many tracks on Bionic that sound tailor-made to accompany the opening credits of Johnny Weir’s forthcoming reality show. None more so, though, than the masquerade ball that is “Glam,” a top-heavy cocktail that mixes one part “Vogue” with two parts “Technologic” and serves with a snap.

Sure, her voice remains full, brash, and loud. Whatever it is she’s trying to say, she puts it out there with the conviction of a tornado siren with a 10-inch dong lodged in its throat. But ultimately, so much of what passes for hedonism on Bionic feels synthetic and compulsory. “Sex for Breakfast,” shallow orgasms for lunch. The lube-slick but water-soluble Bionic is a party album without a guest list, a sex toy used without self-awareness.