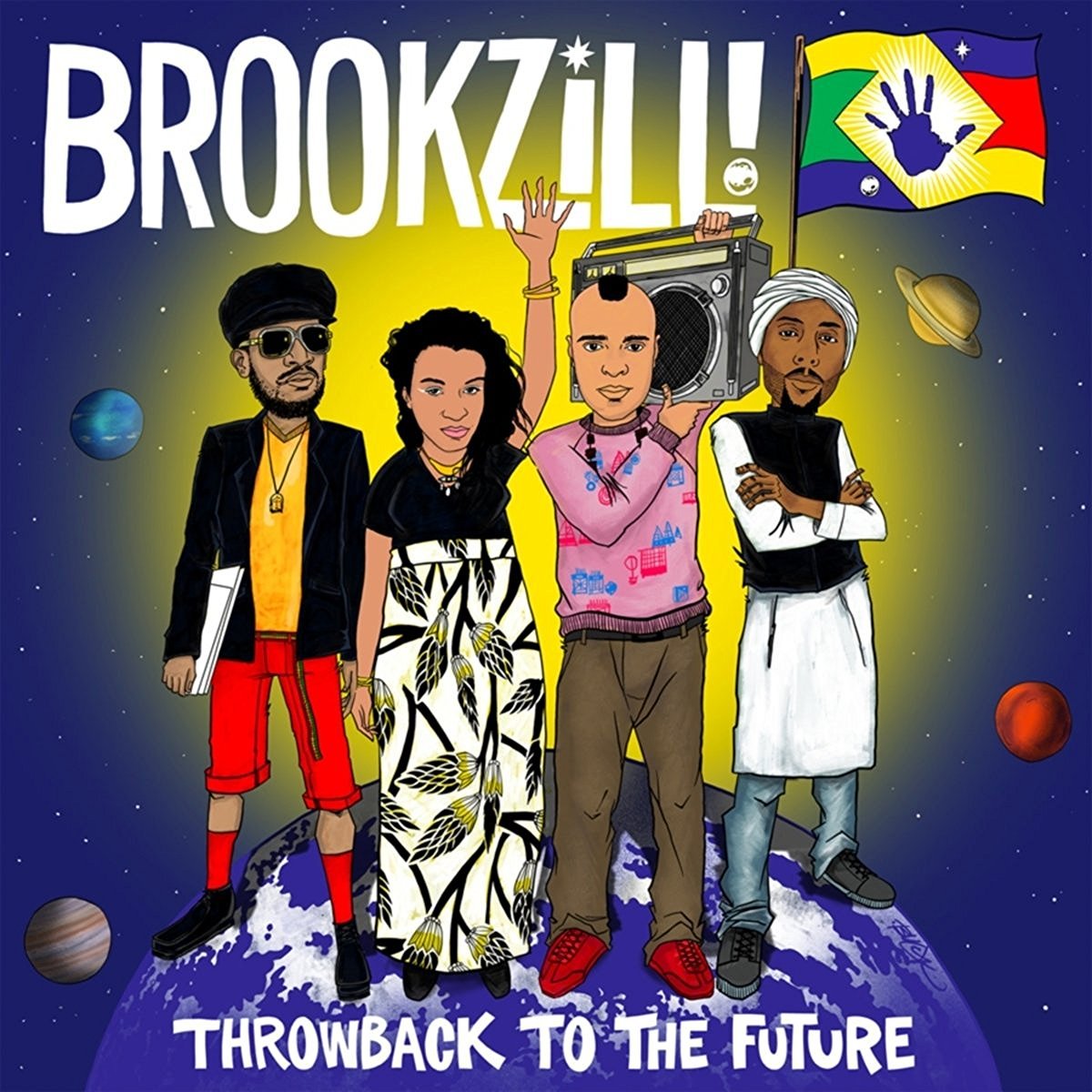 Prince Paul has been, most notably since his seminal work on De La Soul’s debut studio album, 3 Feet High and Rising, an interpreter of hip-hop’s capacity for concomitance and occasional conflation with other genres, styles, and art forms. His work with the Gravediggaz built free-jazz tremolo and skronks as well as samba percussion into Wu-Tang’s austere tracks. With BROOKZILL!, a super group consisting of Prince Paul, Ladybug Mecca of the great Digable Planets, Brazilian MC Gorila Urbano, and producer Don Newkirk, the producer offers an interpretation of hip-hop, a genre dependent on words, as capable of transcending language barriers.

About half of the lyrics on BROOKZILL!’s debut, Throwback to the Future, are in Portuguese, but this doesn’t obscure the album’s overarching themes of unity, tribute, and spirituality for non-native speakers. While they possess more polemical meanings, certain words and phrases, like “macumba,” a Brazilian religious practice, will ostensibly be accepted at face value for its celebratory invocation on “Macumba 3000.” Macumba is an encapsulation of BROOKZILL!’S syncretic purpose: bringing people together under the banner of music.

BROOKZILL’s cultural synthesis wouldn’t be possible without the skillfully realized instrumentation: 808-style breakbeats are masterfully mixed with samba percussion on “Raise the Flag,” “Mysterious,” and “S. Bento MC5,” creating unexpected rhythms, but ones which still make sense within a traditional hip-hop framework. On “Nascido No Céu,” bossa-nova horns and woodwind instruments align with synthesizers and turntablism to lay slow-jam groundwork for Ladybug Mecca and Gorila Urban’s rhymes. Though the beats never threaten to become generic like on “Mad Dog in Yoruba” and “BROOKZILL Suite,” which lean more on the album’s Brazilian musical influences, they emphasize Throwback to the Future’s individuality and cross-cultural appreciation in a way a more streamlined mash-up would not.

The album’s two biggest disappointments are Count Bass D and Del the Funky Homosapien’s guest verses on “Saudade Songbook” and “Maralém,” respectively. Post-production vocal overlaps connecting one bar to the next contribute to a feeling that Bass D is displaced from the track. Del is as adept at rapping about metempsychosis through technology as he is at giving hygienic advice, but his inimitable style is hardly glimpsed in a verse of unfocused anecdotes connected by a condensed remembrance of his childhood. Other than “Tanisha” preceding the word “peaceful,” he relies on dull rhymes like “contest” with “best” and “Smurfs” with “wurf.” These two verses also feel out of place on the album because, in their flow, they seem to be unaffected by the Brazilian flavor of the music.

Maybe polyglotism, besides hip-hop’s versatility with American dialects and musical languages, is too obscure to receive a mainstream embrace. But at the same time, it seems a natural progression for forward-thinking MCs and producers, since many of the most linguistically talented rappers like Ghostface, Busdriver, and Aesop Rock have advanced lyricism through their diverse vocabularies and prosodic contrivances. It’s reminiscent of a passage from Finnegan’s Wake: “and the rhymers world was with reason the richer…to the balleder of which the world of cummanity singing owes a tribute for having placed on the planet’s melomap his lay.” Therein is BROOKZILL!—new geographer’s of the melomap, the musical representation of the world.