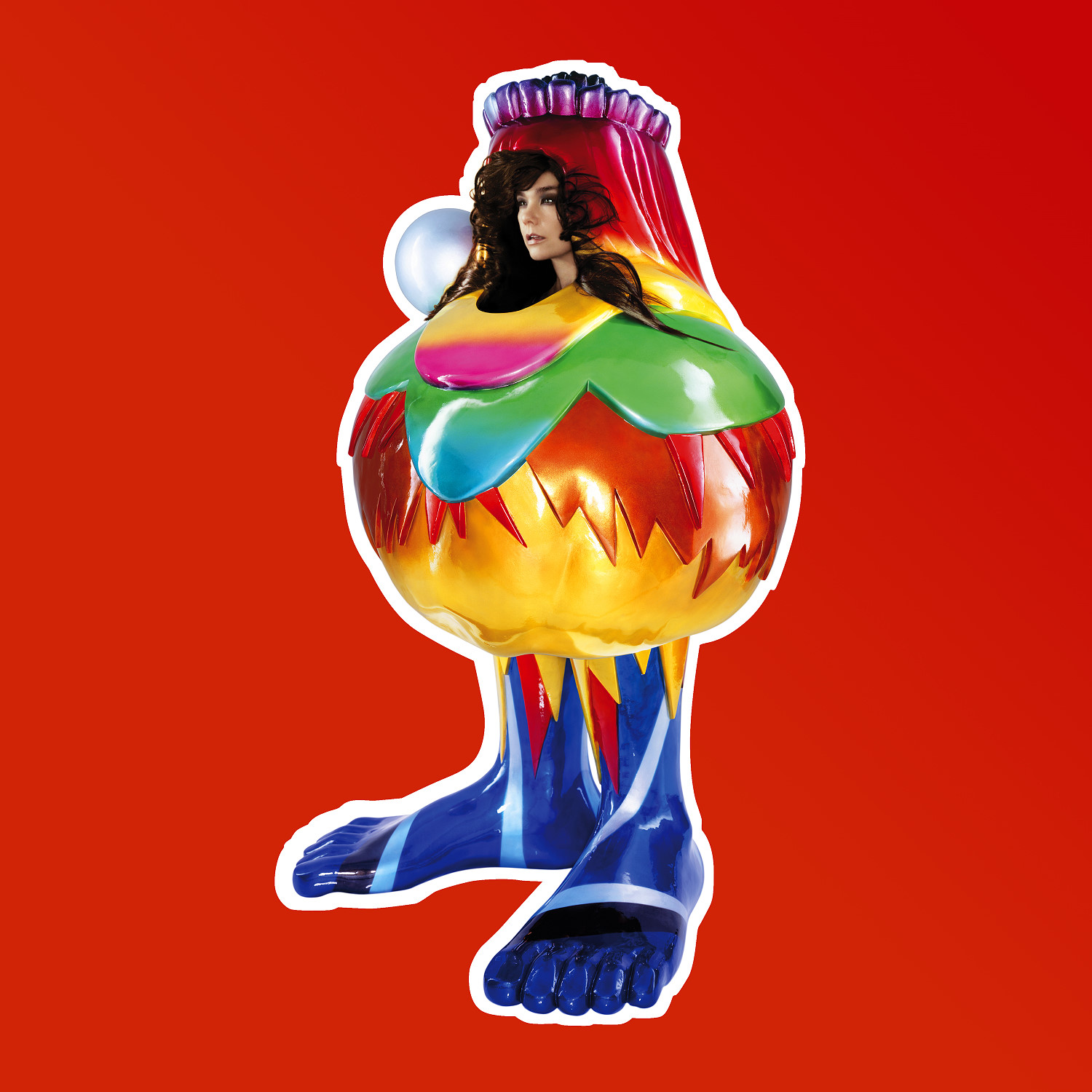 Our story so far: Björk begins her musical career singing cute Broadway cabaret music in Icelandic and achieves international fame singing with art-rock band the Sugarcubes. She reaches superstardom with a series of increasingly loopy but gorgeous electronic-pop solo albums that prove she’s not only a memorably deliberate vocalist, but also something of a precocious songwriter with a love for mixing analog and digital instruments into one heady brew. She drops the violently happy house party aesthetic and begins favoring the serious, the poetic, and the melodramatic when she moves from working with collaborators like Nellee Hooper and Tricky to the likes of Mark Bell, Lars von Trier, and Matthew Barney. The shift first results in the titanic 808 Philharmonic masterpiece Homogenic and the deceptive, darkly sex-obsessed Vespertine (Björk’s Erotica?). Eventually, she loses the plot and releases back-to-back exercises in inaccessibility: Medúlla, which buries a few brilliant compositions, some among the finest she has ever written (“Who Is It” and especially the almost religious coda of “Mouth’s Cradle”), among muddy a cappella art-fuckery, and the frequently unlistenable soundtrack to her boyfriend Barney’s often unwatchable Drawing Restraint 9.

You can imagine the roar of relief that accompanied early reports that Björk’s next album would find her emerging from her increasingly hermetic cocoon, would hear her declare there’s more to life than deliberately defying expectations, and would see her return to the world of—and the descriptor has appeared in every interview she’s given over the months leading up to its release—“fun.” How, with Timbaland along for the ride (so long as he, not Antony Hegarty, was allowed to sit shotgun), could Volta not be? Why else would its release date appear at the cusp of the season of tops down (and off) instead of the season of decaying leaves and dwindling sunlight? What else does that spooky voice wailing over the chorus of its lead single, “Earth Intruders,” sound like if not the clichéd, 96kbs opera vocalist that seems to accompany the soundtrack of every video game commercial that’s ever been broadcasted on Adult Swim?

If I personally remained skeptical that Volta’s promised party in a Digipak box would also represent a return to the heights of, if not Homogenic, at least Post, it’s probably because I’ve never trusted Björk’s entirely conceptual approach to “fun,” at least not as far as her upbeat techno tracks were concerned. When tossing out names for Slant’s list of 100 Greatest Dance Songs, I smacked a fairly across-the-board veto on allowing Björk to show up on the list (admittedly after nominating the radio mix of “Alarm Call,” what with its jacked-up tempo and rubbery, proto-Jaxxian bassline). My argument was that, ever the resident alien ethnographer, she always had a knack for making dance music seem resolutely academic. I’m reminded of a column Rob Sheffield wrote in Rolling Stone in 2001 in which he compared Daft Punk’s “One More Time” unfavorably to Janet Jackson’s “All for You,” suggesting the former act approached disco as deconstructionist parlor trick whereas the latter was too busy skating around the roller rink to spend more than 10 minutes writing the song. (Never mind that he was as wrong about “One More Time” as he was right about “All for You.”)

Every song on Volta sounds like it was birthed in no fewer than 10 months, if not five years. “Fun” hardly has an opportunity to enter the picture when Björk’s now seemingly permanent fastidiousness remains her métier. (That’s to say nothing of the questionable diversionary value of the lyrics of, for instance, “Hope,” in which she muses, “What’s the lesser of two evils: if a suicide bomber, made to look pregnant, manages to kill her target or not?/If she kills them or dies in vain?”) As far as I’m concerned, that’s not an entirely unfortunate development even if it is a predictable one. “Earth Invaders,” one of the three Timbo collabs (Timbo’llabs!), recalls “Human Behavior” and “Army of Me” but gurgles with a more straightforward marching tempo, squelching acid synthesizer lines, and a snapping high hat (more focused in Mark Stent’s extended single edit). “Declare Independence,” which begins like an outtake from Telegram, grows in amplitude and hysteria until it almost eclipses “Pluto.” (If it doesn’t quite, it may be because the latter was inspired by a fan’s videotaped suicide, whereas the former is apparently dedicated to the country of Greenland.) Two of the album’s most galvanizing moments—the ominously rolling dirge “Vertebrae by Vertebrae” and the volcanically expansive “Wanderlust”—envelop Björk completely within the emotional landscapes of “Jóga.”

Not everything is very much fun, even abstractly. If it turns out that the Britney Spears-in-hell vibe of “Innocence” was not the rhythm track that Timbaland alluded to as being an outtake from his solo album (the implication being it wasn’t good enough), I’ll eat Björk’s costumes from Dancer in the Dark—whatever’s left of them, I mean. And, in the album’s two collaborations with Antony Hegarty, Björk’s finally found a vocal sparring partner whose voice is as much, if not more, an acquired taste than her own. Brave? Sure. Good? Not so much. The seven minutes of cooing and over-crisp enunciation on “Dull Flame of Desire” are enough to send just about anyone bounding for their “Venus as a Boy” maxi-single.

Then again, it’s an unavoidable truth that the 1990s are long gone and disco revisionism isn’t exactly the premier vehicle for fun these days. What works on Volta will probably endure as long as what (little) worked on Medúlla, so expectations should probably be recalibrated. It could simply be that we were all expecting the wrong thing in hoping for the little princess to resuscitate her 808.

Björk’s Homogenic at 25: Every Song Ranked