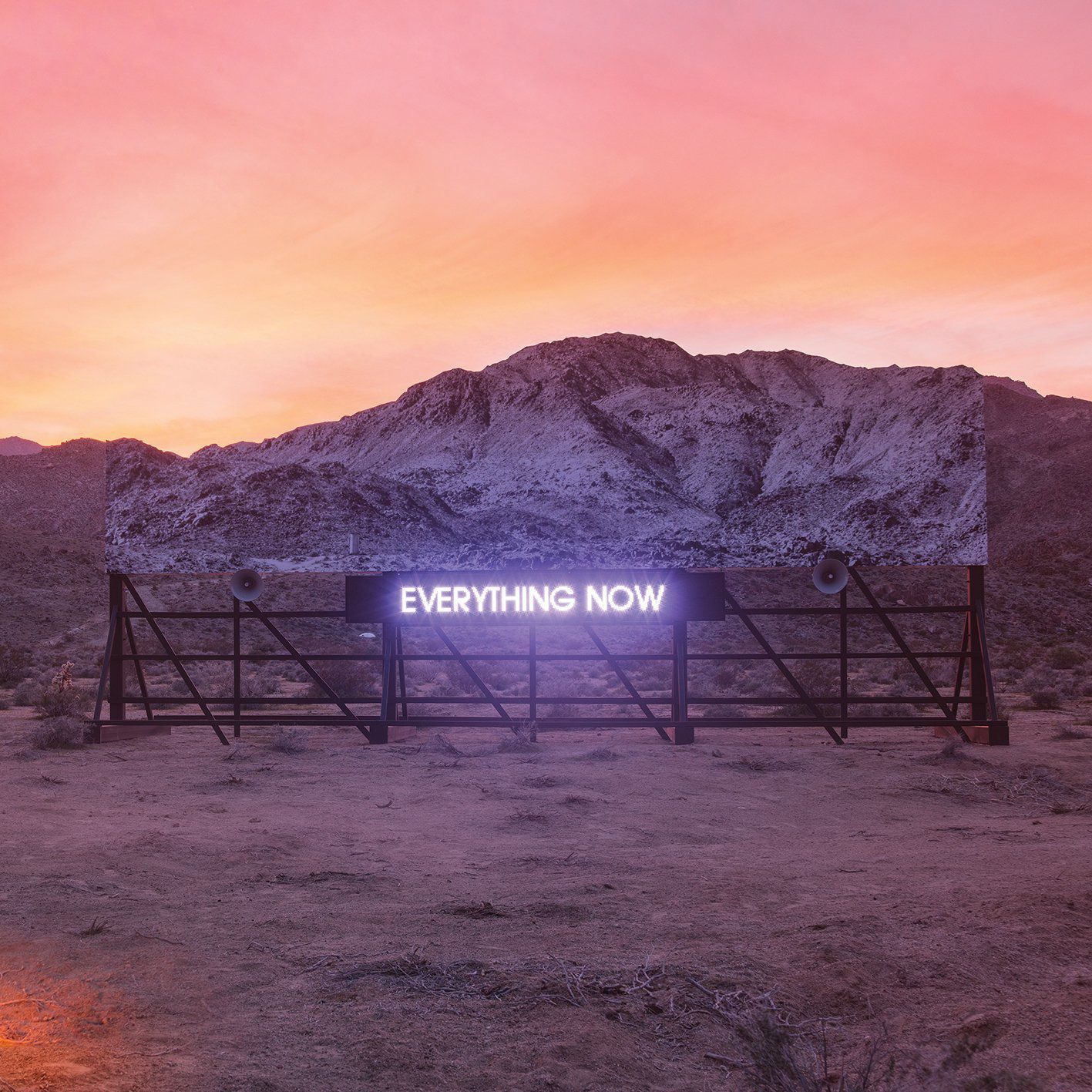 Win Butler’s tendency toward increasingly portentous freshman-level pop philosophizing about the dilemmas of the technological age reached an at times unwieldy peak on Arcade Fire’s 2013 album Reflektor. As a lyricist, Butler’s wheelhouse has always been various manifestations of teen angst—a driving theme on both Arcade Fire’s Funeral and The Suburbs—and the band’s new album, Everything Now, finds him once again singing mostly about “the kids,” as he so often calls them. But the album also marks a clear and surprising shift in Butler’s perspective: Rather than sounding crushed by the weight of the world, he seems more resilient, almost chipper. The result is by far Arcade Fire’s most upbeat and easily digestible album to date.

If there’s a case to be made against the emergence of Happy Win, it’s that Everything Now is the first Arcade Fire effort that doesn’t seem as if it was designed to be the most important album of our time. Detractors have derided them as “pretentious” for years, but that’s the price of the band’s ambition, from their massive roomfuls-of-people arrangements to Butler grandly delivering his proclamations as if they were religious doctrine. By that standard, Everything Now feels scaled down, in terms of both sound and theme. While Butler is still commenting on cultural vapidity, technological distractions, and the emptiness of modern relationships, he’s doing it in a more character-focused way that’s less reliant on lofty decrees. The album’s arrangements are, like those on Reflektor, heavily electronic but are far more nimble and intimate. In contrast to the over-serious and overlong songs on its predecessor, Everything Now’s best tracks abide by a reasonable principle: Dance music is supposed to be fun and, you know, danceable.

On the effervescent title track, Butler offers some Reflektor-esque commentary on too much instant gratification, sneering about how a world filled with immediately consumable content can quickly absorb a person’s sense of individuality: “We turn the speakers up till they break/’Cause every time you smile it’s a fake.” But the gravity of his statements is tempered by the brightly strummed guitars, ecstatic backing vocal choir, and radiant disco-tinged piano line. In terms of not just theme, but volume, “Everything Now” doesn’t feel at all like a betrayal of what Arcade Fire has always done: The overall sound is sufficiently huge, while the exotic-sounding pan-flute sample is in line with the band’s penchant for ambitious arrangements. Yet it stands alone as their most effortlessly commercial song to date, showing that Butler may have learned that if he wants to feed his audience messages, they go down best with a proverbial spoonful of sugar.

Only the album’s second single, “Creature Comfort,” surpasses the title track’s seriousness of purpose. Butler shout-singing along to body-slamming rhythm guitar about boys who “hate themselves” and girls who “hate their bodies” enough to pray to God to “make it painless” is heady enough; when he starts singing about a girl who attempted suicide with Funeral as a soundtrack (“Filled up the bathtub on put on our first record”), it threatens to veer into egomaniacal Bono-esque territory. Thankfully, Butler ultimately takes it back to somewhere intensely personal (“It was not painless/She was a friend of mine,” he gently croons on the bridge, adding real poignancy to the earlier verse). The song’s main point of accessibility is the sing-songy synth riff that Butler starts to wordlessly chant along to by song’s end.

The rest of Everything Now ensures that while it will inspire fewer think pieces (or suicide attempts) than any previous Arcade Fire album, it’s much better suited to building summer playlists. In pop music, sometimes it’s more effective to just give into the hooks and approach subversion with subtlety. “Signs of Life” may tackle the futility of seeking genuine human connection in the modern world but does so in a relatable context—dating and hookup culture—and sets it to a strutting Talking Heads-esque groove. Presented in two parts as separate back-to-back tracks in the middle of the album, first as a snorting punk rager and then as a slow, hazy country song, “Infinite Content” addresses the same concept of instant gratification culture as the title track. But it does so only blithely, serving mainly as a platform to fool around with genre and showcase the semi-clever pun that constitutes nearly its entire lyric sheet: “Infinite content/Infinite content/We’re infinitely content.”

Most unexpectedly, the band displays a dark sense of humor on the genuine romp “Chemistry.” The retro-sounding horns and stomping guitar paired with the skittering drums and stiff two-four rhythmic pattern intriguingly and somewhat ridiculously suggest Jack White attempting dub—a playful framework in which Butler adopts the persona of a “nice guy” who intently watches the object of his affections dance with other boys, all while insisting, “You and me, we got chemistry.” Creepy, yes, but the levity in Butler’s delivery allows us to laugh at his narrator’s pathetic delusions. Perhaps, like many of the other topics addressed on Everything Now, it warrants a more serious reading. But Arcade Fire has never sounded like they’re having this much fun before—and that’s a more than appropriate goal for a rock n’ roll album.