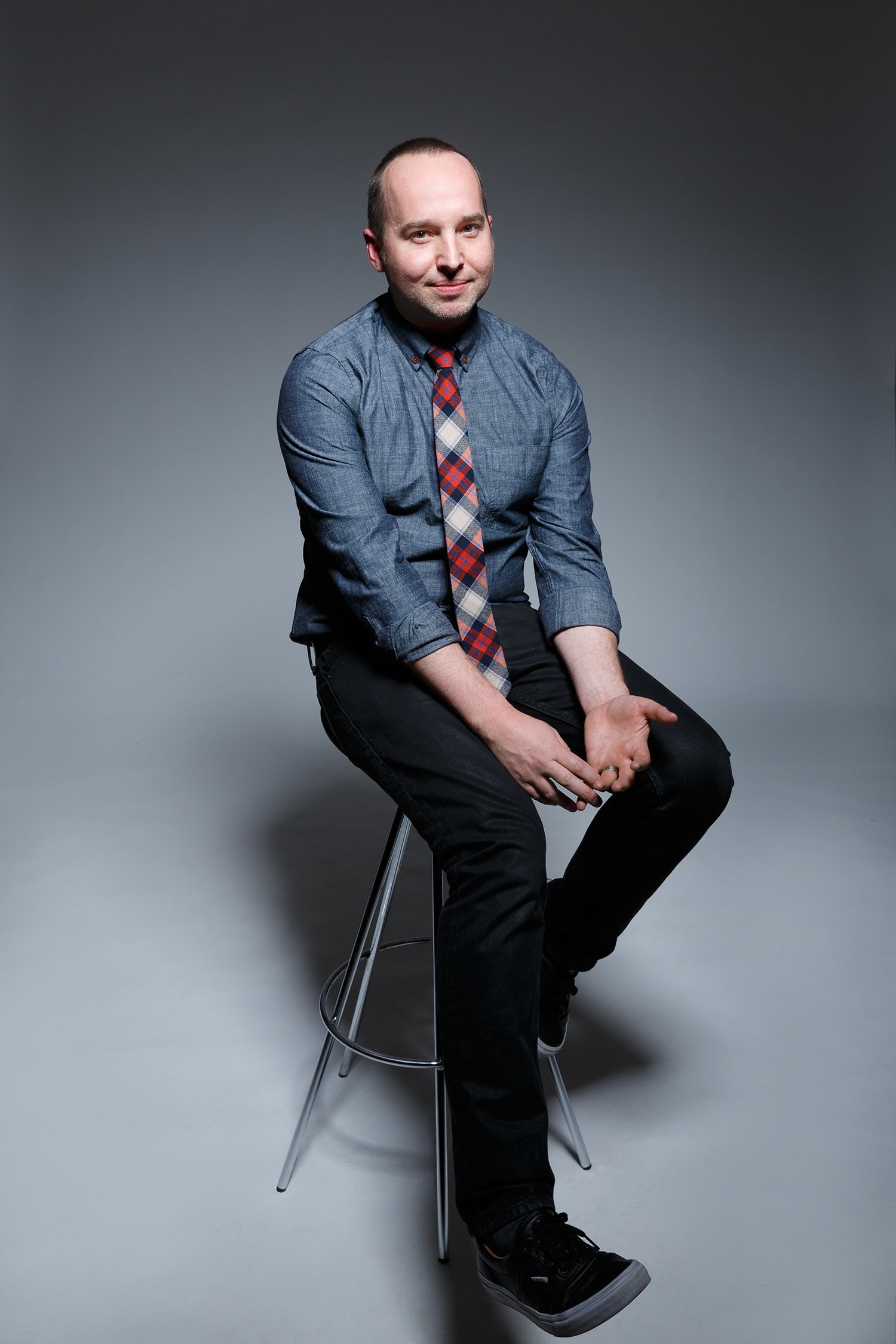 If there’s a constant in Jordan Harrison’s body of work, it’s his ability to surprise. For more than a decade, the 40-year-old Brooklyn-based playwright has conjured an amazing range of theatrical worlds: a house that shrinks around the characters in the mystery thriller Finn in the Underworld; the seemingly serene 1950s gated community to which a stressed-out contemporary couple retreat in Maple and Vine; and the near-future world of the 2015 Pulitzer Prize finalist Marjorie Prime, where artificial intelligence has been harnessed to help overcome ageing and loss. For his latest, The Amateurs, currently at the Vineyard Theatre, Harrison ventures back to Europe in the Middle Ages. The play follows a valiant troupe of players as they tour medieval morality plays across a continent being decimated by the Black Death. We talked with Harrison recently about The Amateurs, as well as his forthcoming Log Cabin, which will premiere in New York this summer.

You’ve said that you hate being asked where your plays come from, so instead, can you tell us what interested you in 14th-century Europe as a setting for The Amateurs?

Ah, yes, I have neutralized your question in the play itself! But, you know, maybe I will tell you where the play came from because that will make things easier. Like a lot of writers, I start by resisting, or running away, from the last thing I did. The play before The Amateurs was Marjorie Prime—where people stay on the couch and there aren’t a ton of production elements—so for my next outing I wanted to go back to my epic instincts, and maybe even try a three-act play, which I hadn’t done for a good 10 years. It was not the 14th century, rather the idea of the first flicker of humanism. I knew that there was this morality play of Noah’s flood. A famous thing about it was that the character of Noah’s wife behaves in this unexplainable and, I think, mainly unmotivated way. She doesn’t want to get on the ark. I felt interested in that in the same way that I’m interested in looking at a Giotto fresco and seeing this thaw from a world in which only God matters to a world in which human beings had choices. So it was more the circumstances of the 14th century. What was it about experiencing the Black Death that made humans more interested in humans?

Did research into the period inform the play?

It was helpful to be reminded that magic was real to these people—that a firefly was an unbaptized soul still looking for God, which is something that made its way into the play. They were constantly looking for explanations for the unexplainable. I think it was also useful to be reminded of their familiarity with death. People often wouldn’t name their children for a year or two years because they were just expecting them to die. They were very matter of fact about it, which isn’t to say that they didn’t feel it, but it played a different role in their lives than it does today.

Do you draw parallels in the play to AIDS in the 20th century?

It was a helpful allegory, for sure. This is tricky for me, trying to talk about act two and the parallels with HIV and AIDS without completely giving it away. I really did get to the end of act one, and it was going as I wanted it to go, but I had this impulse to get extremely frank and to hew out the subtext—to write about my own engagement with the play. Because there was a very real plague in my lifetime.

How do you see your engagement with the subject in the context of previous playwrights’ responses to the AIDS crisis?

I was 15 or 16 when Angels in America came out and that was one of the most indelible playgoing experiences I had as a young person. I had to sit sandwiched between my grandparents, who had bought us the tickets, and watch two men get it on. In a world where that wasn’t possible or wasn’t spoken but watch it be possible on stage—it was an incredible thing. It’s true that many generations have different responses to a crisis. You have The Normal Heart as one of the great first plays [to address the AIDS crisis], and then you have Angels, which introduces a little more magic and explodes the representation of that outwards. Now here I am many generations beyond. I will let other people say how I fit into that. But admittedly, as we get further and further from a tragedy or a crisis we respond to it as artists in different ways. I probably finished the first draft of The Amateurs in 2014 and there’s a crisis of another sort that has come along since then. So there’s ways in which 2017 and 2018 vibrates with the play in ways that I maybe can’t even control.

When talking about your work you’ve said that there are plays with furniture and plays without furniture. Can you elaborate on that?

The classic play with furniture is Chekhov. People have the chair, the samovar, and things around them to remind us of the nuances, the intimacies, and disappointments in their lives. [In these plays] time tends to move slowly in a world of naturalism. Marjorie Prime is probably the biggest example of that. Plays without furniture—the classic example would be Shakespeare. You can crush a month or a year from one scene to the next.

So is The Amateurs a “play without furniture”?

It’s certainly a play without furniture. We travel all the way across Europe and we jump 500 years at one point. You can actually do that because there isn’t anything specifically confining us to one time or another. On the first day of rehearsal, the [scenic designer] David Zinn said to the assembled cast and staff, “the plan is simply to fill the Vineyard Theater with dirt.” And that’s what he did. He’s given us this marvelous pile of dirt. I guess there’s also a twist in that there’s this one piece of supreme furniture at the center of the play—the traveling cart, the pageant wagon. Basically, I have asked David and our amazing props designer, Raphael Mishler, to create this box of wonders. It has to be something that the actors can move around on the space, but it also unpacks an entire world of the Noah’s flood play.

Since we are talking about set design, I should tell you that there’s something special for me about working with David Zinn on this production. David is probably the first time I was aware that there were other gay people in the room. I think I was maybe 13 years old and it was at the end of a show on Bainbridge Island [in Washington]. That’s where I grew up, and where David grew up. He had already been spoken of as the boy who made good in the big city and designed sets on Broadway. We had never even met before, so given the subject matter in act two, it’s special to me that he’s designing The Amateurs. He’s somehow threaded through the actual Jordan Harrison history that’s being discussed on stage.

What can you tell us about your next play, Log Cabin, which premieres this June at Playwrights Horizons?

To follow our analogy to its logical end, Log Cabin is a play with furniture again. It’s mostly one location—there’s books on the bookshelves. The furniture in this case is important because it’s the trappings of being upwardly mobile. Basically, the play is about a very close-knit group of friends—a gay couple and a lesbian couple—and the problems of gay assimilation. Essentially, it’s about how when you get your rights, when you get your foothold in society, how quickly we can forget about the rights of people that are coming immediately after us. It’s about [the characters’] stormy and problematic relationship with a male trans character. And the growing pains of this century.

Interview: Patricia Clarkson and Cillian Murphy on The Party