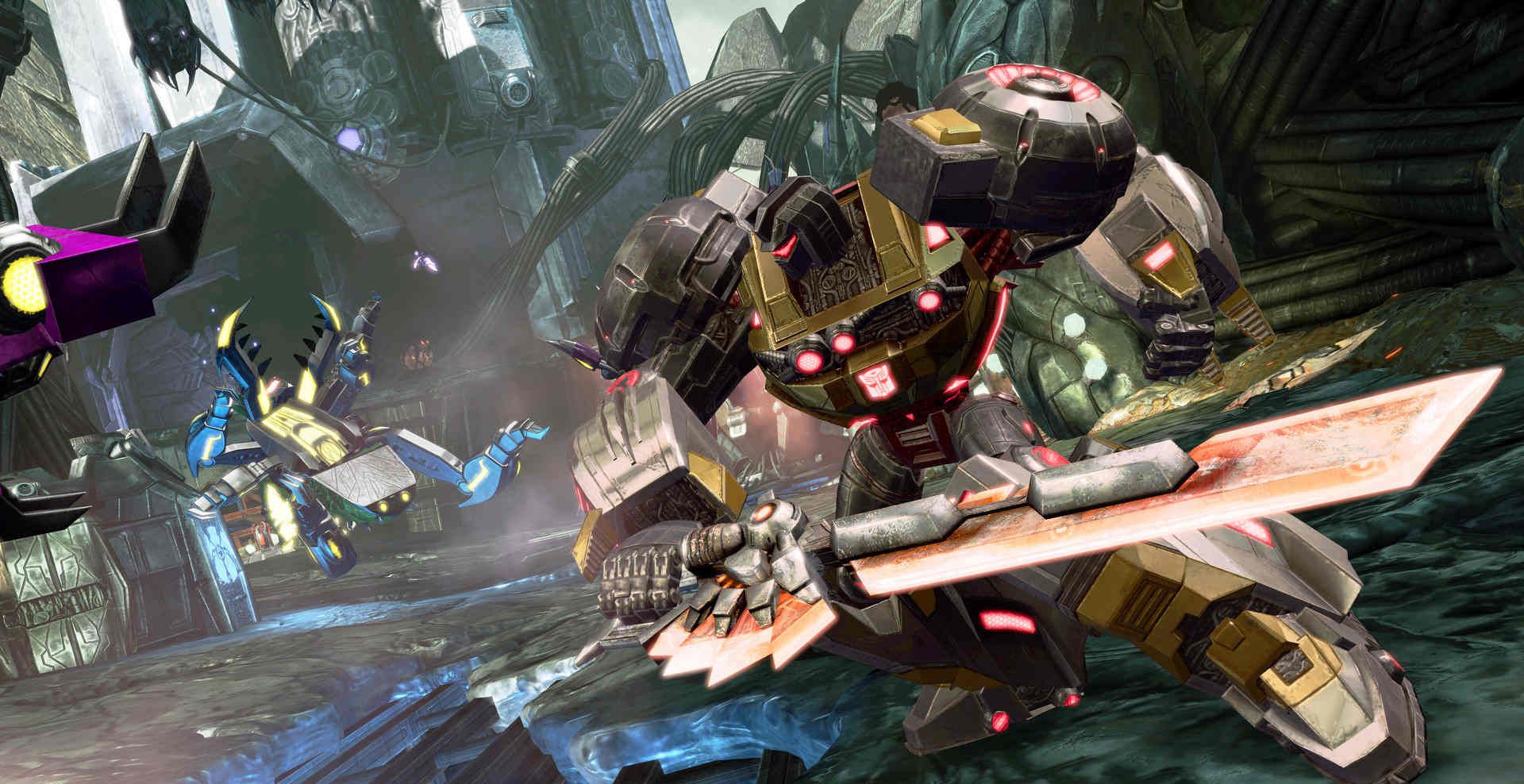 Transformers: Fall of Cyberton begins with an emotionally charged flash-forward, replete with the sort of grand heroism that Michael Bay’s poorly edited summer blockbusters failed to showcase. The Autobots have their metallic backs up against the wall as the Decepticon’s leader, Megatron, storms their mother ship. In this Energon-depleted world thrown into post-apocalyptic ruin after the events of Transformers: War for Cybertron, you first play as Bumblebee, the Autobots’ innocent “little brother” and puckish mascot. Throughout the crippled vessel, as smoke and sparks obscure corridors, his fallen allies short-circuit at his feet, some breathing soft apologies for not holding the line against the wicked opposing force.

The game’s serious tone and sharp presentation wonderfully belie a storyline that involves wisecracking, sentient robots transforming into insects, dinosaurs, race cars, and helicopters. The typical cover-based third-person shooter conventions lend a sense of sedate familiarity to the game while you control the various Autobots and Decepticons, and High Moon Studios punctuate each level with more gravitas than most so-called “mature” shooter titles. A video-game port of a weekly 20-minute pretext to vend action figures shouldn’t stir up so many emotions, right? It certainly can do just that. Without spoiling the seven-hour campaign’s first dramatic turn, Bumblebee showcases altruism in a way that’s only hinted at in the many cartoons and films. Such a theme is a surprise for a licensed game, and once time is logged into controlling these emotional machines, a true sense of heartwarming connection is felt.

The quality of the game’s variegated design also adds to this connection. Transforming from robot to vehicle forms during a heated firefight is fast and instantly pleasurable, and this capability adds another stratum of mobility, diversity, and stratagem to the game. Only a few frame-rate and late-game jumps in difficulty impede what’s essentially a solid narrative from progressing without fuss. High Moon addressed the unduly sequenced checkpoints from War for Cybertron, which make the absence of a three-player co-op mode within the main-story campaign less disappointing. Hopping back and forth between the good and bad robots is a geek’s dream, and the ability to choose sides during a pivotal point in the game is thrilling to say the least.

Any technical complaints lobbed at Fall of Cybertron’s sturdy gameplay chassis will be quickly thwarted once the scope and variety of the levels are assayed. While War for Cybertron seemed to take place in a diminutive portion of the Transformers’ milieu, Fall of Cybertron covers open environments with a true sense of character. The aforementioned three-player co-op mode wouldn’t logistically work in a diverse game that has the player switch between Transformers at every turn (each robot can dispatch enemies with weapons that can be upgraded).

The weapons are just as various as the robots that wield them, but the best set pieces happen while using each robot’s special abilities. No Autobot or Decepticon plays alike: Cliffjumper utilizes a cloaking device in his stealthy trash-compactor level; a city block turns into a hulking warrior with Metroplex; and the Dinobots turn into, well, ferocious dinosaurs. But Optimus Prime’s targeted artillery-strike move reigns supreme. A shower of bullets and hellfire will white out a large portion of the screen whenever it’s used, and the colossal explosion produces an echoing and deep bass note.

Once you’re done bashing in robot faces in as many ways as possible, Fall of Cybertron offers a surprisingly deep multiplayer experience. Time will tell whether the online fan support will sharply drop off once more high-profile shooters are released this fall. As it stands, the upgradeable and fully customizable four classes provide a fun challenge. The ability to turn into a vehicle can change the trajectory of a battle within minutes too. A Horde-esque Escalation mode can be downright tricky to beat without a well-oiled and communicative team. Overall, High Moon has tweaked the online portion of the game beyond the somewhat clunky War for Cybertron experience.

Online or off, High Moon Studios has surpassed expectations with their sophomore effort. It’s a rare treat to play a licensed game that’s so practiced and treats the subject matter with an air of sophistication and care. Hardcore Transformers enthusiasts will love the many Easter eggs scattered throughout the solo game and non-fans can expect a third-person shooter that delivers on its more-than-meets-the-eye pledge.