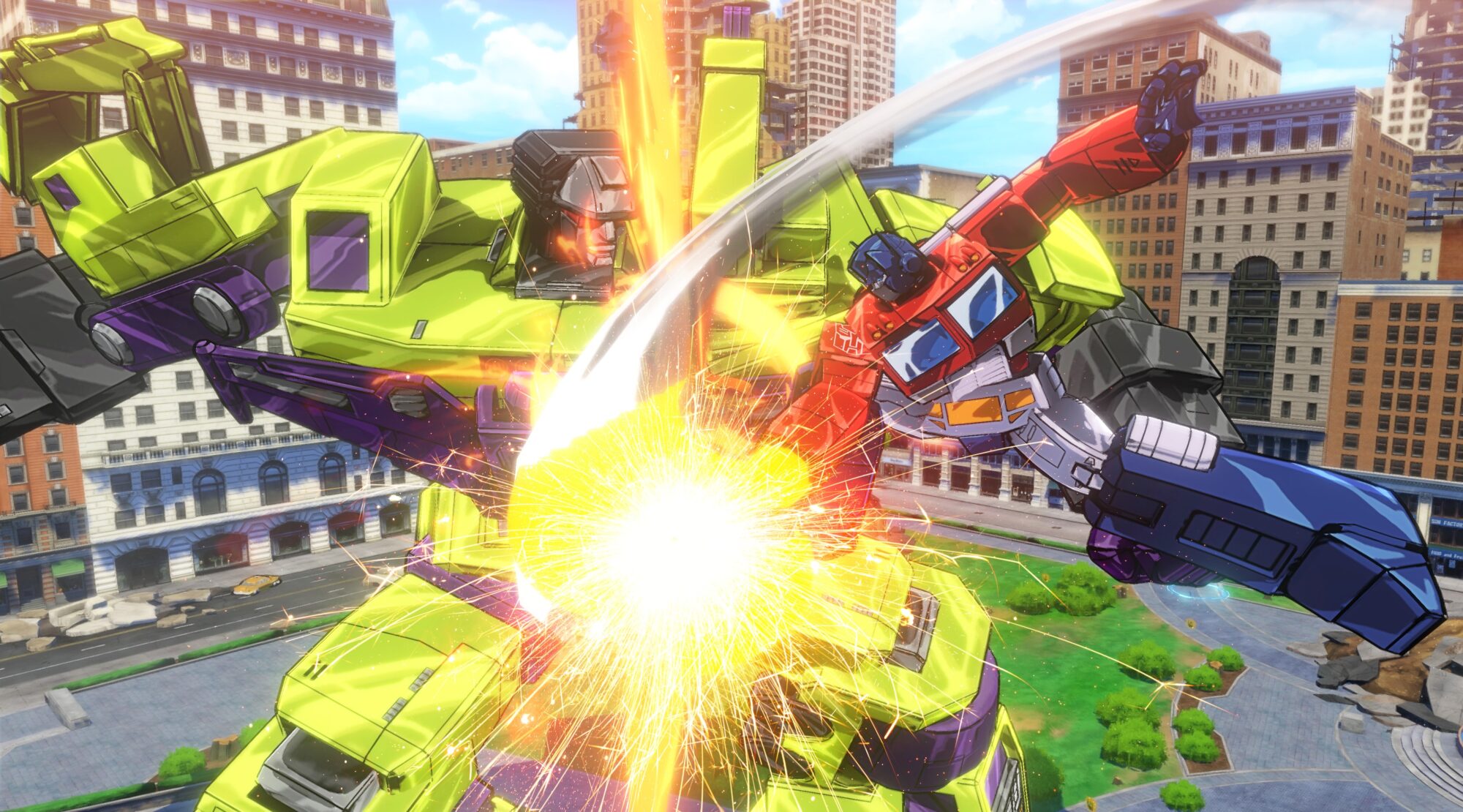 The massive robots in Platinum Games’s Transformers: Devastation feel as light and fluid in action as the spry witch from the developer’s Bayonetta franchise. They run gracefully and smoothly as they strike their enemies in rapid succession. The disparity between size and movement feels wrong, but the dissonance begins to fade as the player starts to finish off a few enemies. At the conclusion of a successfully executed melee combo, time slows as the transformer pulls back to morph into vehicle form before launching forward to deliver the final crushing smash. The distance to the enemy bot is traversed almost instantly, but the impact itself is drawn out. The timing manipulation, paired with the controller’s rumble burst and, then, a low-level one as the enemy flies back, really sells the transformer’s enormous girth.

This weighty sensation is as true as the lightness of the rapid hand-to-hand combat and slow-mo, diving evasions is false, but together they form a balanced whole. After all, a combat system based purely on brute force devolves to mere button-mashing. Here, finesse is required. To dodge an enemy strike, the player is asked to react to an on-screen flash with only a moment’s notice. Like Dark Souls, the game’s mechanic is demanding, but it’s not cheap. Platinum isn’t interested in tricks. Instead, they expect the player to rise to the occasion. The battles grow increasingly challenging at a steady, rewarding rate. Death is inevitable, but it isn’t rooted in failure. It’s meant to be instructive. Devastation isn’t a passive action game, because if the player pays attention, the opportunities to prove him or herself are abundant.

Of course, the opportunities are abundant because the Decepticons are trying to harvest the energy of Earth’s organic matter to power their return to the Transformer homeworld, Cybertron. Where else would the fate of humanity lay but in the hands of our heroic Autobots? The goofy writing is overly dramatic and self-serious, but it has its cheesy charms. Megatron’s maniacal quips are so bad they’re good: “In less than one Earth day, there will be no more earth days!” The story itself is convoluted and forgettable, with things with names like “Ferrotaxis” written in at almost every turn, but the game’s simple, heartfelt themes still shine through. The moral of the story—only when you stop living between worlds can you find peace in responsibility—may hit home for anyone who’s every struggled to decide where to settle down.

Devastation’s message is wrapped up in a complicated package, but it goes down easier because the game doesn’t last very long. The digital recreation of the original cartoon’s art style, with its simplified robot geometry and vibrant color palette, is dazzling. Dozens of Transformers have been modeled in their classic colors and programmed with varying behaviors. The variety keeps the combat fresh and new, but the transformation animations are slightly disappointing because the digital models fudge the geometry a little. It’s not a true transformation like the physical action figures.

Still, cruising around the streets in vehicle form really lets the open air of the city breathe, and the change in pace keeps the combat from growing monotonous. The spaceship interiors featured later in the game are stifling, bland, and repetitive in comparison, but the claustrophobia doesn’t last long. Soon, the Autobots return to the human planet on the brink of devastation, where their ultimate destiny of smashing every last evil bot into smithereens—to save humanity—can promptly resume.

Review: Dragon Quest Heroes: The World Tree’s Woe and the Blight Below