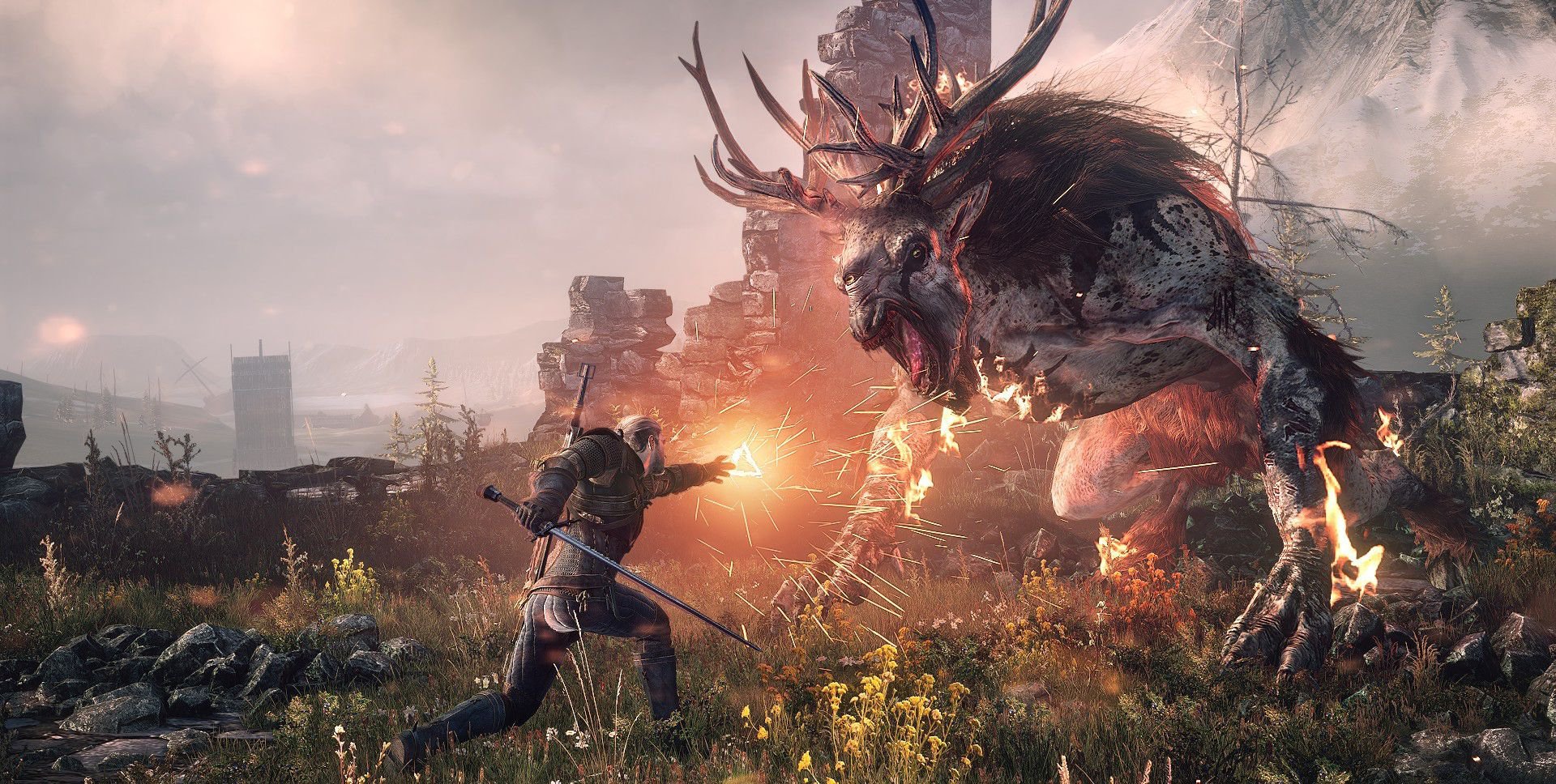 Geralt of Rivia may be the titular protagonist of The Witcher 3: Wild Hunt, but he’s also the least interesting part, and that’s both a blessing and curse. The war-torn Northern Kingdoms are the true star, filled with striking shots that bring Red Dead Redemption to mind, as are the dynamic characters that inhabit it, from the peasant who begs you to save him from bandits (whom he betrayed) to a former intelligence officer turned master criminal who requests your aid in assassinating a king. Geralt himself sits off to the side, making it all the easier for the player to step into his shoes—all the better, after all, to make these difficult moral decisions.

When every creature has such well-scripted motivations, the notion of “evil” becomes relative. For instance, the beehive-eyed Weavess, flabbily sewn-together Brewess, and necklace-of-ears-wearing Whispress look conventionally monstrous, but that doesn’t make the imprisoned nature spirit they wish you to murder any less dangerous; the sadistic hospital owner has some ugly fetishes, but it’s his soft-spoken aide who may turn out to be a religious fanatic, to say nothing of also being an elder vampire. Even the voiceless beasts merit compassion, whether it’s from the majestic musculature seen in your first encounter with a Royal Griffin or the doomed and tragic backstories that gave birth to each of the long-tongued specters.

Set against all of that, Geralt can’t compete, and unfortunately, neither can his swordplay. Being a witcher—a mutated and mercenary monster-slayer—is a job, and while the first few encounters with nests of necrophages or insectoid endrega can be harrowing, especially when set up as a boss fight, once a player has learned their weaknesses (handily but also explicitly revealed in the in-game grimoire), killing these creatures simply becomes a chore. And it’s one that’s exacerbated by a semi-open world in which you can easily, accidentally, chance upon creatures of a level far greater than yours. Most fights, especially on higher difficulties, become more of a matter of study and preparation than execution, with players needing to scavenge the landscape for herbs so that they can then brew the weapon-enhancing oils and ability-interfering bombs that work against each class of foe. The actual swinging of your sword—steel for human, silver for monster, though the game now automatically selects this for you based on context—is mechanic and repetitive, and the inclusion of five spells does little to liven up combat.

How lovely, then, that The Witcher 3 is so much more than a role-playing game’s general spin cycle of monster grinding and fetch quests. Contracts revolve as much around Batman: Arkham City-like investigations of gruesome incidents, complete with the interrogation of contradictory witnesses and the tracking of various smells, fluids, and footprints back to their sources, as with the confrontations themselves, and not all of them need end with swords being drawn. Quests don’t always boil down to bloodshed, especially those that occur in the “civilized” city of Novigrad: There are costume balls to attend, theatrical productions to bumble through, and cabarets to help fund and found. Experience is earned largely through quests, not battle alone, which highlights CD Projekt RED’s emphasis on thoughtful storytelling over mindless bloodshed.

Ironically, it’s that thoughtful storytelling that leads to the game’s only other weakness: FOMO, or fear of missing out. Skilled adventurers might be able to complete the main quest in 60 hours or so, but that’s leaving almost 100 hours of content on the table, none of which feels optional. As Geralt tracks down his adopted daughter, Ciri, who’s pursued by the mystical Wild Hunt, he’ll travel through the hamlets of Velen, which have been occupied by the Nilfgaardian Empire; Novigrad, which is in the grasp of the non-human-burning religious fanatics of the Eternal Flame; and the battle-hardened, Norse-inspired islands of Skellige, encountering old friends and erstwhile allies at every turn.

Side-quests organically weave out of this plot, then, and it’s hard to ignore the pleas of friends like the mage Triss, bard Dandelion, and dwarf Zoltan, especially to those who’ve played previous entries in the series. Monster contracts, too, are filled with intriguing bits of lore, as are the scavenger hunts, which often involve excavating old ruins in search of the crafting diagrams Geralt’s fallen comrades left behind. Even the entirely optional card game of Gwent—the best thing since Triple Triad—is captivating, with hundreds of cards to be bought and won. Only the horse racing feels tacked on, and that’s more to do with slightly unresponsive controls than its place in the world. There’s so much to do, then, that the stakes don’t always seem as immediate as players may be used to, especially when coupled with the fact that many of the branching choices have consequences that aren’t felt until much later in the game.

That said, this massive size only occasionally impacts players in a negative way: Inventory management, especially when searching for the right oils and bombs to equip, can be a pain, as is anything to do with crafting. There’s also a lot of NPC pop-up—that is, the game’s engine doesn’t always manage to load everything in time, which can lead to some awkward moments mid-quest when the player must idly wait for a foe or clue to suddenly appear. Given the overall quality of this much content, however, and given how often players will find themselves catching their breath after facing off with a wyvern or rock troll, gaping at the perfectly moonlit vista that awaits them after scaling a mountain or tower, Witcher 3 can be easily forgiven for having to occasionally take a pause itself.