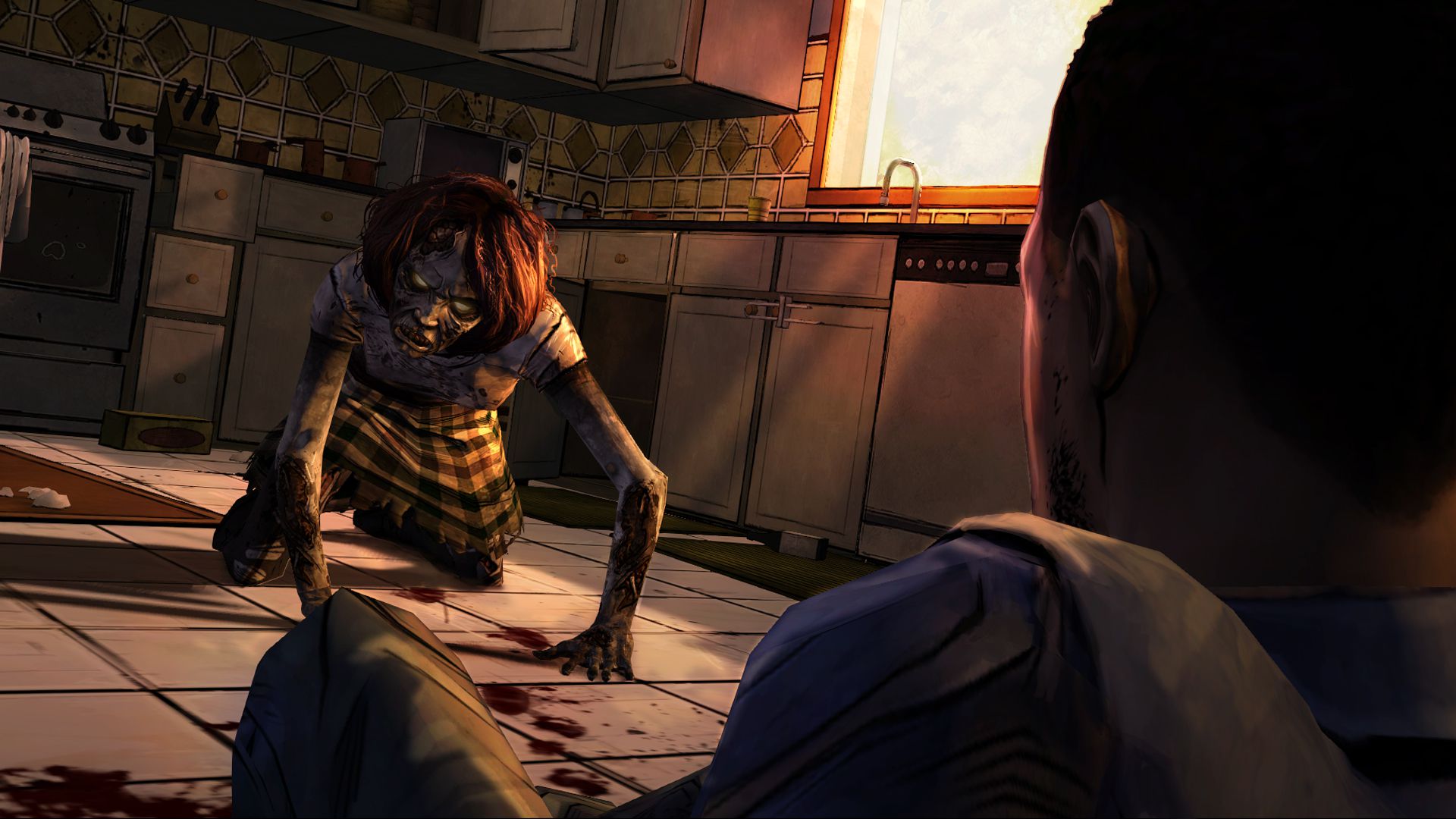 Robert Kirkman’s The Walking Dead is a bleak, apocalyptic comic-book series, and its characters’ moral choices are often as chiaroscuroed as Charlie Adlard’s art. Rick Grimes and his crew of hapless wanderers are burdened by the nightmares, moral impasses, and backbiting arguments that spiral outward from each decision. This is both a boon and snag for Kirkman’s long-running Image/Skybound series and AMC’s entertaining but inconsistent television adaptation, as both can bore and entice with longwinded conversations about morality and the state of an apocalyptic world.

Telltale Games realizes this can be a stumbling block for the zombie genre and throw their hat into the adaptation ring with caution. The Walking Dead point-and-click adventure game boasts both believable characters and a compelling storyline. Such attention to detail already vaults the game above AMC’s merely adequate television series. The smart game manages to nearly rival Kirkman’s original tone, vision, and aptitude for rich character detail. This comes as a surprise after the stodgy quick-time events that pockmarked the colossal misstep that was 2011’s Jurassic Park: The Game. The Walking Dead sidesteps all of that game’s faults and becomes one of the early great moments for player-driven gaming this year. The key to creating such an engrossing experience is the amount of player agency found throughout the startling debut episode of this five-part downloadable series.

As with any adventure game series, you often find yourself talking to other characters and solving faintly taxing environmental puzzles. Telltale has never been strong at puzzles, but they impress in the area of character development and to be more specific, conversation trees. Episode one revolves around choice. Sometimes it’s simply a matter of taking the time to get to know a character, or lying to cover your tracks. Elsewhere, your character may have to choose between saving a plucky reporter who’s a crack shot or a smart tech geek who helped you in a bind. Your choices are often permanent and logged for future episodes. This type of moral gaming is a hallmark of risk-taking games such as Mass Effect or Heavy Rain, but it’s a thrill to find a relatively small downloadable game exploring such yawning chasms of morality and emotion.

The intensity of bashing in a walker’s brains with a hammer or other sharp weapon dovetails into conversations with other members of your party. Exchanges aren’t only timed, they’re imperative to the through line and how it unfurls. The game’s main character exacerbates this tension as well because of his background.

The debut chapter of the video-game series, titled A New Day, centers on Lee Everett, a mysterious, affable, and well-written main character. At the beginning of the game his head is hung low, and he already thinks his life has reached a pitiful terminus as he sits in the back of a police car. Did the English and history professor really murder his wife’s lover? Should we be rooting for a man like him? Telltale isn’t afraid to ask these queries, and Everett’s interactions with other survivors in the greater Atlanta area will send ripples throughout the game’s world.

The emotional center of the game is revealed early, after Everett escapes a small cadre of the undead and stumbles into a suburban housing development. He finds Clementine, a brave first grader holed up in her tree house who helps you slay her undead babysitter in one of the game’s many grisly death scenes. Like AMC, Telltale doesn’t pull any punches in the gore and violence department. Blood splatter streaks across ceilings, furniture, and floors like a brutal form of calligraphy in nearly every environment. Everett plays as Clementine’s surrogate father from then on, and the adventure begins with a shudder and a shamble, death panting around every dark corner.

The highly interactive nature of this game harkens back to the hardened faces that populate Kirkman’s universe, but Telltale’s adaptation stands alone as its own artistic achievement. The controls are not as clunky as previous Telltale ventures, and each QTE is harrowing because of the subject matter and not because the controls are driving you loopy. Fans of the comic books and TV show will notice a few familiar characters, and the great part is that most of the new characters detailed for this series are just as remarkable.

Three save slots beg players to replay the game and approach each situation from an opposite angle. Instead of telling the truth, you can lie, or you may save a different person from a walker attack. In a few instances, a second playthrough wasn’t met with a wholly different outcome and a negligible amount of conversations didn’t mesh with previous decisions. This was slightly disheartening, but Telltale mostly achieves their goal of creating a relatable main character and interactive story. (Interesting side note: After the credits roll on episode one, you can see the percentage of other gamers that sided with your decisions or chose a divergent path.)

A profoundly intriguing narrative is a thrill to experience, but The Walking Dead also manages to be a solidly playable game. Whereas Telltale’s controls for Back to the Future and Jurassic Park were sometimes twisted and unrefined, controlling Everett is straightforward. You can punch, kick, or scurry away from blood-thirsty walkers with ease, and a reticle-based targeting system is intuitive when time is slipping through your fingers. You move the reticle with the right analog stick and move your character with the left.

Each area of the game is also limited in terms of space, so you won’t be wandering around for too long trying to figure out what to do as Marty McFly did in Back to the Future’s playable environments. Telltale does offer an easy mode that makes all of the clickable spots on your screen stand out with a gleaming white dot, but these markers can diminish the fun factor that comes alongside investigating a three-dimensional adventure game world.

And this game’s world is a wonderfully cell-shaded environment that engages well with its comic-book roots. The black outlines of cars, characters, and buildings vacillate between the starkness and vibrant pop aesthetic of a comic. This is a scrupulously handsome game from beginning to end, one that has every piece in place for a riveting experience for the coming months.