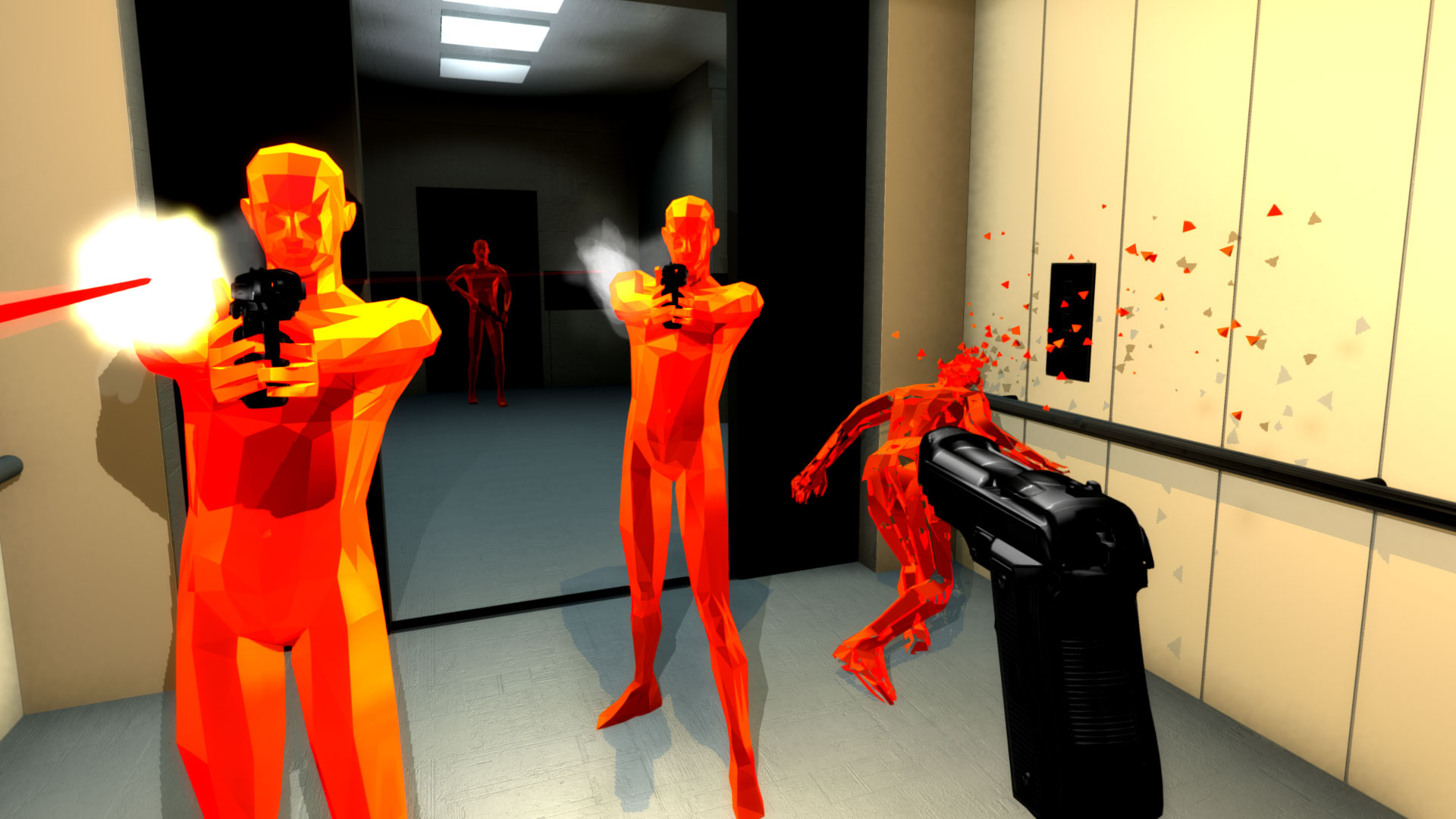 A black shotgun hovers in midair above the gap between two train cars. A reddish, pixelated silhouette is frozen in place on the roof of the compartment, arms desperately reaching out for the weapon. Everything else is white, presenting a stark scenario, for as the player takes a step forward, so does that crimson enemy. The shotgun starts to fall and that far-off tunnel grows a little bit closer. This is the overwhelmingly slick premise of Superhot in action, or strategic inaction: “Time moves only when you move.”

Think of the coolest, most impossible-seeming fight sequences in action movies, the ones in which the greatly outnumbered hero somehow takes out a room full of enemies. That’s every level from Superhot. Not for nothing is one lengthy corridor called “OldBoy.lvl,” or another “FightC.lvl.” There might not be any “Matrix.lvl,” but that’s probably because of how implicit that source material is in both the game’s mysterious plot and slow-motion style. At first, the story doesn’t seem as seamless as the gameplay, especially when the narrative unfolds through preachy fake chats that occur in the player’s “real world,” depicted as an ‘80s-era MS-DOS terminal that’s recently installed “superhot.exe.” Thankfully, the disconnect between these so-called worlds is used to great effect, and Superhot nails its denouement about mindless violence far better than the similarly themed Hotline Miami.

Of course, that’s because Superhot is anything but mindless. Its methodical, stop-motion approach to gameplay forces players to be as economical as possible, as even the once-routine act of turning to the left or right gives enemies an opportunity to move. Gunfights are solvable bullet mazes, which makes Superhot the most authentic first-person puzzler, especially once players unlock the secondary ability to “hotswitch” into any enemy’s body. The aesthetic minimalism, which fades each area to a muted white, is intentionally dull, there to help players better focus on interactive objects and threats (as in a more extreme version of Mirror’s Edge). Even the bright, bloody homogenous red used to identify each target serves to make a point about the way shooters often dehumanize enemies. One need look no further than “Killstagram,” the tongue-in-cheek site to which players can upload their edited real-time replays of each level, to see how carefully the developers have considered the fetishism of shooters.

It’s ironic that the story focuses so much on the idea of control, for beyond a few moments of intentional interference during the campaign, the gameplay lives and dies based on the fact that players have absolute control. The central 25 levels of the campaign are tightly designed around unique environments (a bar’s ample shelves of throwable bottles and billiard balls, an alleyway’s oncoming traffic) and movie-like scenarios (dispatching three gunmen within an elevator). Completing these scenarios requires a stuntman’s knack for reacting to cues with perfect timing, and the overwhelming odds ensure that players have no margin for wasted moves. However, all that glorious control is wasted on Superhot’s Endless Mode. Without the precise challenges of those compact levels, the game is just a repetitive gauntlet of randomly spawning foes that are either impossible to avoid or too easy to eliminate.

On the other hand, the price Superhot pays for the adrenaline rush of its levels is in how quickly the player can blaze through them. With the average real-time replay of a level at well under 30 seconds, the game is over just as it’s getting really good, no matter how incompetent the player might be at playing. A ton of optional post-game challenges reward speedy memorization and mastery of the campaign, as well as the creative use of specific weapons (like the katana), but once the story ends, these play more like stylish (and sometimes repetitive) demonstrations of the gimmick more than a fully fleshed out game. So far as the short and sweet Superhot goes, then, it’s true what they say: The brightest flames burn quickest.