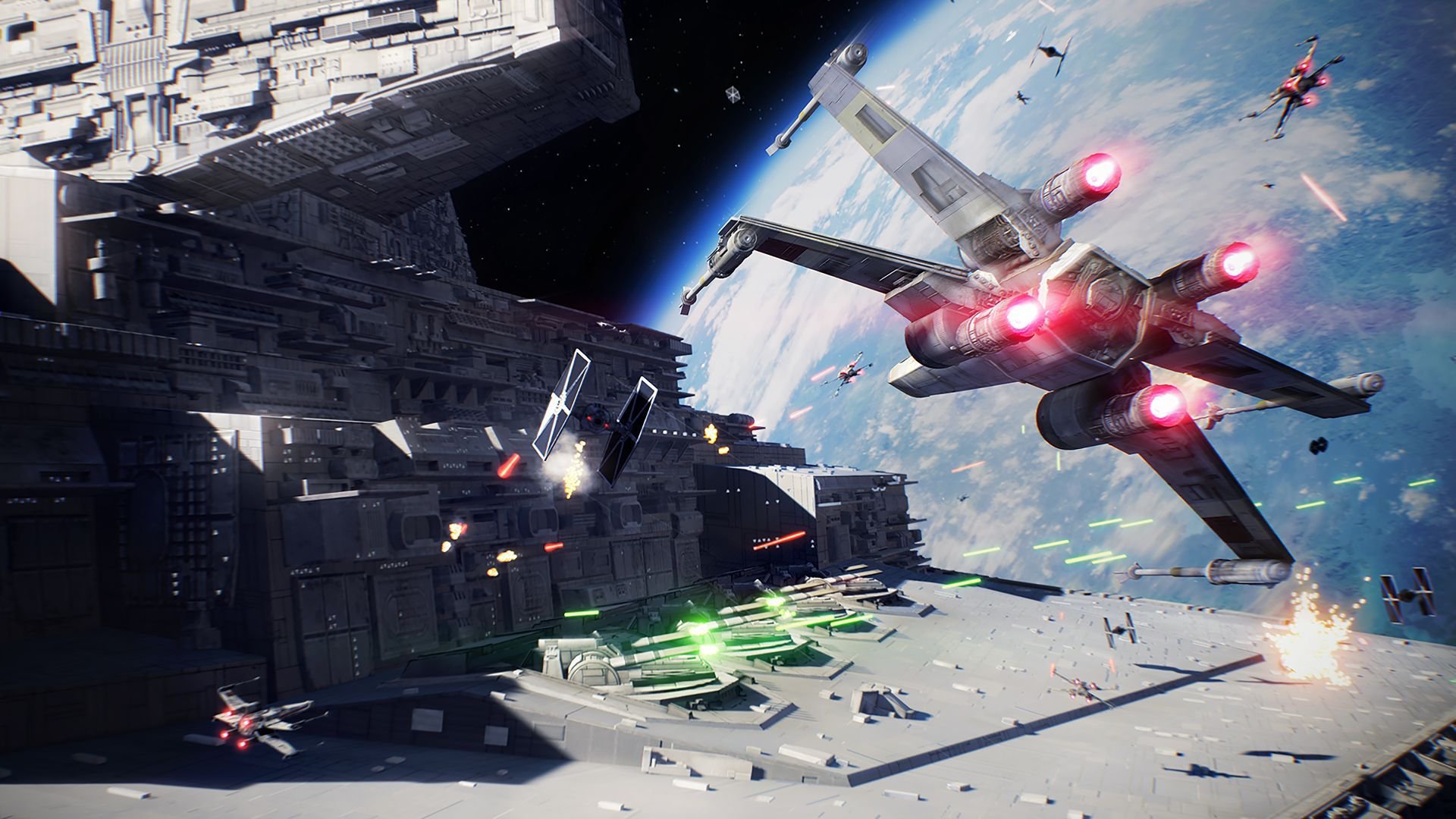 When LucasArts was firmly in charge of developing their own line of Star Wars video games, quality control was a complete crapshoot. Sometimes the developer released winners, sometimes losers, and sometimes fascinating experiments that at least tried to do something different. It’s worth noting that 2005’s Star Wars: Battlefront II managed to straddle all three categories depending on which mode you played. That was a game crazy enough to try marrying respectably cool massive-scale multiplayer shootouts with a single-player campaign centered around a reading of a stormtrooper’s terrifying Order 66 war journal. The 2017 game bearing the same title is its complete creative opposite: a soulless pachinko machine where narrative depth, cooperation between friends, and the exhilaration of gameplay have all taken a backseat to the gaping Sarlacc-like maw of unadulterated greed.

The big addition to this sequel is a single-player campaign, a baffling omission from 2015’s Star Wars Battlefront. The campaign follows the Inferno Squad, a sort of elite Navy SEAL team that the Empire calls in when it has dirtier deeds to do than usual, and puts players into the shoes of its leader, Iden Versio, daughter of a high-ranking general. Star Wars Battlefront II starts out near the tail end of the Return of the Jedi storyline, shortly before Death Star #2 is destroyed, taking much of the Empire with it, but not before Emperor Palpatine issues some grim, posthumous final orders. Much of the details of said order are never explicitly stated, but what’s made clear is that the Empire’s m.o. undergoes a fundamental change from hegemonic dominance to something resembling full-on genocide.

For a brief couple of missions, it seems like the game’s campaign might be heading into impressively heavy terrain, with Inferno forced to carry out absurd orders for leaders running off of an unknowable agenda, leading to a horrifying last straw of a mission on Iden’s home world. Then, as if someone sensed that the door opened for subtext and allegory and swooped in to close it, the narrative takes a fast swerve past exploring the ramifications of fascists discovering their latent humanity, and skips almost immediately to the Inferno Squad being the good guys, pitting them against their buddies in the Empire with very little in the way of explanation, narrative cohesion, or tension. Brief moments pop up that seem to suggest that maybe at some point there was more to this tale. What remains in the finished game, however, is a hollow, gutted shell of a story, perpetuated by undercooked, disconnected, linear run-and-gun missions, and pandering cameos, only one of which—a short but thoughtful parable with a lone Inferno member meeting Luke Skywalker—actually feels like something more than dribbling fan service. It’s a campaign that seems to begrudge its own existence, and the fact that it culminates in a cliffhanger for a soon-to-be-released DLC is insult on top of injury.

There’s an Arcade mode where single players can take the well-known Hero characters of the saga out for a test drive in sparsely populated one-off missions, but just like its predecessors, Battlefront II’s priorities lie predominantly with the online multiplayer modes. The actual gameplay itself isn’t any great shakes to begin with. Until you’ve earned enough points during a match to play as one of the couple dozen big-name heroes like Rey, Kylo Ren, Yoda, Darth Maul, or Han Solo, most of your time in multiplayer will be spent playing missions where you inhabit nondescript foot soldiers of the Rebellion/New Republic or the Empire/First Order, carrying out small-stakes objectives in enormous warzones set in all corners of the Star Wars galaxy.

There’s nothing terribly innovative to put Battlefront II on par with the best of the genre, which is an even worse place to be in a world where both Destiny 2 and Overwatch are both viable alternatives. That the game’s stages are as massive as they are means going relatively long stretches without running into an enemy. It also doesn’t help that Battlefront II actively discourages even the basic thrill of teaming up with friends; each time players respawn, they’re sorted into a random grouping of four people, with no option whatsoever to allow friends to stay as a group, even if they’re on the same team.

The aerial combat missions fare much better in the fun department, with some truly crazy high-speed X-Wing/TIE Fighter action, but there’s also less variety in the kind of missions you can carry out in that mode. Still, at least on a surface level, actually playing Battlefront II does feel, admirably, like Star Wars. The rather basic nature of the gameplay can change once players start earning various enhancements, allowing you to outfit the previously mentioned nondescript foot soldiers with better perks and technology, like faster healing, jetpacks, and flamethrowers. Like Star Wars Battlefront, you unlock these perks through Star Cards, each one of which has a single enhancement to slap onto your character, not unlike the loadouts in Call of Duty. You can use credits earned through normal gameplay to unlock loot boxes, but even in a great match where you’ve decimated your opponents, the rewards are paltry compared to how much it costs to unlock a single box, which itself might not contain anything useful for a character/soldier class you’d like to use. You can use Parts to construct a Star Card yourself, but, again, a typical Parts reward is a pittance compared to what it costs.

Alternately—and here’s where the Sarlacc pit opens—you can pay actual money to purchase Crystals which will not only unlock loot boxes instantly, but also offer some of the more rare rewards. Even acknowledging that the very existence of loot boxes is a hot-button topic, the biggest mistake a game could make with these loot boxes is tying them into a game’s balance of power, and it’s undeniable that Battlefront II is set up in a way where players who haven’t opened their wallets are at a crucial disadvantage in every match for hours on end. Even then, the game’s most desirable content—most notably, the ability to play as Darth Vader or Luke Skywalker—is kept behind a high enough wall to keep even financially flush players on the hook.

Battlefront II’s single-player experience feels like it was executed under duress. Gameplay feels passable but lacking in imagination. The game is notoriously stingy about letting you play with the people you want, and as the characters you most desire. But giving EA your credit card number has never been easier. In that sense, Battlefront II is actually a rather fitting sequel to its immediate predecessor, which was itself a fun, visually phenomenal but woefully shallow and convoluted experience. Everything that was right with the original game is exactly as it was before. Everything that wasn’t, however, has mutated into something more craven and significantly uglier.

Note from the Author: As of November 17, EA and DICE have suspended the Crystal currency system from Star Wars Battlefront II, thus removing the option for players to spend real-world money on upgrades. This is a positive, commendable step, showing initiative on the part of the game’s publisher and developer to address players’ major concerns regarding what’s increasingly proven itself to be a predatory practice in the current gaming landscape. However, even without the ability to spend money on upgrades, player progression remains a painfully arduous process throughout the game. Also, the language used in EA and DICE’s press release seems to indicate that in-game purchases will be returning at a later date, which doesn’t inspire faith that the issues inherent in the progression system will be fully addressed by the kinds of sweeping changes that would negate the criticisms laid out above. As such, while we praise the efforts on this issue, our review score will not be changing, and for posterity’s sake, given the ramifications that the increasing loot-box trend may have on this medium, nor will the text.