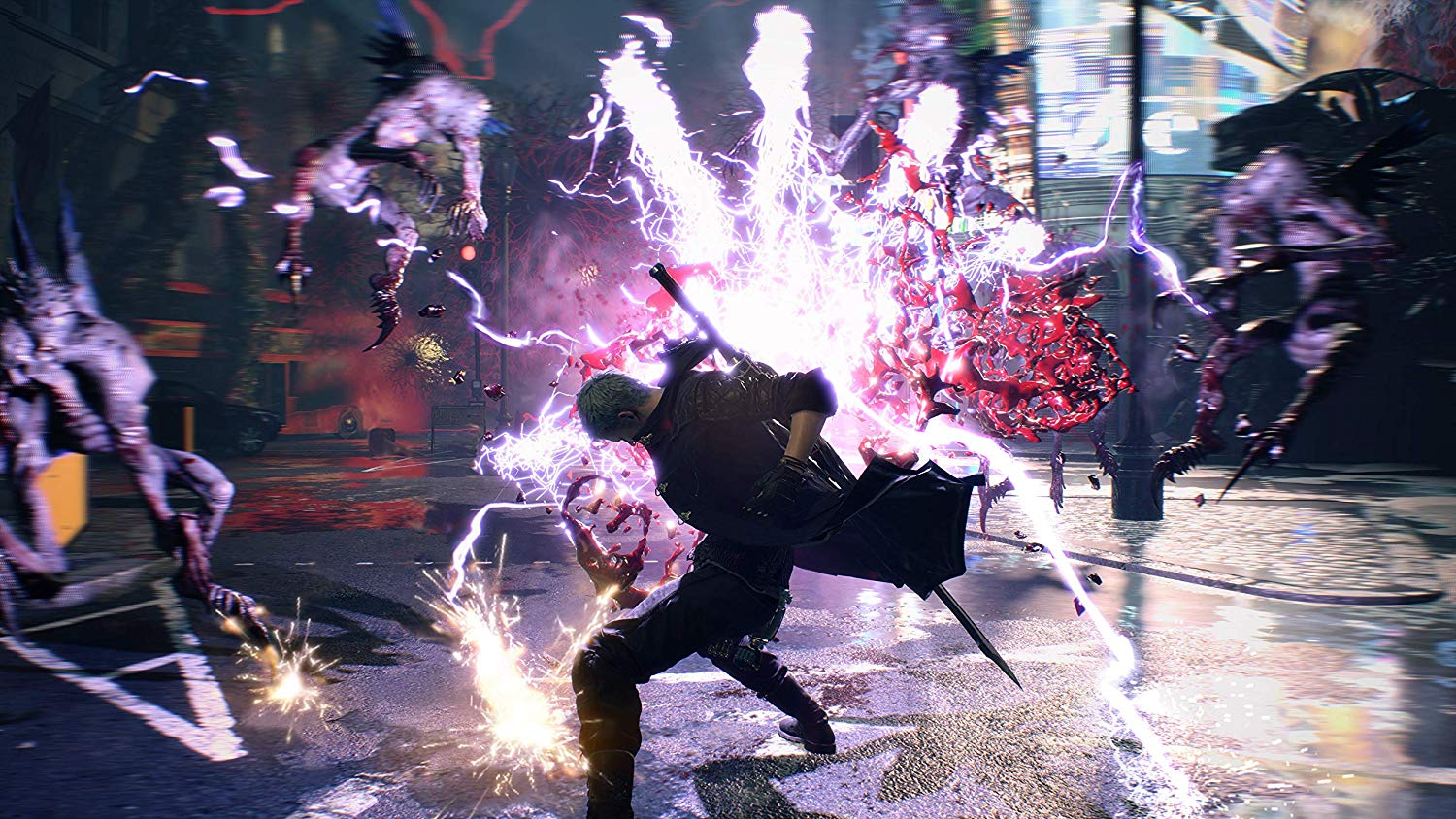 Not only a return to form for the Devil May Cry series after the lethargic Devil May Cry 4, Devil May Cry 5 is also something of a restatement of intent for the original numbered series after the woefully underrated DmC: Devil May Cry’s detour into more grungy terrain. Devil May Cry is now back to the old-time rock n’ roll for Dante, reverting to much of the trashy anime swagger of the first four games, emphasizing style over anything resembling substance. And yet, there’s still a touch of the reboot’s madness floating around in here, which keeps the game from falling back on some of Devil May Cry’s worst habits, while also advancing the series’s past ideas with great zeal and imagination.

As one might expect, considering that Devil May Cry 4 was released 11 years ago, Devil May Cry 5 represents an enormous jump in visual complexity for this series. Beyond the incredible fine detail in every humanoid character’s face and performance, the landscape marries realistically rendered European cities with a stomach-turning sebaceous mess, borne from a demonic tree that leaves a sort of hellish insectoid apocalypse in its wake. In terms of actual game design, there’s nothing terribly audacious going on here, with sometimes too-tight linear corridors leading to wide-open kill zones. But the this isn’t a game about what you plan to do about a problem, but how ridiculously elaborate and flashy you can do that thing, and the game is a near-endless buffet of innovative options for turning enemies into mincemeat.

Every move that’s ever been a part of Dante and Nero’s repertoires in the past is an option here. Nero is all about hard single strikes, and figuring out ways to maximize them each and every time. He’s aided by the Devil Breaker system, which builds on Devil May Cry 4’s main gimmick. In that game, Nero could grab or slam anything from long distances with his demonic arm. In Devil May Cry 5, after the arch-demon Urizen rips off that arm, Nero now has a set of disposable cybernetic replacements that can do anything from blasting nearby enemies with lightning, to being able to temporarily stop time. The upshot is that the arms are fragile, and will break if you get hit while using their special functions. It’s a careful balance that teaches players to respect the immeasurable power at their fingertips.

Dante, on the other hand, is all about the right tool for the right job, and the four styles returning from Devil May Cry 3 and 4—Trickster, Gunslinger, Swordmaster, and Royalguard—combine with an expansive, devastating arsenal that changes function whenever those styles change is legitimately daunting at first. Experimentation is welcomed more in this game than the others, especially thanks to a new long-overdue practice space called The Void. However, it doesn’t take long to find a set of moves you’re comfortable with, and once you’re ready, there’s a formidable list of skills to unlock in order to take your repertoire to the next level.

The wildcard here, however, is the addition of a new character, V, a demon conjurer who fascinatingly resembles a frail, underfed, Uncanny Valley version of Adam Driver. He doesn’t fight himself, but instead summons three demonic familiars—a panther, a wise-cracking talking raven, and a massive golem—to do his fighting for him. The slower, more deliberate gameplay in his levels is a strangely captivating contrast with the typical Devil May Cry style, if not entirely successful since you’re issuing commands second-hand.

V’s mechanics feel like they were built for a JRPG that never happened, rather than for a series built for speed. Yet it’s such a unique moveset for this type of game that it’s hard not to admire Capcom’s bravery for even trying it here. More than the developer’s typical method of ratcheting up the difficulty in the series’s traditional Dante Must Die mode, V’s stages require players to truly study their prey, to think 10 seconds ahead at all time in order to avoid V getting hit before the familiars can take out the closest enemy. Playing as V requires considering the opening created by every move instead of wailing away at a ragdolled demon. These levels truly force the player to consider and respect their enemies, something none of the previous games can really allow given that they’re all about making Dante and Nero look unstoppable in combat. V never does, and it’s an intriguing breath of fresh air.

Devil May Cry 5 executes this rowdy stage-destroying romp with all the glee that was missing in the fourth installment, making the real difference between the main series and DmC abundantly clear. Most players would like to pretend that Devil May Cry is all about being stylish and cool, but the truth is a bit more complex. Because, as far as what’s legitimately popular and edgy in the 2010s, DmC had its thumb right on the zeitgeist, with its EDM-kid Dante, its beautiful graffiti-infused aesthetic, tipping its nose rather unsubtly at the loneliness and teenage abuse that create alt subcultures in general. Arguably, Devil May Cry 5 is more successful as a traditional Devil May Cry game for not trying to follow the zeitgeist and instead existing permanently in the one it created back in 2001—one that revels in recent-past hallmarks of cool like Scrooge McDuck taking a bath in a bin full of ‘90s arcade tokens.

On the surface, Devil May Cry’s aesthetic appeal conforms to a sort of goth-Eurotrash John Wick chic: wearing a trench coat, doing death-defying acrobatics wielding dual pistols in ways that would make John Woo proud. This is the window dressing for what is—and, in retrospect, always has been—a collection of mechanics, character beats, and elaborate flourishes that thrives on self-awareness and arch camp more than the series’s severe and grim premise lets on. DmC leaned into that severity and grimness with great seriousness, whereas Devil May Cry 5 gave us a climax involving a character becoming a divine creature of retribution by literally giving a middle finger to heaven itself. It’s enough to wonder why nuance and social relevance would ever want to become part of this series’s narrative vocabulary?

If anything, Devil May Cry 5’s success stems from embracing that camp with greater vigor than the series ever has before, if not as wholeheartedly as its estranged cousins, Bayonetta and Bayonetta 2. However, there’s no greater embodiment of Devil May Cry’s entire ethos as a series than Devil May Cry 5’s newest and absolute best character: Nico, a chain-smoking, biracial cowboy hipster gun nut engineer-slash-arms dealer who’s into lo-fi hip-hop, built her workshop into the back of her van, and cartoonishly drives into any situation to sell our heroes weaponry like a deranged version of the Kool-Aid Man.

An entire review could almost focus on Nico as the perfect encapsulation of the game as a whole, but the one scene that says it all is right at the start: After arriving on the scene by mowing down an entire crowd of demon ants with her van, Nico steps out to face one of the survivors, a cop who’s still dumbstruck that the demon apocalypse is even happening and his friends and colleagues have just been burned or eaten alive in it. Nico, on the other hand, is the one fully human character who’s seen that angels and demons exist and that a bunch of goth pretty boys are the only ones capable of stopping them. She plops down next to the cop and tells him to sit back, chill out, and enjoy watching Nero whup ass. Which they—like anybody who sets eyes on Devil May Cry 5—can’t help but do.

This game was reviewed using a retail PS4 copy purchased by the reviewer.

Review: Hypnospace Outlaw Is a Lament for the Wild West of the Early Net

Review: Dead or Alive 6 Is a Soft-Core Fighter Stacked on More of the Same