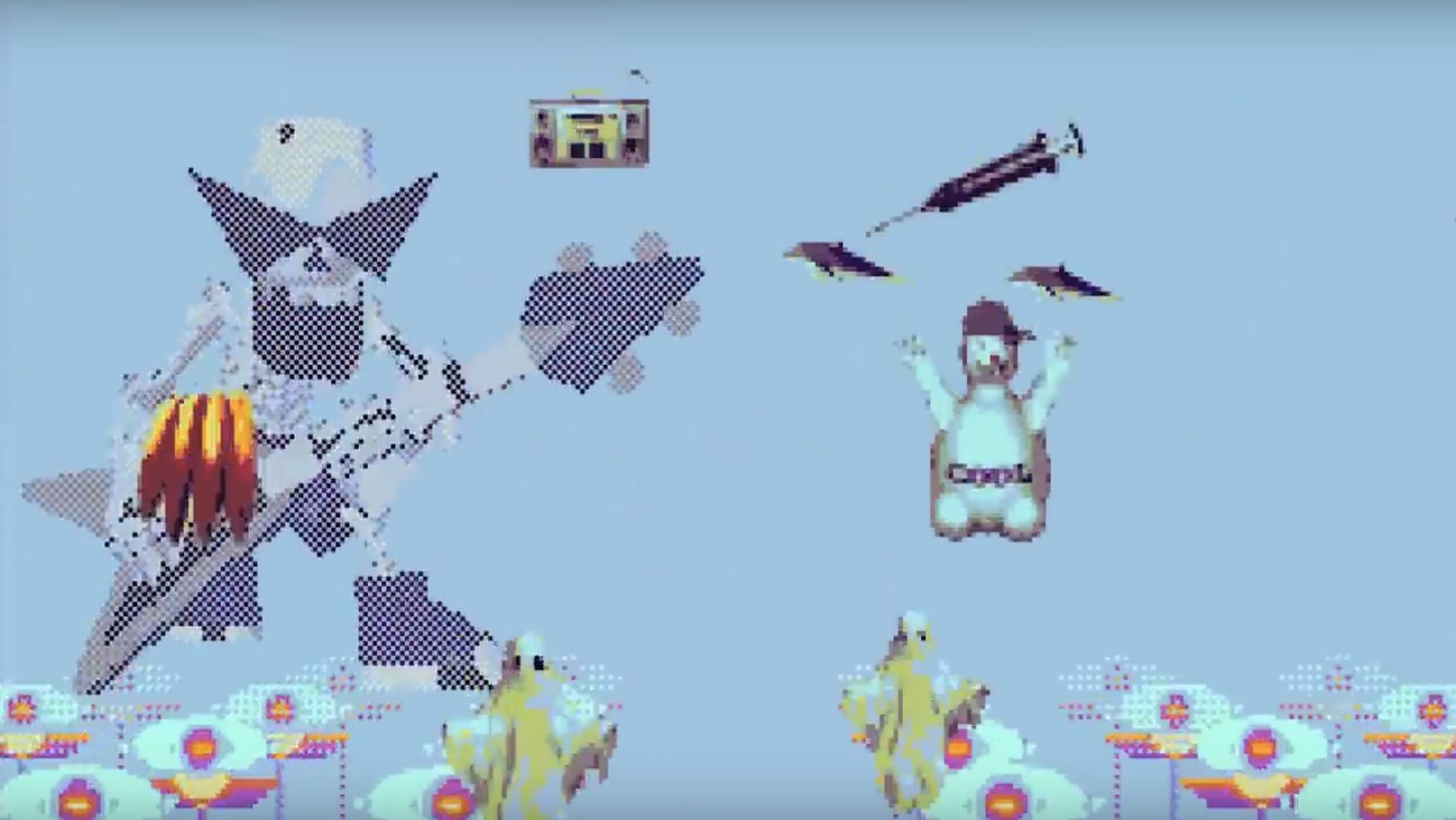 The technology at the center of Hypnospace Outlaw sounds futuristic: a headset that lets you access an online community while you sleep. But it’s also 1999, which means your brain-beaming helmet displays the limited color palette and grainy, pixelated artwork of an early internet, cursed with horrendous fonts that mingle with faintly terrifying 3D image renders and cursor trails. Nothing quite compares to the gaudy Wild West of the early internet, and Hypnospace Outlaw mines that eye-searing kitsch for pages upon pages of vivid, outrageous comedy as you dream-surf a privately owned net.

Throughout, you marvel at unfortunate interests like fan pages for rap-rock groups and chain letter-esque images that promise to ward off evil. You click through personal blogs and projects and advertisements grouped into zones according to shared subject matter. That’s the job, after all, since you play the game as an “enforcer,” a newly assigned moderator to the Hypnospace community. A purveyor of banal justice, you seek out unapproved commerce or strike down images and links with the divine hammer of copyright infringement.

In Hypnospace Outlaw, you’ll page through the teen zone and the conspiracy theory hub, but the game simulates more than just a web browser; an entirely customizable desktop runs the programs you find and opens downloaded documents. You can’t send email, but you’ll receive it. As you’re assigned more cases, the scope of the detective work begins to incorporate these other elements, requiring you to scan for references and redirects to pages tucked out of plain sight, accessible only through backdoor links, search keywords, or outside software that’s just as clunky to use as something from the early net era might have been.

The game could easily sustain itself on no more than this conceit, the base investigation and ironic appreciation of a World Wide Web still full of strategically deployed “under construction” banners. Instead, it uses those elements to build something both stranger and more ambitious, weaving a world of staggering consistency. Designers of HypnOS—the headset’s operating system—hang around their creation, and so do their commercial partners. You begin to pick out business strategies and creative decisions, to spot revealing nuances in page design, some as small as whether or not they redirect back to the home page.

The more zones you gain access to, the more familiar you grow with Hypnospace’s own terms and trends. Its users post images en masse to protest copyright removal, support underground music like “coolpunk,” or supposedly insulate themselves from “beefbrain.” Others make pages that recount the deepest cuts of a comic book bull’s history, link to spooky interactive fiction, discuss the nuances of “trennis,” and recount the erratic career trajectory of The Chowder Man, an aging rocker turned corporate sellout. Some of the autoplayed page jingles—all of them specifically, hilariously designed for the game—get stuck in your head regardless of how much they sound filtered through a tin can. Though Hypnospace Outlaw’s clear reference point is the early internet as we knew it, the game is more about exploring the developers’ own unique spin on the web pre-Y2K, which is so distinct that it never devolves into a round of spotting real-world references. Hypnospace, after all, is a world of its own.

To a point, the game is about pointing and laughing at the outdated presentation of user-created web pages, but it’s careful not to fall into easy parody. Hypnospace users are totally sincere about their creations, or totally sincere in their insincerity. They live in their present, and that present is one where every page hosts disastrous touches like an eyesore font or a 3D emoticon with a terrifying rictus grin. While you become accustomed to, and begin to appreciate, such idiosyncratic Hypnospace trappings while you moderate content, the web pages seem to build partial portraits of the people behind them: thoughtful writers, edgy teens, misanthropes, simpering wannabe cool kids, myopic control freaks, and people who feud through amateurish MS Paint-like art because they see too much of themselves in each other. Snippets of real life peek through every page’s design choice and written word.

You never directly converse with these people, but you come to know them by their work. They maintain their own projects and pages, displaying personas that are deeply personal because everything had to be built by hand. Hypnospace Outlaw functions as a kind of goofy lament for a personality that’s been diminished in the decades since, as social media corrals us into an infinitely more homogenous personal space. But the game never feels limited to its chosen era, as its depiction of obsessive personalities, crowd mentalities, and people who look for meaning by carving out a space online resonates all the way through to the present day.

For as much as the game pays tribute to the spirit of the early web, Hypnospace is certainly not a utopian vision. Even between the content you’re supposed to scrub, the place is absolutely ravaged by commerce and capitalism. Such a space must, of course, be monetized as much as possible. The desire to be recognized and heard by literally anything or anyone, to feel like more than voices that cry out into an online void from small towns where they don’t fit in, is exploited for corporate gain. Companies cash in on trends, marketing to children in their sleep. They pay people like you, volunteer enforcers of dubious corporate norms, in currency that can only be spent in Hypnospace. The company town has gone digital.

None of this stops Hypnospace Outlaw from being hilarious (one child’s drawing is too poor to qualify as copyright infringement), but it situates the game on the thread that connects comedy with tragedy, and endearing eccentricity with outright toxicity. The pain seems funny until you recognize that it’s real, learn that there are people behind those screens. The game is a monumental achievement, not just for its detailed rendering of another place and time but for the observed humanity of its writing and the things it has to say about the intersection of capitalism and art. Hypnospace Outlaw’s surprising thematic sweep transforms an already wondrous internet simulator into a striking commentary on the development of movements and communities even in the intervening decades, using this microcosm of the internet circa 1999 to examine the way society functions when it’s extremely online.

This game was reviewed using a download code provided by No More Robots.

Tom Clancy’s The Division 2 Review: A Blast with a Major Split Personality

Review: With Devil May Cry 5, a Series Is Back to the Old-Time Rock n’ Roll