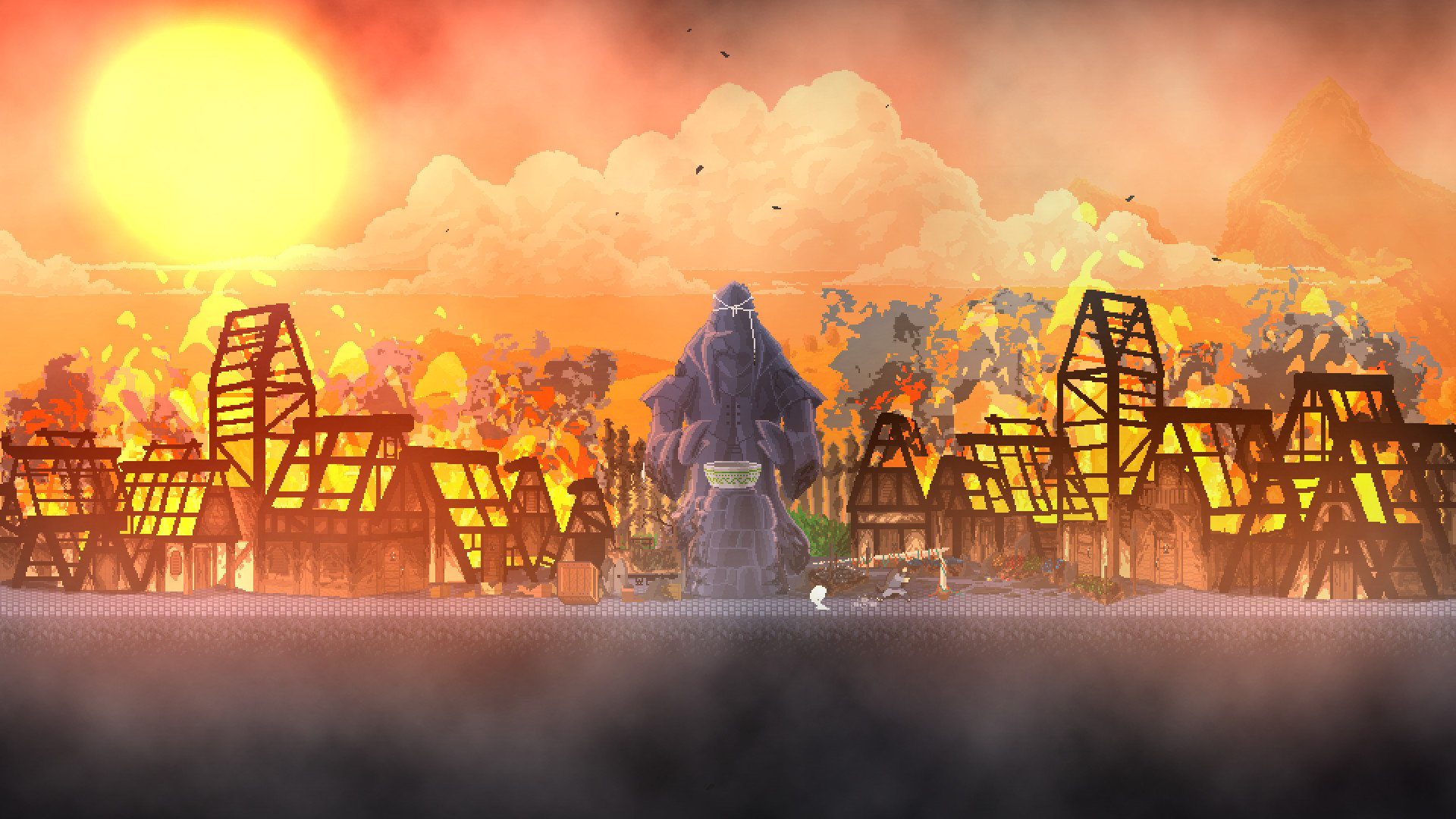 Everything burns so easily in Wildfire, from grass to vines to wooden gates meant to impede your progress toward a level’s exit. The player character, an accused witch from a remote village razed by the forces of the Arch Duchess, can control the elements, though only up to a point. You can pluck the flames right out of a campfire or torch and throw them at will, but what happens after that can be quite hectic and out of your control; for one, embers may leap from one surface to another, literally burning up your hiding spots and traversal options while spooking nearby guards. In their thoughtless panic, terrified guards will ignore you entirely, abandoning their posts and sometimes even deciding to take their chances by jumping off a ledge. Anything but the encroaching flames.

Such riveting chaos is the crux of Sneaky Bastard’s stealth game, upending the mannered layouts of its brief, two-dimensional levels. The zoomed-out view of each level gives off a faint sense of omniscience, letting you freely scroll to see the careful patrols and designated hiding spots. But rather than allowing the player to grow comfortable and complacent by honing the same approach over time, Wildfire constantly introduces new mechanics as the forest gives way to dark caves and snowy mountaintops. Sometimes you get new powers entirely, such as being able to use plants to generate climbable vines or bushes to hide in. Water can generate an ice column, freeze enemies, or form a large bubble to carry you upward.

Other mechanics mingle with the game’s various systems, like the many ways an object can catch fire or the traversal mechanics that find you creeping below bridges or hanging off ledges to stay out of sight. Deposits of sulfur crystals explode at the slightest flame, leaving behind a pillar of smoke to obscure your passage or suffocate enemies into unconsciousness. Freezing an enemy will also deprive them of oxygen long enough to knock them out upon thawing, as long as they’re not already carrying a lantern to prematurely melt their icy prison. The emergent results play like a 2D take on systems-heavy games like Thief and Dishonored.

But some of the game does risk being a little too open-ended, since each level contains additional goals like an optional objective (burn all the vegetation, infiltrate via the roof), rewards for going undetected or not killing anyone, and sometimes captive villagers to rescue. It’s often not possible to complete every such task in a single playthrough, so you may freely return to prior levels at any point, even with powers acquired later in the game. But as a result, many of these tasks feel trivial, such as there being little reason to rescue all the villagers again when you’ve already gotten the reward. Indeed, in one level where they’re tied to some explosives, you don’t technically have to rescue them at all.

The game’s constant flow of new ideas doesn’t always pan out either, as the complexity of a few later levels can veer into outright tedium. Still, Wildfire mostly maintains a thrilling unpredictability for the way it’s permeated by accidents both happy and otherwise, like the flaming guard who flees into a sulfur deposit or the wooden bridge that breaks beneath your falling momentum. It fulfills that all-important requirement of a great stealth game: that there’s considerable joy to experimenting with new approaches and poking at the edges of its ingenious interlocking systems to see what happens.

This game was reviewed using a press key provided by Humble Bundle.

Review: If Found… Is a Poignant Grappling with the Act of Erasure

Review: Maneater Is a Campy Action RPG Sunk by Repetition