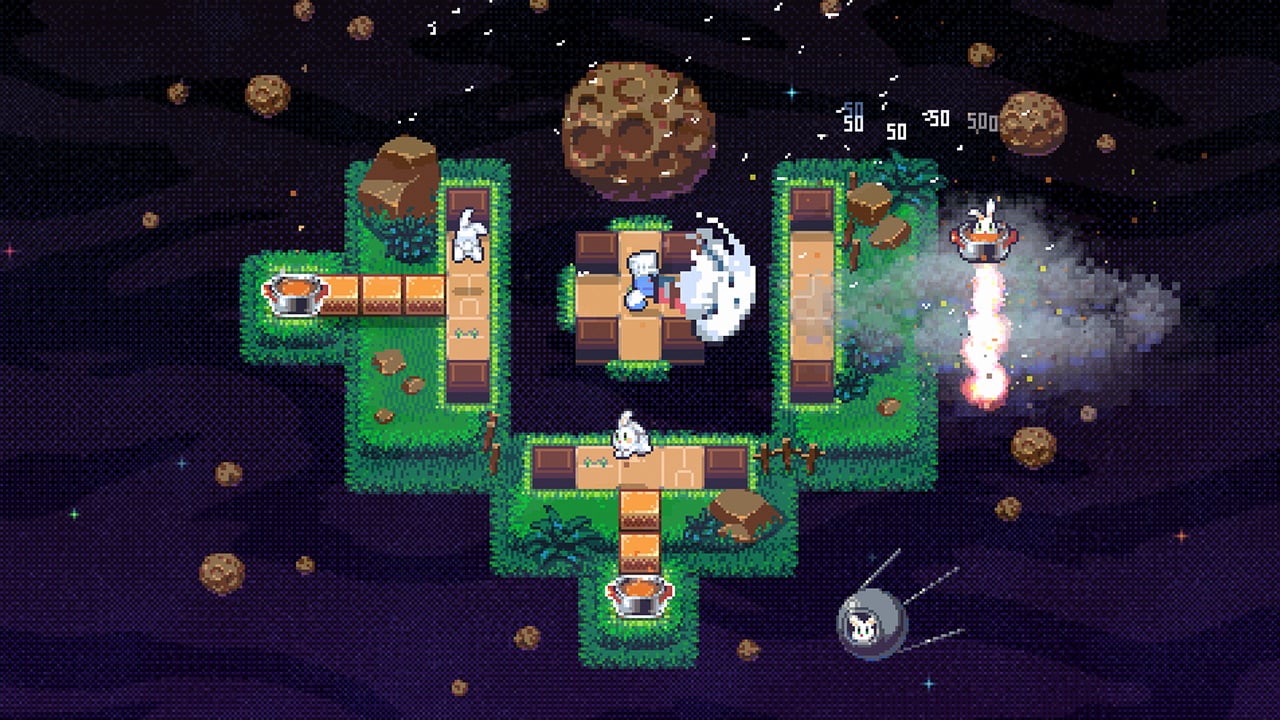 Swedish-based developer Pugstorm’s Rädical Rabbit Stew doesn’t reinvent the wheel, but that doesn’t prevent this madcap arcade puzzler from being entertaining. Its nonsensical plot, involving a hungry and jealous Rabbit Queen abducting a bunch of intergalactic space rabbit chefs, frees up the gameplay to be equally ridiculous. And considering that the game already begins with the volume of its antics turned up to a 10, with your cleaning-boy protagonist figuring out the right angles at which to whack ravenous rabbits into cookpots, it’s impressive how much louder things get. Throughout, you’ll encounter bomb-filled pirate ships, slippery ice arenas, a dark cemetery haunted by ghostly bunnies, and a variety of tricked-out, gameplay-altering spoons for your hero to wield.

Rädical Rabbit Stew takes a lot of cues from games like Bugs Bunny Crazy Castle and Goof Troop, whose devious puzzles are covered by a veneer of comedy. The foundational gameplay is solid, with much weight placed on the jokes found across 60-plus levels—and they largely hold up. The first boss fight, for instance, is against a giant dog wearing an ill-fitting bunny costume. His name is Pugs Bunny, and you must defeat him by knocking his vegetable-laden model trains at him as they steam past. Familiar elements like pressure plates, moveable blocks, and slippery ice are all executed well, and the spoon-slapping mechanics occasionally offer novel ways to interact with such mainstays of puzzle games, but if wanton punnery isn’t your thing (Planky McBoatface, Lava Bunthedral, and Bunningham Castle are some of the level names), the game is bound to wear a bit thin. The general lack of difficulty might be a factor in that: While there are 69 (groan) optional medals, collecting them usually just requires that you notice a path hidden just out of camera range, not in solving any more challenging puzzles.

It’s a little disappointing, then, that the developers at Pugstorm didn’t dig a little deeper; metaphorically speaking, they’ve left more than half the carrot buried in the soil. One level introduces a super carrot that, when knocked into the same row or column as a bunny, causes enemies to crazily charge directly toward it, smashing through any obstacles in its path. This mechanic is never encountered again, not even in Rädical Rabbit Stew’s modest level editor. It’s sad enough that the cannon-like cauldrons that shoot you across gaps and the armored, knife-wielding bunny knights that pursue you are underutilized in the campaign, but it’s downright frustrating that you can’t use them in the level editor. The game’s local multiplayer is also similarly underwhelming, as there are only four timed stages, each of which revolves around vying with up to three friends to pot the most bunnies.

Considering that Rädical Rabbit Stew can be beaten in under an hour (though a first run will take at least three), it speaks to the quality of the level design that the gameplay doesn’t feel rushed. If anything, it’s stuffed with a wide variety of ingredients. A lot of care has gone into distinguishing enemy classes, like the unstoppable bombardier bunnies clad in aviation caps and goggles or bat-like bunnies that swoop toward you, as well as arming you with unique weaponry, which includes a grappling-hook spoon called the Helping Hand and an explosives-making one known as the Bomb Scoop. These creations are each well-defined and enjoyable, which makes it all the more frustrating that you aren’t given more time to play with them. As a result, Rädical Rabbit Stew sometimes feels like more of an appetizer than a main course.

This game was reviewed using a press key provided by Wonacott Communications, LLC.