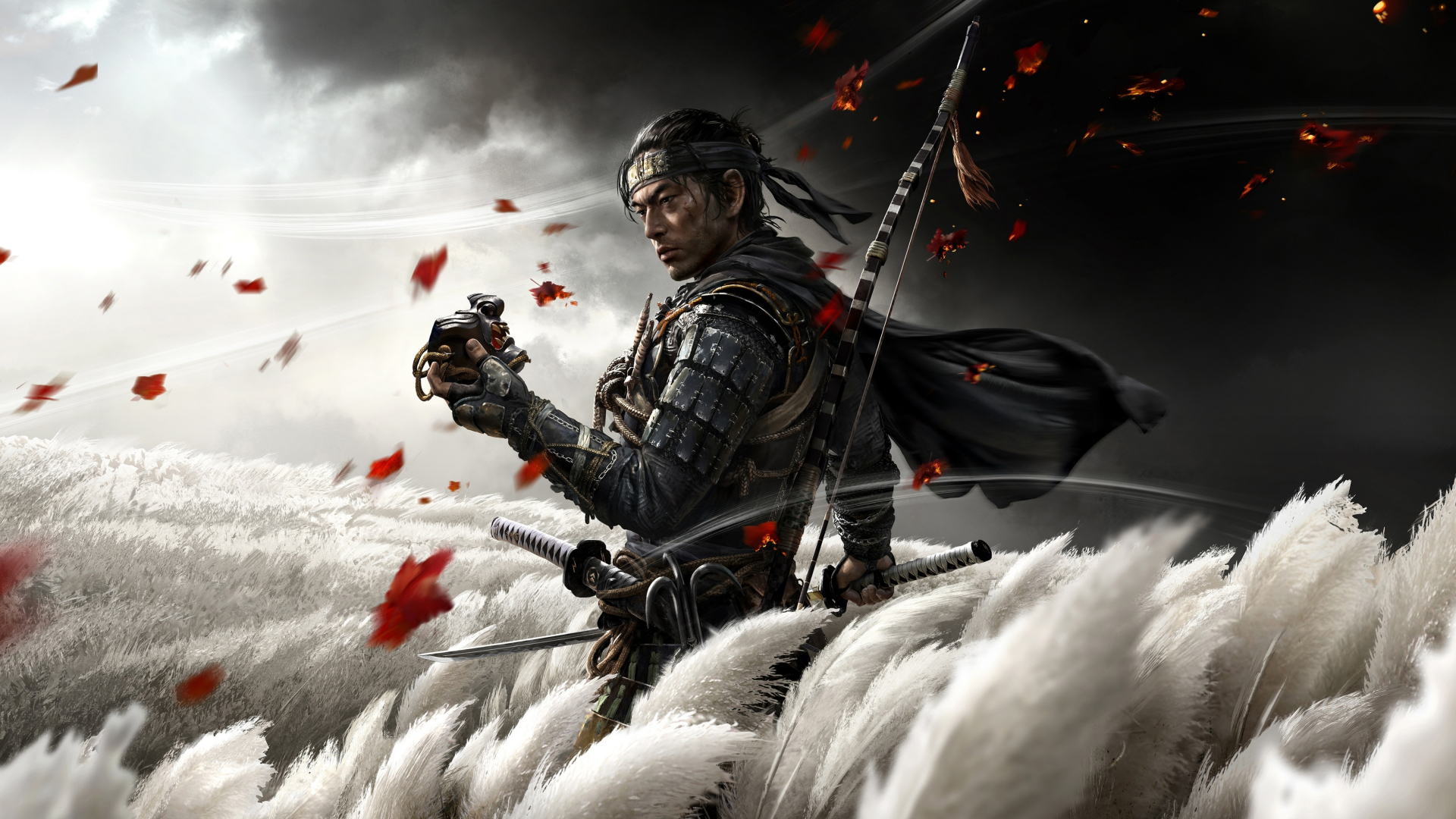 Despite the game being about as far as you can get from a story set in 13th-century Japan, there’s a quote from Mass Effect 3 that kept echoing in my head throughout the 40-plus hours it took me to complete Ghost of Tsushima: “Stand amongst the ashes of a trillion dead souls, and ask the ghosts if honor matters.” It’s a wonderfully poetic line of dialogue, from a game that’s every bit as concerned with how people fight a righteous war, and how much tradition and legacy and optics play a role in that.

Poetry can be wrung from human attempts to justify horrific but necessary actions—it’s just that, aside from the occasional line of dialogue like the aforementioned one, video games as a medium are often lunkheaded when it comes to deploying poetry. Bless Ghost of Tsushima, then, for trying to do so. Sucker Punch’s latest has a rich, painterly beauty that places a premium on silence, and on the way its systems treat swordplay, creating environmental systems that bring awe to even the most mundane scenes. And the game very much explores the relevance of honor in a world that requires the wetwork of bastards. Quite often, Ghost of Tsushima suggests poetry in motion, but it’s still playing in a space that relies too much on imprudence for mass appeal.

That foolishness was baked into Ghost of Tsushima right from the conceptual stage, as this is a game about Japanese culture and traditions that doesn’t have a single Japanese person credited as a writer or creative director. It’s a problem somewhat mitigated by how many Asian creatives were still involved in its making, but this is still a game that caters to players who’ve maybe seen Akira Kurosawa’s Seven Samurai and aren’t likely to do a double take while their character composes (largely meaningless) haikus some 400 years before Matsuo Bashō was even born, or being told that a particularly murderous Japanese woman had to teach the Mongols, of all people, how to properly use a bow and arrow. Nonetheless, if you’re willing to extend the good-faith exception to Ghost of Tsushima and judge it not for its historical accuracy, but for its true aim of delivering a lurid, pulpy tale of samurai vengeance set in one of the most strikingly beautiful open worlds ever crafted for a video game, you will find that it’s a ringing, if pointedly unambitious, success.

The game is set in 1274, as the Mongols, during their first invasion of Japan, raid their way across the tiny island of Tsushima. Our hero, Jin Sakai, and his uncle, Lord Shimura, are the first to try their hands against the invaders, but led by Khotun Khan, a soft-spoken but hulking, brutal warlord, the Mongols lay waste to the island’s best samurai—save for Lord Shimura, who’s held hostage, and Jin, who’s left for dead on a beach until a thief named Yuna nurses him back to health. Determined to get his uncle back by any means necessary, Jin adopts a few tactics frowned upon by proper samurai warriors, and makes a name for himself across the countryside as the Ghost, defending the weak and striking fear into the hearts of his enemies. 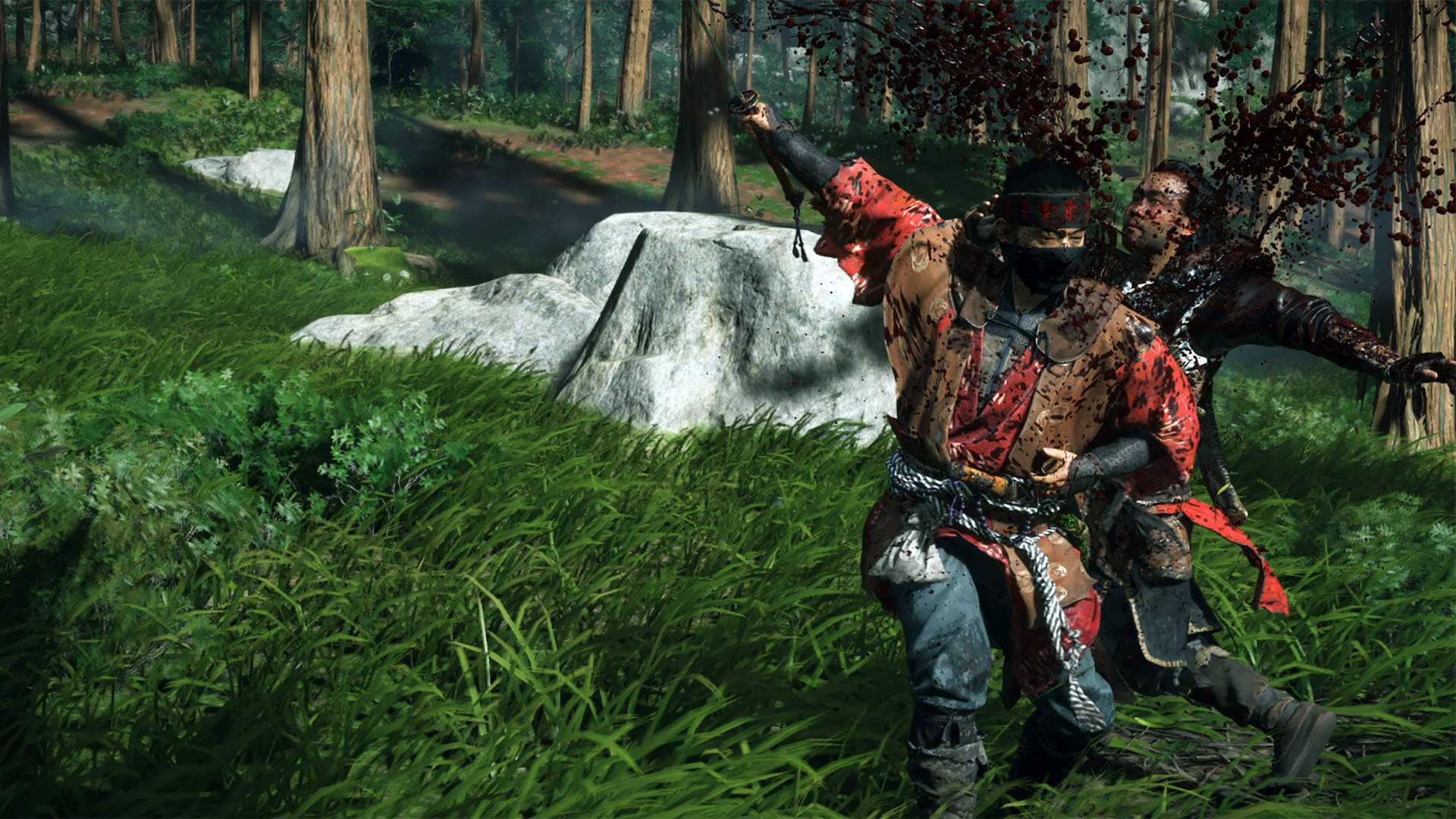 A scene from Ghost of Tsushima. © Sony Interactive Entertainment

You could be forgiven for thinking that sounds more like the stuff of Batman than of the code of Bushido, but it’s difficult to deny that that game makes it feel really good to play as a samurai caped crusader. It’s gratifying to wander beautiful watercolor valleys and approach marauders with steel in the eyes and hands, taking them down with extreme prejudice. And, in general, the combat is exquisitely simple, for basically forcing players to match their sword style with that of their enemies at the push of a button, and for the way the game’s forgiving parry system leads you to harshly punish enemy mistakes. Ghost of Tsushima’s most thoughtful and well-executed element is its Standoff mechanic, where pressing a button within a certain distance invites a group of enemies to send their best warrior for a face-to-face quickdraw, which is quite literally predicated on the visceral release of tension, of letting go of the attack button and opening an enemy’s neck.

The game largely follows the open-world action-adventure playbook to the letter, with all the map exploration, base-clearing, and collectible hunting that implies. On its face, that’s disappointing, especially given that Sekiro: Shadows Die Twice was more ambitious on that front. But that’s also a game that breathlessly hinges on survival and has no interest in giving you power and exhilaration. Sekiro is out to kill you, whereas Ghost of Tsushima is literally and figuratively guiding players to follow where the breeze takes them.

Across this game, Jin takes up the sword not just for the scattered resistance fighters attempting to force the invaders off their land, but in the name of farmers in search of their dead families, warriors looking to avenge their fallen comrades, dying family members looking to clear the enemy out of their ancestral cemeteries, and just straight-up bloody revenge against a horde of bandits. Alluring little side stories dot your path to the next major objective, and as you’re constrained by the limits of having to travel such long distances by horseback, the game gives you plenty of opportunity to get lost—all the better to let its beautiful and tranquil approach to storytelling wash over you. The basic bones of Ghost of Tsushima are open-world tropes, but they hold up thrilling little dimestore tales that could have been pulled from a collection of Lone Wolf and Cub manga, and those tropes are executed with a deliberate elegance that’s rare in the big-budget game space.

It’s frustrating, then, how often the game pulls the reins back on our joy, to remind us that we’re somehow playing the role of a samurai wrong. As much as dissonant ludonarrative guilt usually grinds up against the sheer glee of stabbing an enemy in the back here, it’s especially unfortunate when one of the lovingly rendered assassinations triggers a cutscene with Lord Shimura reminding Jin how he promised never to do that same exact thing. But for what it’s worth, the best elements of the story also seem self-aware of such hypocrisy.

For one, the first samurai you ever see on screen attempts to face Khotun Khan face to face, with honor, and the warlord retorts by setting the man on fire. Later, when Jin finds himself playing dirty against Khan’s forces, resulting in an aftermath that would be horrifically grisly if it wasn’t against proven monsters, Jin proudly states that he did what had to be done to crush the enemy. Throughout, you probably won’t regret anything, and the story will, by and large, take your side over strict samurai doctrine. It’s made abundantly clear that this is a fight that requires monsters, and aside from two very story-specific missions, you’re allowed to confront the enemy in whatever way you see fit, with no long-lasting effects on the game world itself. 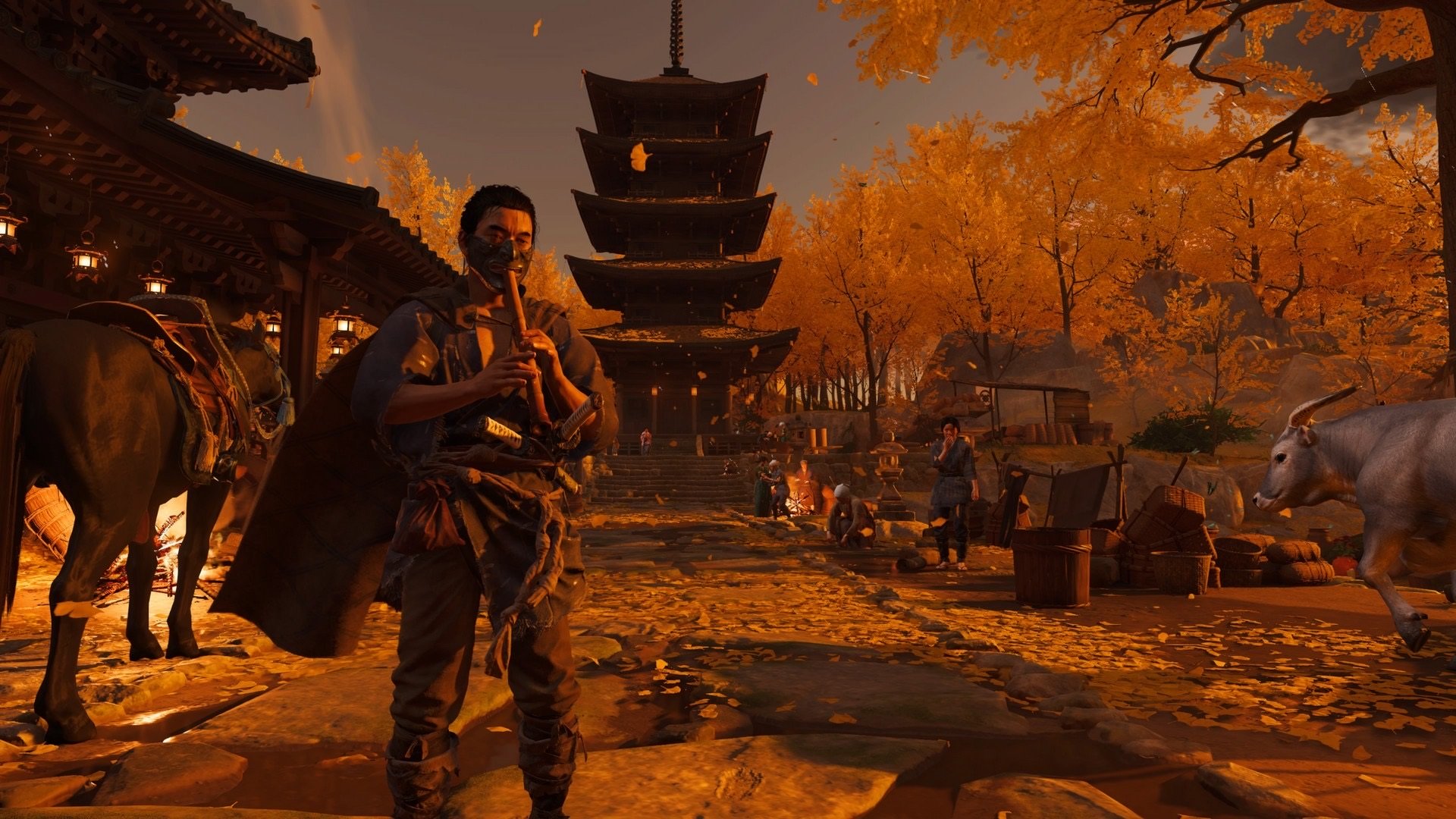 A scene from Ghost of Tsushima. © Sony Interactive Entertainment

Then again, why even attempt to instill guilt on the player at all if there’s no imperative to change the way you play the game? Even The Last of Us Part II has the sense to use the player’s own bloodlust against them, as a means of underlining how emotionally tiring and spiritually numbing it is. The guilt over becoming the Ghost, and all the grotesquery that implies, is the crux of Ghost of Tsushima’s story, but it’s a non-issue until the game sporadically decides it is one, admonishing us for using stealthy, ninja-like tactics but giving no impetus to want to stop doing so. It’s not until the emotionally complex epilogue that regret means anything for more than a few scant minutes at a time, and plopping the need for regret in the middle of the game’s most magnificent and cathartic moments of savagery comes across half-hearted at best.

That’s a byproduct of Ghost of Tsushima not pushing the envelope far enough away from its open-world ancestors. The things that would rush the game toward maturity—a firmer handle on history, a more in-depth exploration of the deeply stratified and elitist samurai caste system, or making Jin’s defiance of his uncle’s teachings a more proactive thing in the player’s hands—are largely left underdeveloped. Instead, like many big-budget prestige games, this one settles for “that primally satisfying violence you’re doing is bad.”

That Mass Effect 3 quote is a good summation of Ghost of Tsushima, but there’s a much more poetic one enabled right from the options menu: a visual filter called Kurosawa mode that renders the whole game in grainy black and white. You can even turn on the Japanese language track for an extra hint of verisimilitude, and some particularly strong performances from the voice cast. But no matter how excellent those performances are, or how much the visuals suggest deleted scenes from Rashomon, it’s hard to ignore that the characters’ lips are in sync with the English dub, and that the subtitles fail to convey what the Japanese actors are saying. Which is to say, Ghost of Tsushima has the look of a thoughtful samurai epic, but the façade flakes under scrutiny, revealing that it serves Western blockbuster tastes and tenets above all. It’s a game that so desperately wants to be 13 Assassins but more times than not ends up looking like The Last Samurai.

Sony Interactive Entertainment did not respond to our request for review code. This game was reviewed using a retail copy purchased by the reviewer.

Review: Paper Mario: The Origami King Is a Cut (and Fold) Above Other Comic RPGs