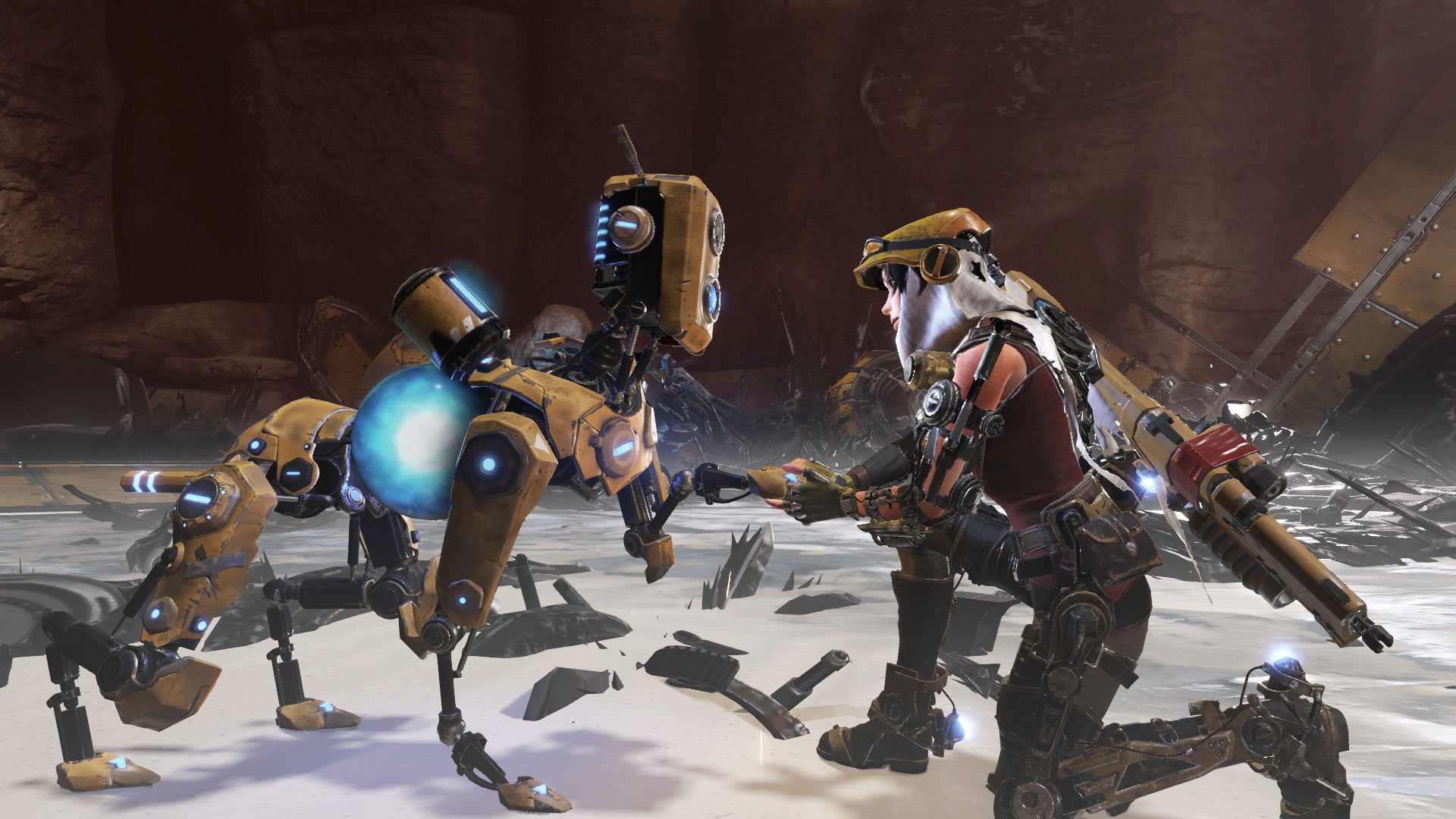 The main premise of Comcept’s new game, ReCore, is that its protagonist, a terraforming specialist named Joule, is stranded on the desert planet of Far Eden as part of a recolonization effort to escape a now-biohazardous Earth. Humanity should have arrived shortly after she landed to start the good work, but they didn’t. Instead, the robots that megacorporation Mandate sent to Far Eden to start building better worlds have gone rogue, leaving structures half-built and falling apart. Joule is now forced to try and scavenge the planet and any rogue bots she can blow to pieces for the technology to establish contact with the rest of her species, her father in particular.

It’s worth mentioning that all of this is information either relegated to the game’s menu system or told via audio logs scattered around the planet. ReCore takes a bold step of simply dropping players in the middle of one of Joule’s scavenge missions in the desert, with a robot dog companion named Mack, hunting for power cores. For a good hour, nothing gets in the way of Joules’s quest. The game invites rather strong, pleasing comparisons to the first dialogue-free minutes from Star Wars: The Force Awakens wherein we meet the film’s female protagonist. There’s very little besides wonder and curiosity guiding your actions through the desert wastes, and the exposition comes in scant fragments until you’ve completed the first dungeon.

It’s during this stretch that players get accustomed to the gameplay that will carry them through ReCore’s eight-to-12-hour campaign: Joule will typically come across a group of rogue bots and alternate between firing the four types of color-coded ammo she carries and sending her loyal A.I.—besides Mack, she can also befriend a robot spider and ape—to take a vicious swipe at her target. If the bot is big enough, she can fire a tether that can rip out its power core, which can be turned into materials to upgrade her companions, but otherwise, the gameplay isn’t far removed from action-game conventions of running, dashing, double jumping, and more from 20 years ago. That simplicity is refreshing compared to most modern games of this ilk, and if anything, it’s a sign of the game’s pedigree as the brainchild of a man, Keiji Inafune, who’s overseen the Mega Man series since its inception.

As ReCore trods on, it adds a few nifty but awkwardly utilized new traversal tools to spice things up, but for the most part, everything you saw in the first delightful hours begins to wear out its welcome once stronger enemies are able to kill Joule in two or three hits. It’s not just that the hits are cheap, often trapping Joule in corners and leaving you with no way to escape before it’s “game over.” If there’s any one common factor to all the little annoyances that hinder this game, it’s the load times. It’s one thing for a modern open-world game to have a two-minute-plus load time because it has to load up an area the size of Rhode Island; it’s another to have a two-minute-plus minute load time upon every death, every transition, every new scene.

In the game’s later hours, death comes to the player a lot easier and more frequently, and it’s white-knuckle aggravating to be stuck in areas where enemies can kill you in 20 seconds, and for it to take two-plus minutes for the game to restart at the last checkpoint. The upgrades Joule collects fill up your inventory fast, and the only way to unload them is to head back to your home base. Meaning, two minutes to load the base, two minutes to get back to where you originally were, and pray that the last checkpoint doesn’t involve going through one of the giant dividing doors separating the desert’s larger areas from each other, because that’s another two minutes. Any sense of forward momentum in ReCore is pockmarked by stretches where the game makes it more appealing to be doing something else entirely.

ReCore’s gameplay offers zero surprises once you’ve acquired all of Joule’s potential A.I. helpers and can only focus on the linear dungeons, the unimpressive enemy patterns, and the fact that the whole experience turns into a collect-a-thon for special Prismatic Cores, which act as the game’s key system, to open up new areas. For the player, the last remaining motivation to continue on ends up being the story, which does have its appeal as a well-told sci-fi storybook with amiable sidekicks, a solid Philip K. Dick-inspired villain, and a freewheeling, fun heroine. That is, until you reach the game’s climactic moment and realize that a true ending is gated behind scavenging an obscene number of these cores in the open world.

There are certainly moments when ReCore soars: Joule racking up a long string of robot kills in a row; her talking to her robot friends, especially Fast Travel bot Violet; her stepping out into a new area and standing before massive structures as far as the eye can see; and the little interactions between her and the one other human on the planet. These are moments of impressive beauty and joy, moments blessedly unsullied by ReCore’s technical lethargy. It’s rather appropriate, then, that the best parts of a game set in a desert turn out to be faint illusions obscuring a vast wasteland.

Hue Review: An Experiment in Color