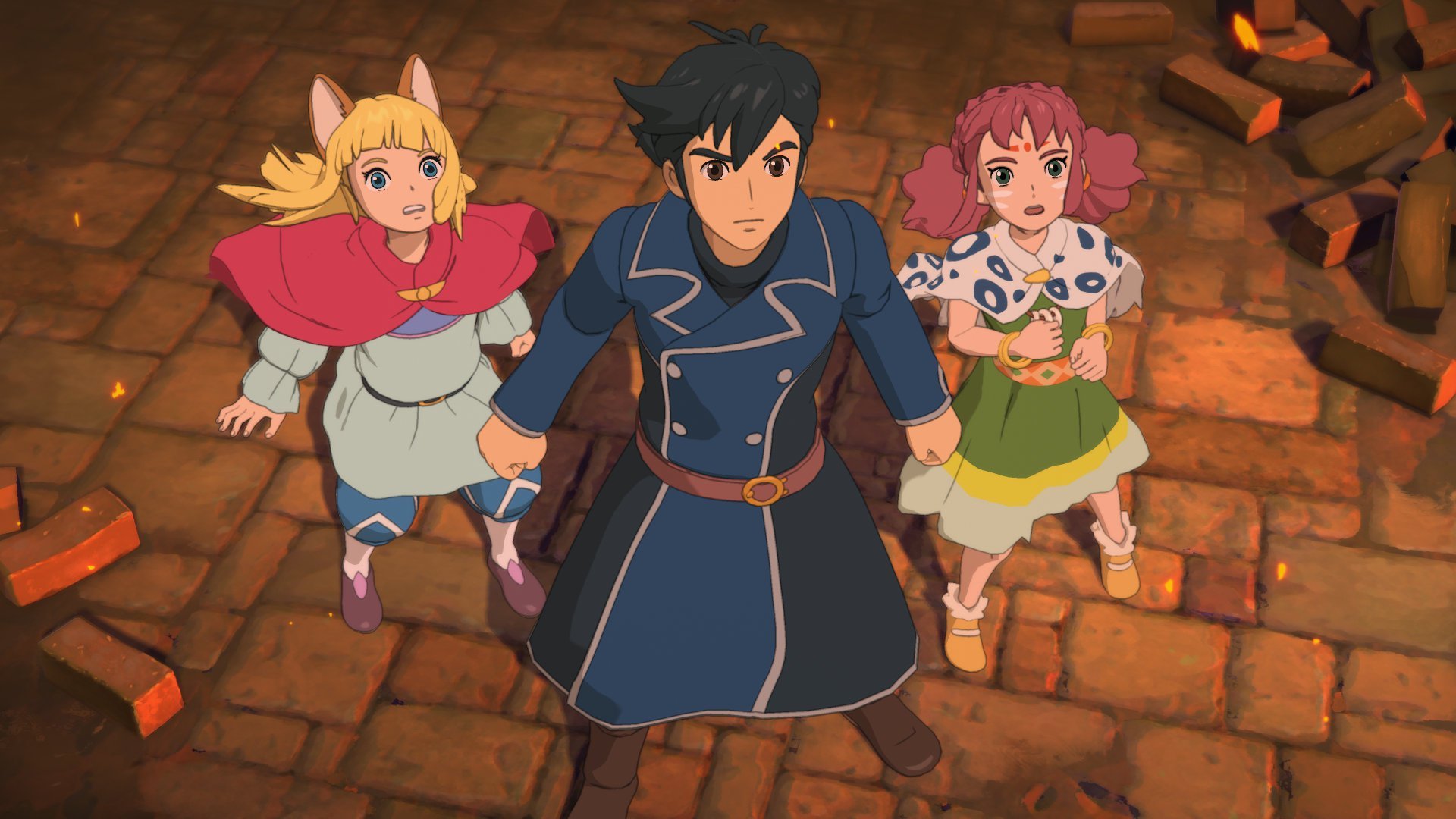 Early in Ni no Kuni II: Revenant Kingdom, your party is given a Facebook-like tool, Leafbook, that provides data on newly recruitable characters and serves as a living history of your quest to make a peaceful world, recording pivotal plot points in snapshot form. The ease with which building a kingdom is summarized by anonymous commenters, many of whom are eager to leave headhunting tips, only exposes Leafbook’s mechanical and lifeless nature.

In the end, the in-game reference to Facebook emphasizes how over-cluttered and unfocused Revenant Kingdom is, as this is a solid action-RPG buried under a steady stream of fetch quests and cookie-clicker-like town-building. Even the game’s winning Ghibli-like aesthetic gets undercut, with all the warm, hand-drawn characters and environments being thrown out the window thanks to the baffling decision to coldly depict the overworld and its military battles with computer-generated, big-headed Chibi-style characters.

The game doesn’t trust that you’ve been grinding its tedious rock-paper-scissors army battles, and as a result the “epic” final showdown has a recommended level that’s laughably lower than that of the optional skirmishes you’ll unlock during the campaign. In order to craft the weapon that can defeat the final boss, you’ll only need to have leveled up your Weapons Workshop to the fourth of six tiers—and in any case, enemies often drop better gear than what you’re capable of making. Such low requirements show just how nonessential the game’s kingdom management mode is.

Because the game puts no emphasis on leveling up your kingdom, the majority of the side missions—recruiting would-be citizens—feel aimless, or, more cynically, like a way to stretch 20 hours into 40. More insultingly, most of these quests, regardless of the scenario, devolve into following a map marker to one of dozens of bland, reskinned, linear caverns, and fighting the monsters within. All this so that these characters might become faceless citizens of your kingdom, workers generating materials that you’ll never need.

Other elements out Revenant Kingdom as a dumbed-down shadow of its predecessor. Ni no Kuni featured a range of lively Pokémon-like creatures at your side, but here they’ve been replaced by a handful of Higgledies: twee, amorphous spirit creatures that speak in high-pitched “higs.” There’s also no analogue here to the 300-plus-page “Wiseard’s Companion,” a compendium that tied together the various creatures, items, and spells of Ni no Kuni, making the world of that game feel like a lived-in fairy tale.

Revenant Kingdom’s underlying conceit, in which young Evan—a half-grimalkin (cat) prince—is ousted from his throne in an uprising of the downtrodden mice, is a good one, though the seriousness of this offense is too easily forgiven. Each of the four kingdoms’ main dungeons feature unique obstacles that must be navigated, such as riding water spouts down an abyss and activating steam engines and rotating floors made of cogs inside a factory. These, however, make up such a small portion of the campaign that it’s hard not to notice the utter emptiness of the game’s other areas. Revenant Kingdom’s final stretch is especially lacking in ideas, featuring a shrine “maze” (with only a single dead end) and then a gauntlet of uncreative foes.

That blandness stands in contrast to the all-too-rare showdowns with each kingdom’s Kingmaker—puzzle-like encounters that require Evan to dodge attacks while he attempts to charge his own so-called “Higmaker” gauge. Revenant Kingdom is, ultimately, a tale about the important qualities of a king. Each kingdom introduces and overcomes a specific vice, teaching players that a leader must not be as greedy as Goldpaw’s gambling Pugnacious, and that a good ruler—like the queen of Hydropolis—can save his or her people without constant emotional oppression. But the biggest lesson of all—and the one that might be most appropriate to our own times—is lost on the game: that a good ruler needs, above all, focus, or nothing ever gets accomplished.