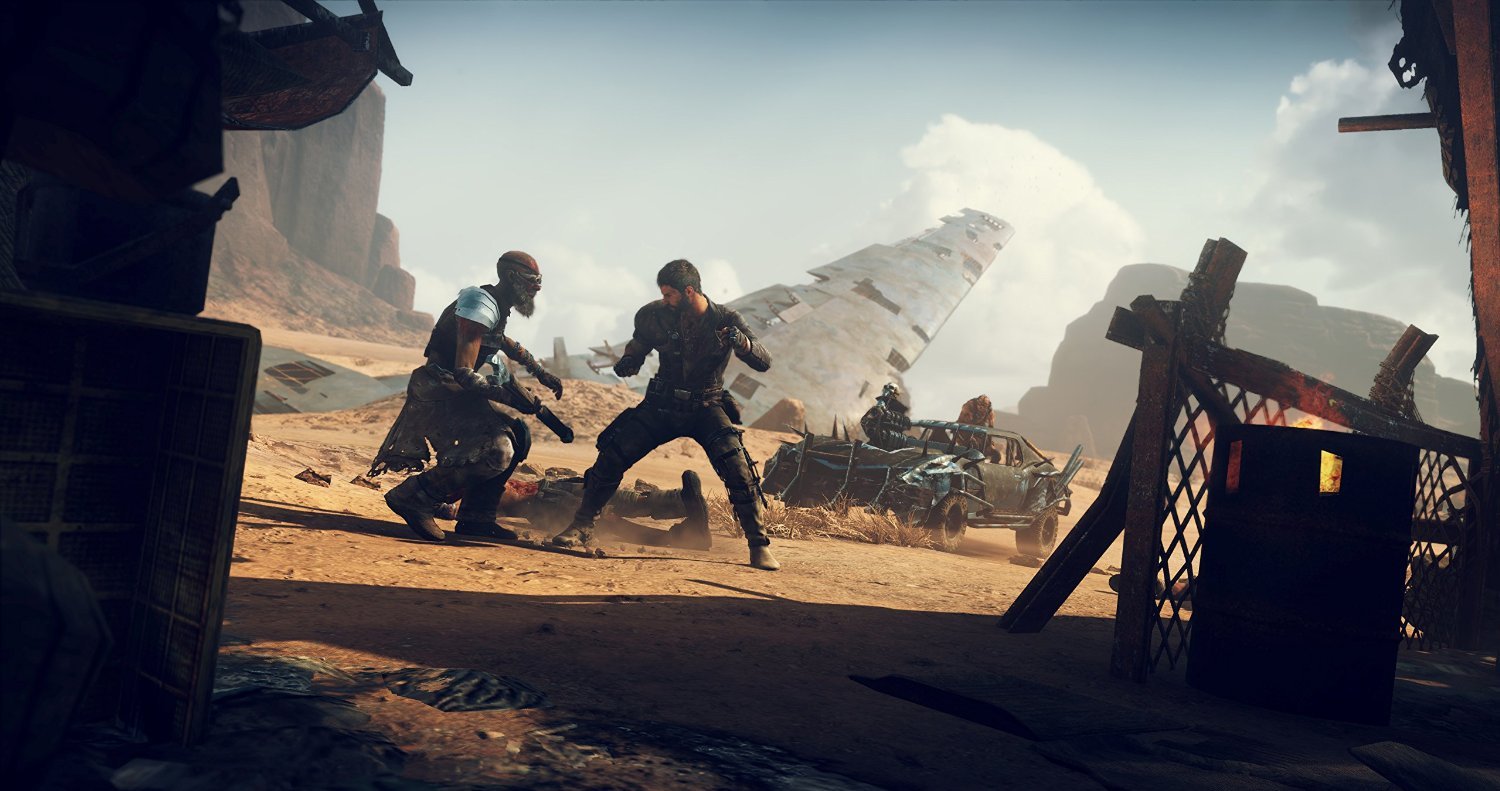 The domain of the Mad Max video game is a lovingly crafted landscape of natural, wondrous desert beauty scattered with the detritus of a world that was once similar to our own. The characters—“friend” and enemy alike—are appropriately feral psychopaths, all with their own unique neuroses, dangerous tics, and festering, often self-inflicted mutilations. Much of the finer details take their cue from Mad Max: Fury Road, but the mythology of the three earlier Mad Max films is well represented. Max himself is chattier than either Mel Gibson or Tom Hardy have portrayed him, but that’s by necessity of the medium. He remains, though, a man searching for some measure of peace, uncertain of whether he’s as feral as everyone else, or if he’s the last sane person in the world. But it’s the cars that the game most successfully captures: wild, rusted, scrambled-together monstrosities fine-tuned for speed, destruction, and death, running the roads in search of resources. If there’s any measure of near-perfection here, it’s the deliriously insane car battles—and if they were at the core of the game experience, then you’d possibly be looking at a bona-fide classic.

Mad Max almost works if you think of it as a staging ground on which a proper Road Warrior tale might be built, much like George Miller has been able to take any random stretch of Australian desert and turn it into an insane, gas-guzzling warzone of fire and bullets. But Mad Max is an open-world game, and like so many others before it, it falls victim to the instinct to fill an open world with capital-C content, which isn’t to be mistaken for capital-S substance. It’s substance that suggests every action has a reason, every task a motivation that adds to character, and as such adds to the overall gaming experience. Content is just a never-ending list of Things You Can Do. And while there’s seemingly plenty of Things You Can Do in Mad Max, the amount of substance is disappointingly paltry. Mad Max even commits a far more venal sin in the process, as the rote Things You Can Do quite often become Things You Have to Do to Proceed.

There are new characters to meet along Max’s journey, all interesting people in their own fascinatingly ugly way (particularly Max’s sidekick mechanic, Chumbucket, a gnarled, evangelical hunchback who suggests Gollum by way of Dennis Hopper), all with problems of their own that need solving. How Max solves them is by performing the same collection of tasks ad nauseam, primarily raiding and destroying enemy camps, disrupting Gastown convoys, pulling down enemy totems, called scarecrows, wherever you see them, clearing minefields, participating in races. All this is in an attempt to lower the influence of the big boss, Lord Scrotus (coincidentally, a son of Fury Road’s Immortan Joe), and dotted throughout the game are choke points where the story will not progress unless an arbitrary number of these quests has been completed.

The most involved are the raids, in which Max must infiltrate an enemy stronghold, destroy the camp’s resources, or kill the top-dog warlord who runs the place. Some ingenuity is involved at the outset: Max can scout the place beforehand, mark the more dangerous enemies, disable traps, pull down sniper towers, and find alternate routes inside. Once inside, you’re beset by hordes of screaming variants of the War Boys. The combat cribs more than a little from Middle-earth: Shadow of Mordor and the Batman: Arkham titles, all Warner Bros. Interactive Entertainment properties, but it’s satisfyingly functional, even tricky at times in a way the aforementioned titles tend not to be. The first few times you conduct a raid, it’s a bit of a thrill.

But once you realize that the layout of these camps doesn’t really change over Mad Max’s playtime, that the warlords are typically copied and pasted with different masks, that the items you scavenge for tend to matter for very little, and that the game generally doesn’t care about any sense of accomplishment unless the numerical threat level has reached an arbitrary point, the thrill is gone. A raid is the only reliable way to lower Scrotus’s threat level in any meaningful way, and often the only way to upgrade Max and his car. Keep in mind, this is for a type of mission that’s actually relatively enjoyable the first few times. But for tasks that feel menial from the first to the last time, it feels like a slow death. Proper scripted missions that deviate from the norm do exist, and there are a few winners: A section involving retrieving the last box of Christmas lights on Earth from a buried, derelict airport is impressive as a haunting visual and as a pure action set piece, since the ending involves a high speed chase through a terminal. This is the kind of moment that should be par for the course for a game bearing the namesake of Mad Max. Instead, moments like these only intermittently break up the game’s vast, soul-crushing monotony.

The game asks one to buy Mad Max as a wasteland messiah whose life, as related by the History Men and Women, consists of spending his best, most sane years playing fetch. When the game brags about his deeds, it’s to mention that he brought back supplies, or brought back someone from the Bullet Farm who can make gunpowder. Even his car, the baddest vehicle ever built, is an afterthought, worshipped only by Chumbucket. The legend of the Road Warrior is the legend of the greatest errand boy that ever lived. And that’s both an insult to fans of the film franchise and a terrible disservice to players of this game.