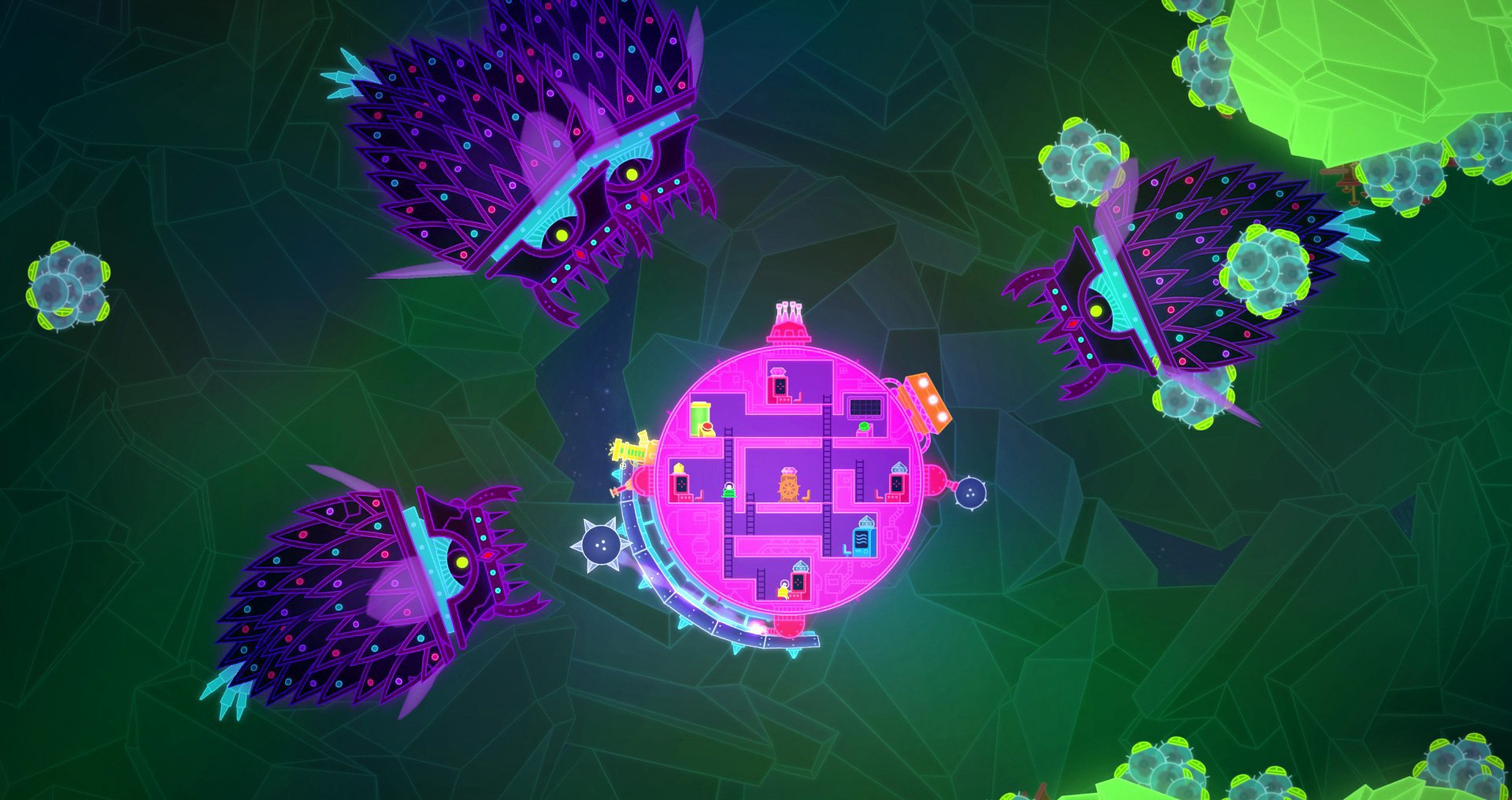 What does one look for in their long-term, exclusive partner? A shared taste in films and music must rank fairly highly on the list, but Lovers in a Dangerous Spacetime makes a convincing case for video games as well. Its bubblegum aesthetics may suggest otherwise, but this is a surprisingly hardcore affair that demands patience, constant communication, and dedication—in short, a serious relationship. After some cutesy introductory nonsense about the fabric of reality collapsing and the need to locate the missing pieces of a reactor which can harness the power of Love, you and a companion are sent off in your spaceship to make everything right. Considerately, and perhaps a bit depressingly, solo players can choose between an AI-controlled cat and dog to assist them.

At first, it’s all rainbows and space butterflies, as the screen erupts with fluorescent greens and marker-pen pinks; even the sparks flying from your hull as it sustains structural damage look pretty. The visual splendor is matched by the most energetic Euro-trance soundtrack since Electronic Super Joy’s, every note goading you with wordless affirmation while you keep getting yanked off course by planetary gravitational fields, frantically dashing away from swelling supernovas and dodging incoming asteroids. Indeed, steering the massive vessel is the hardest and, at the same time, the most rewarding task here. The control method harkens back to early physics-based titles like Thrust, requiring you to position a revolving engine and then boost in order to propel your ship in the opposite direction. The resultant inability to perform an instantaneous turn and the accompanying inertia pull make navigation a wonderfully complicated process of execution and compensation, one whose designed imperfection will produce numerous occasions for total chaos.

Not that bumping against wandering planetoids is your greatest concern. Enemies, ranging from swarming space piranhas to missile-launching bumblebees, can be dealt with by a single gunner when in smaller numbers, but, once allowed to congregate and diversify, they can deplete your seemingly generous health bar in seconds. These battles that form the crux of the gameplay are where cooperation is absolutely essential: Your ship carries several cannons covering different sides, and players must walk, climb, and jump their way to them whenever the need arises. Additionally, there’s a separate console that directs your impenetrable but narrow shield, and another one for a chargeable superweapon. In all, there are six combat-related positions for two crew members in the starting spaceship, meaning that some of the longer skirmishes acquire a puzzle-like feel. The most useful skill in this unconventional shoot ‘em up is neither aiming straight nor quickly dodging out of harm’s way, but the ability to make effective choices on the fly and communicating them successfully, so that the time wasted running around from console to console is minimized—the only true measure of your efficiency.

Sharing these moments of hectic decision-making with your partner and watching together as they build up to a last-minute escape or a disheartening collapse is the best part of the game, so much so that, like with another recent puzzle/shooter hybrid, Galacide, one questions whether the watered-down single-player mode should exist at all. Nonetheless, even the delightful multiplayer mode (local only) has a couple of issues. Controls may sometimes feel unresponsive, dropping you down from a ladder you meant to keep climbing or seating you back at a console you intended to abandon. It doesn’t happen often, but in critical situations it can lead to disaster and major frustration when you have to restart a level, especially given their considerable length.

Moreover, the usefulness of your resources could be better balanced. The shield, because of its ability to quickly protect any side of the ship, is so unconditionally useful, that it’s easy to fall into a situation whereby one player is pinned down at its controls while the other scrambles around trying to cover every other position. It makes for a tactically sound, but rather unexciting approach.

Therein lies the game’s greatest omission. Why settle for the manageable mayhem of a multiplayer mode restricted to just two participants? Reinforcing its overarching metaphor, players eventually become accustomed to each other’s styles and active communication and negotiation are gradually replaced by the safety of intuitively knowing your companion’s next move and responding accordingly. This groove found by lasting partners comes with its own pleasures of increased chances of progress and success, but cannot match the sheer rush of the game’s more chaotic moments. Lovers in a Dangerous Spacetime may be an outstanding, original game, but it’s curiously held back by a stubborn, prudish obsession with monogamy when it should have allowed for a good old-fashioned orgy as well.