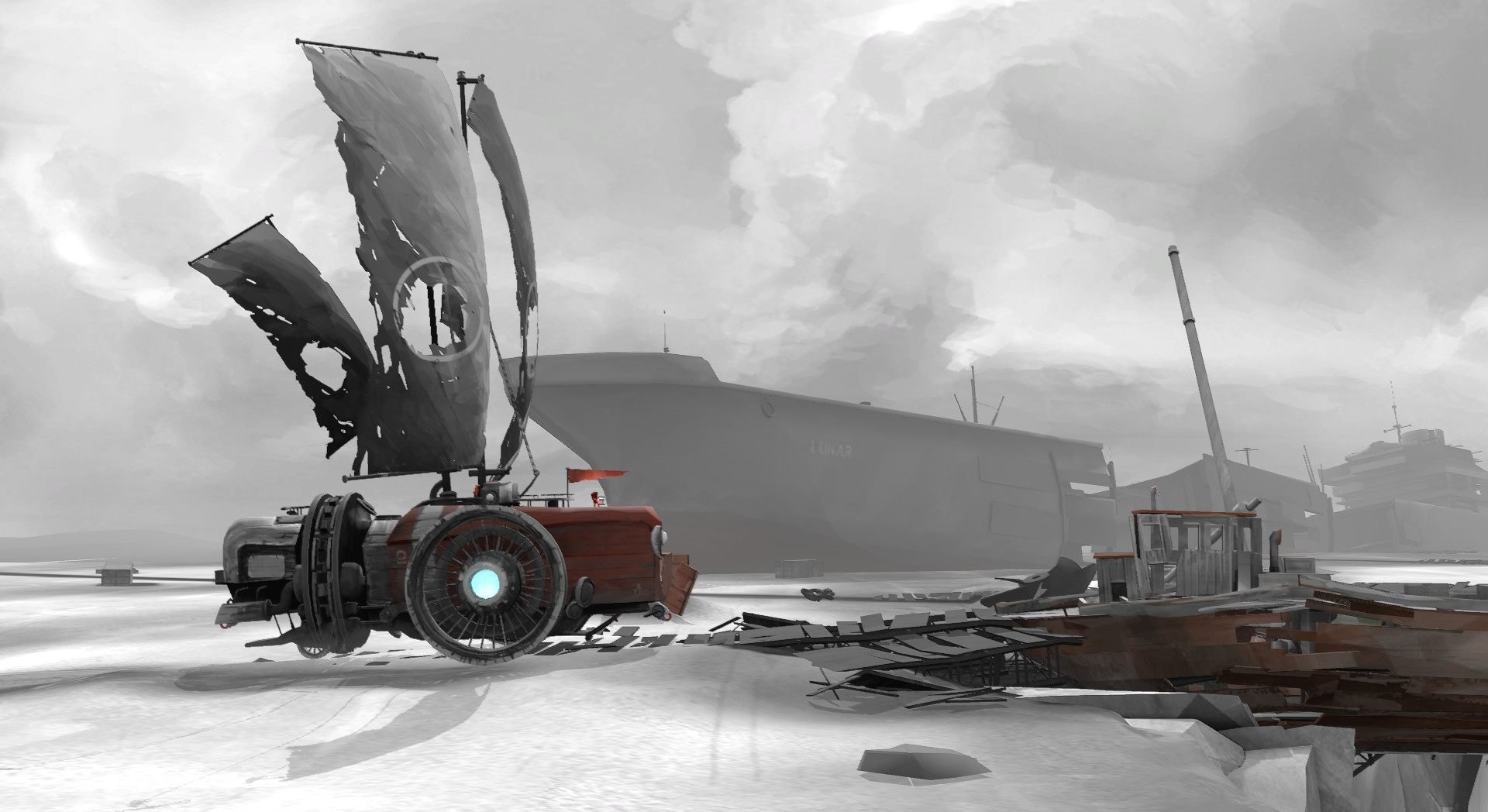 You begin FAR: Lone Sails on foot. The land is gray and sparse and dead, and when you start your trek, it’s one of the only moments in the game that you don’t spend in service of the vehicle resting just off screen. It’s a ramshackle thing, a hybrid of boat and train with just one bed but several stations meant to be crewed and buttons to be pressed; it’s easy to imagine how much more smoothly it might function if you didn’t have to operate it alone. From there, this land-boat becomes your home on a two-dimensional, sidescrolling journey across a wasteland toward nowhere in particular.

The game is meant to simulate the romanticized notion of traveling in a rickety vehicle that might fail at any moment—one that’s unwieldy but unable to be driven by anyone except you. As you burn a crate for fuel in the back before returning to the front because the steam-release button needs to pressed every so often and the ignition never quite sticks, FAR: Lone Sails conjures the feeling of being at the wheel of a vehicle that’s very much your own. Then you notice that the vehicle’s flag is billowing and you shut off the engine, unfurl the sails, and just watch as the wind carries you and the landscape unspools from some imagined off-screen horizon.

It’s a shame, though, that the game fights against such a feeling almost every step of the way. FAR: Lone Sails is played at a distance, with the default view showing a cross section of the vehicle as you scurry around its guts, trying to keep it going. Holding down one button will zoom in slightly, while another will zoom out and make the cross section and machine noise disappear so as to focus more on the scenery. The changing colors of the sky or the ruins that emerge in the background to tranquil music can be beautiful, but the game’s default view forces your eye to the process of refueling and operating a machine that must constantly be refueled and operated. You have the freedom to take the sights in when the sails are up and the engine is off, but the rest of the time you’re essentially spending an entire cruise in your cabin.

The idea is that the more you work on the land-boat the more you’ll come to think of it as a partner in a collaborative journey, though the vessel mostly ends up feeling like a captor. You leave its confines only to add objects to your stockpile of fuel for the vessel or to open the gate blocking your way forward. In return, the land-boat can bash through barriers, so it can ferry you across the wasteland much more quickly than you can travel on foot.

But when these methods are your only form of progress, it doesn’t feel like you’re upholding one end of a bargain, as the game impedes them or requires constant, tedious effort to maintain them. The land-boat takes so much more than it gives. Even the small objects you can find to decorate the interior are tough to distinguish from fuel, regardless of how much you zoom in. The only attachment the game seems designed to support is Stockholm syndrome.

FAR: Lone Sails’s minimalist visual style emphasizes that the vehicle is all you have in the wasteland, but the game forgets that a journey isn’t simply about the means of travel. What scenery you can view slides lethargically from the right side of the screen with no sense of discovery or even of purpose, with scarcely a hint of story to impart. Even the pitstops where you install upgrades or open gates feel slight, a poor trade-off for all the effort that goes into reaching them. Where other games might use this sparseness to suggest what life was once like or what emptied the world, here there’s so little to go on that the game seems to submit that you have no reason to look at the world at all. If there’s an upgrade to your vehicle, you grab it and you keep going because your only objective is to aimlessly chug forward. You feed the furnace. You keep your head down. There’s work to be done.