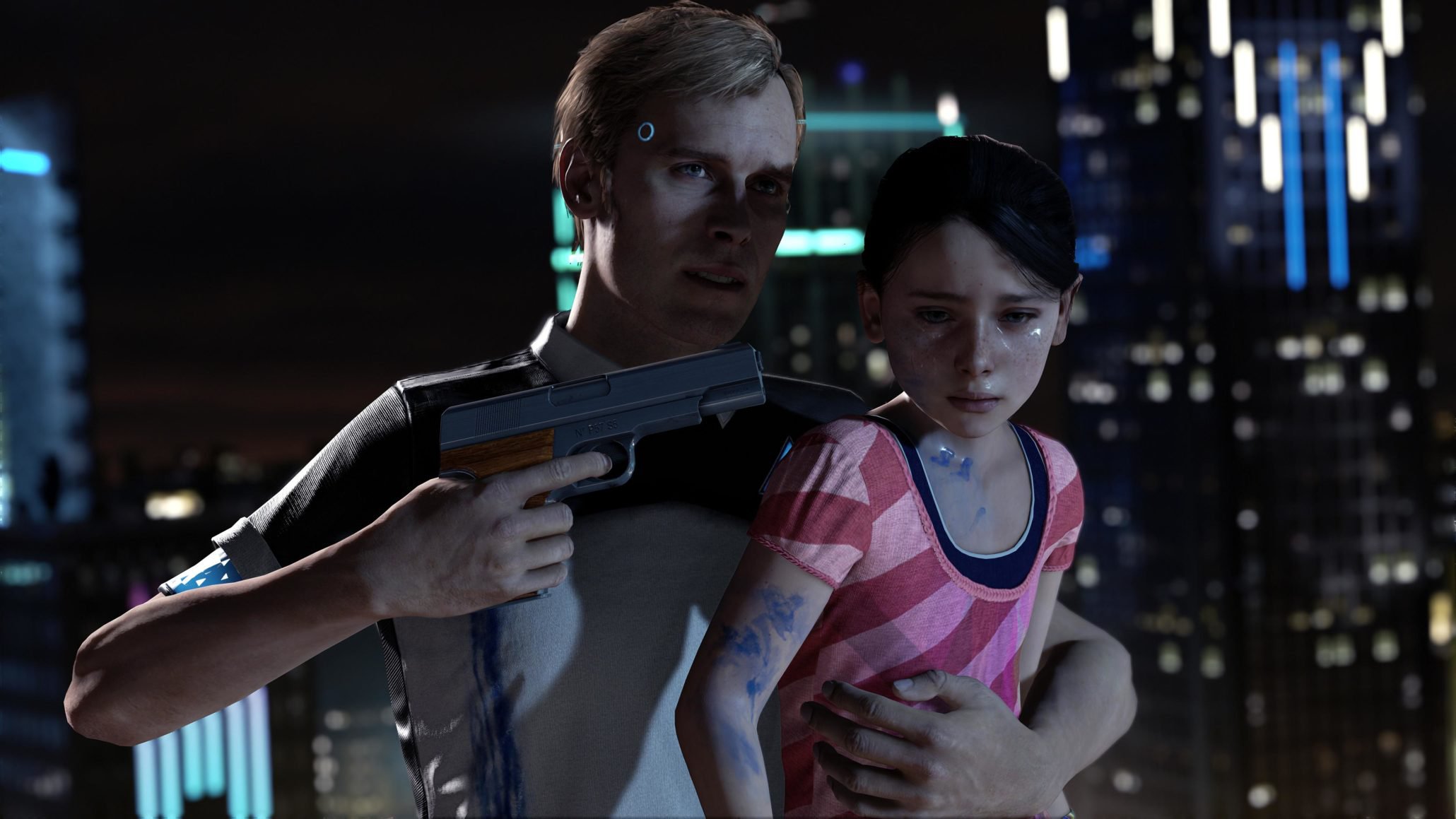 Present-day popular culture isn’t lacking for smart takes on the concept of self-aware androids as allegory for prejudice and existentialism, from film (Blade Runner 2049) to television (Westworld) to music (Janelle Monáe’s Dirty Computer) to video games (NieR Automata). Detroit: Become Human, then, had its work cut out for it in terms of adding something of value to that discourse, but anything would’ve been preferable to nothing, which is unfortunately what the game’s co-writer and co-director, David Cage, has delivered here.

Like all of Cage’s major work, Detroit: Become Human adopts a splintered narrative, interweaving three different stories of a futuristic Detroit. The first follows Kara (Valorie Curry), a domestic-model android who goes on the lam after escaping her abusive owner, taking his taciturn and traumatized daughter, Alice, with her. The second follows Connor (Bryan DeChart), a police android assigned to the surly Lt. Hank Anderson (Clancy Brown) as part of an investigation into a wave of homicides committed by deviant—read: self-aware—androids. The third, and grandest in scope, involves Markus (Jesse Williams), a hospice android caring for a terminally ill painter, Carl (Lance Henriksen, in a warm but brief cameo). After an altercation with Carl’s son ends with him getting sent to a scrapyard, Markus escapes to Jericho, a safe haven for deviants, where his anger at his and his fellow androids’ treatment leads him to become the face of the android civil rights movement.

The game’s vision of Detroit is vibrant and detailed, and the nuances of every human performance are captured with astonishing fidelity. Credit has to be given to the game as a feat of cinematography, with a few stupefying moments of composition. Possibly the best among them is a late-game moment that sees Markus marching into an urban war zone, carrying a holoigraphic flag, lit on all sides by streetlights haloed in near white-out blizzard snow.

The game is also a structural marvel, with every scene playing host to dozens of variations through the player’s choices in dialogue, investigation, even success or failure during a quick time event. Miss finding a clue, fail to ask a dying victim the right question, or forget to speak to some NPC and you can completely change the course of how a scene plays out. Choosing to talk to one person instead of another can have major, permanent consequences. An enormous amount of work has gone into Detroit’s sprawling narratives. Indeed, after two full playthroughs of about 10 hours each, it feels as if I’ve only unlocked maybe half of the branching options the game has to offer.

It’s all in service of a script that, at best, bares itself emotionally but shines a harsh, unflattering light on all of Cage’s deficiencies as a storyteller, and at worst paints him as oblivious to the social, sexual, and racial implications of his work. One of his main problems—his imagination of female peril from a voyeuristically psychosexual perspective—is an old one that he seems incapable of addressing in any meaningful way. In Detroit’s case, there are no less than five examples of a female android being beaten or worse by her owner, forcing her to murder him in self-defense. This is, admittedly, an improvement from Cage’s past games, where that violence goes altogether unanswered, but after all these years going to the same narrative well, “problematic plot device” starts to read a whole lot like “fetish.”

Kara’s story does get awful close to poignance. It’s one of the few serious mother/daughter narratives in gaming, and it’s made stronger by Curry’s heartbreaking and subtle performance. Even then, the story is undermined by an unnecessary twist that robs its conclusion of meaning and purpose. By comparison, Connor and Hank’s story benefits from its lack of ambition, offering up a sci-fi buddy-cop plot about a hard-boiled detective learning to tolerate his less-than-human partner. Though in the end it’s another performance—the sheer force of will that comes with hiring a charismatic performer like Brown—that injects life into story’s cliché-riddled script.

It’s in Markus’s scenario that Cage gets himself into the most trouble. We get glimpses of exactly what kind of societal pain androids bring to society in the game’s version of future Detroit—namely, constant physical abuse and anger surrounding rampant unemployment—but Cage and company never really stop to explore the effects of androids on the human condition, or why the androids awaken to their own agency, or how they cope with it in any significant way. A switch flips, and suddenly, a robot acts human.

Despite having in Williams a talented biracial actor as a mouthpiece for the game’s milquetoast civil rights cheerleading, Cage can’t bear to speak of oppression in anything but platitudes—slogans that his characters can chant at the push of the X button. There’s a fully human black NPC who helps Kara, and when asked why she would risk her life to help deviant androids, she tells Kara that “my people wouldn’t have been free without help,” instead of relating anything specific about the systemic prejudice that there’s no way in hell the advent of artificial intelligence would have erased. It’s allegorical vaguebooking. The game believes it’s a sci-fi version of Eyes on the Prize, when really it’s closer to a sci-fi Kendall Jenner Pepsi commercial.

Not long ago, Cage, in response to allegations of abuse and mistreatment at his Paris-based Quantic Dream studio, famously told journalists to “judge him by his work.” While there are certainly bright moments of creativity scattered throughout Detroit: Become Human, the game is a pretty deep self-indictment in that context: a project about digital creations that have the technical capacity to emote but are utterly devoid of the crucial context, introspection, and experience to make those emotions mean anything.