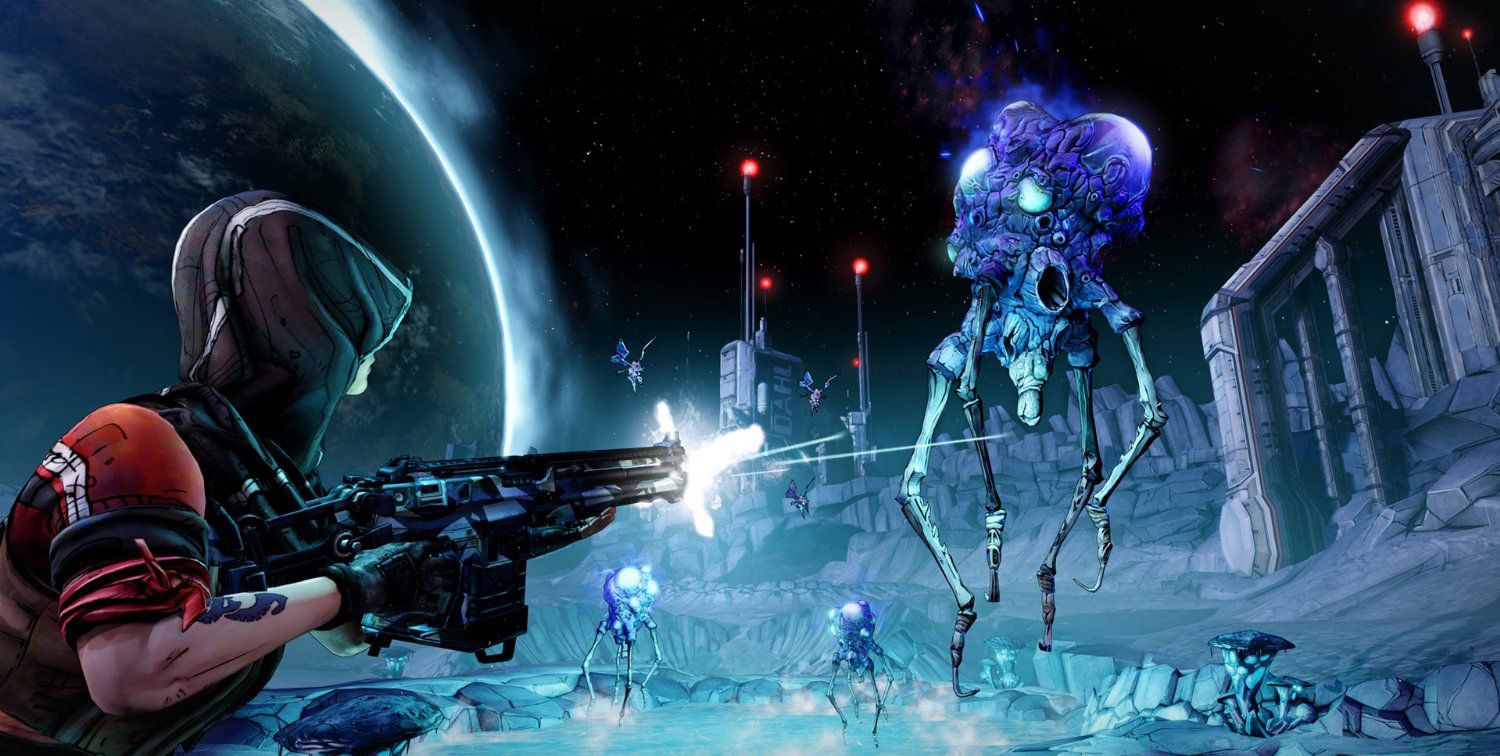 Borderlands: The Pre-Sequel!, which takes place on the moon of Pandora, the setting for the first two entries, isn’t exactly a great step forward for mankind, or even the franchise, as there’s little here that hasn’t been cell-shaded and seen before. But while the moon, Elpis, may be oxygen-light, the game itself is every inch as humor-heavy as previous installments, proving itself to be safely, if perhaps too reverently, in the hands of new developer 2K Australia. Between the violent comedy and the airless atmosphere, which offers new navigational and tactical options, it’s safe to say that The Pre-Sequel! is positively buoyant.

While the actual amount of gameplay falls somewhere between that of the first two Borderlands entries, there’s still a minimum of 20 hours of story, not counting the raw content created by a replayable higher difficulty (True Vault Hunter Mode). New weapon types, like the persistent streams of damage that come from a laser, and status effects, like the slowing and shattering cryogenic ammunition, expand upon an arsenal already numbering in the randomized millions, helping to keep collectors busy. End-game grinding is also addressed in a suitably tongue-in-cheek fashion by the inclusion of a new Grinder device that destroys three old items in exchange for one of potentially higher quality.

Most important, especially to fans of the series, is the inclusion of four new character types, each with a series of three unique skill trees. The essential gameplay can be reduced to a series of shoot-’em-up fetch quests through hazardous landscapes, but even veterans will have to adapt their FPS techniques to make it through. Wilhelm’s cybernetic style will appeal to those who like to brute-force their way through areas, and his robotic pets will assist those who stubbornly continue to play offline. (Due to the variety of character skills and the chaotic swarms of foes, the game is optimized for online play.) On the other hand, Athena uses an energy shield to block, absorb, and redirect damage, which requires more than its fair share of kinetic skill, whereas Nisha’s gun-slinging abilities are great for players with a minimum of technique, thanks to her special move’s empowering auto-aim.

Most impressive, however, is the well-considered design that went into making Claptrap, the annoying comic relief of the series, ridiculous in concept, but deadly serious in execution. Assuming you even pick him (something the game strongly urges you to reconsider), his ability is described as malware, and, in fact, hinges largely on players being able to adapt to randomized gameplay. His VaultHunter.Exe mode is just as likely to create a double-barreled Funzerker (a play on the series’s old Gunzerker class) who’s unable to stop shooting as it is to turn him into a crazed, unicycle-riding melee machine, or a bomb-delivering hot potato. Subroutines boost a different weapon type ever hundred or so seconds, but also penalize any other attack, which can get tricky (and time-consuming) in the heat of battle.

Claptrap is proof of why The Pre-Sequel! works so well; the humor helps to smooth over some of the more repetitive portions of the game, while the sturdy mechanics ensure that players don’t think too hard about what they’re doing. This isn’t to say that there aren’t a few poorly designed areas in which enemies respawn too frequently, or that the aerial combat sometimes leads to unfair death from above, so much as that you’ll be so busy laughing at the tiny-headed berserker who killed you that you won’t think to hurl your controller at the screen.

Borderlands and Destiny both have a lunar setting and a FPS backdrop, but despite the richer graphics and more precise aiming of Destiny, it’s Borderlands and the muss-less drop-in, drop-out online options that has a real sense of purpose. That purpose may be insane, but so is shooting at the same 20 or so character models for hundreds of hours, and at least Borderlands has a sense of humor about it, whether it tasks you with finding the husky, stereotypically Russian Nurse Nina a suitable mate (one that won’t “break” under the stress of deadly combat), helping Torgue the weapon-smith fulfill his explicative-filled vendetta against all laser-type weapons, or finding a faux-Space Jam star’s missing basketball so that he might attempt the world’s highest dunk.

As a self-styled “pre-sequel,” this game does a nice job of making minute advances for the series while largely keeping everything that worked exactly the same (i.e., functional). Plot holes for the series as a whole are filled in; plenty of once-playable characters return as NPCs, or vice versa; and the moon, as it should, not only feels distinct, thanks to the increased vertical movement, but looks quite different to boot. You know what they say: In space, nobody can hear you scream, but they sure can hear you laugh.