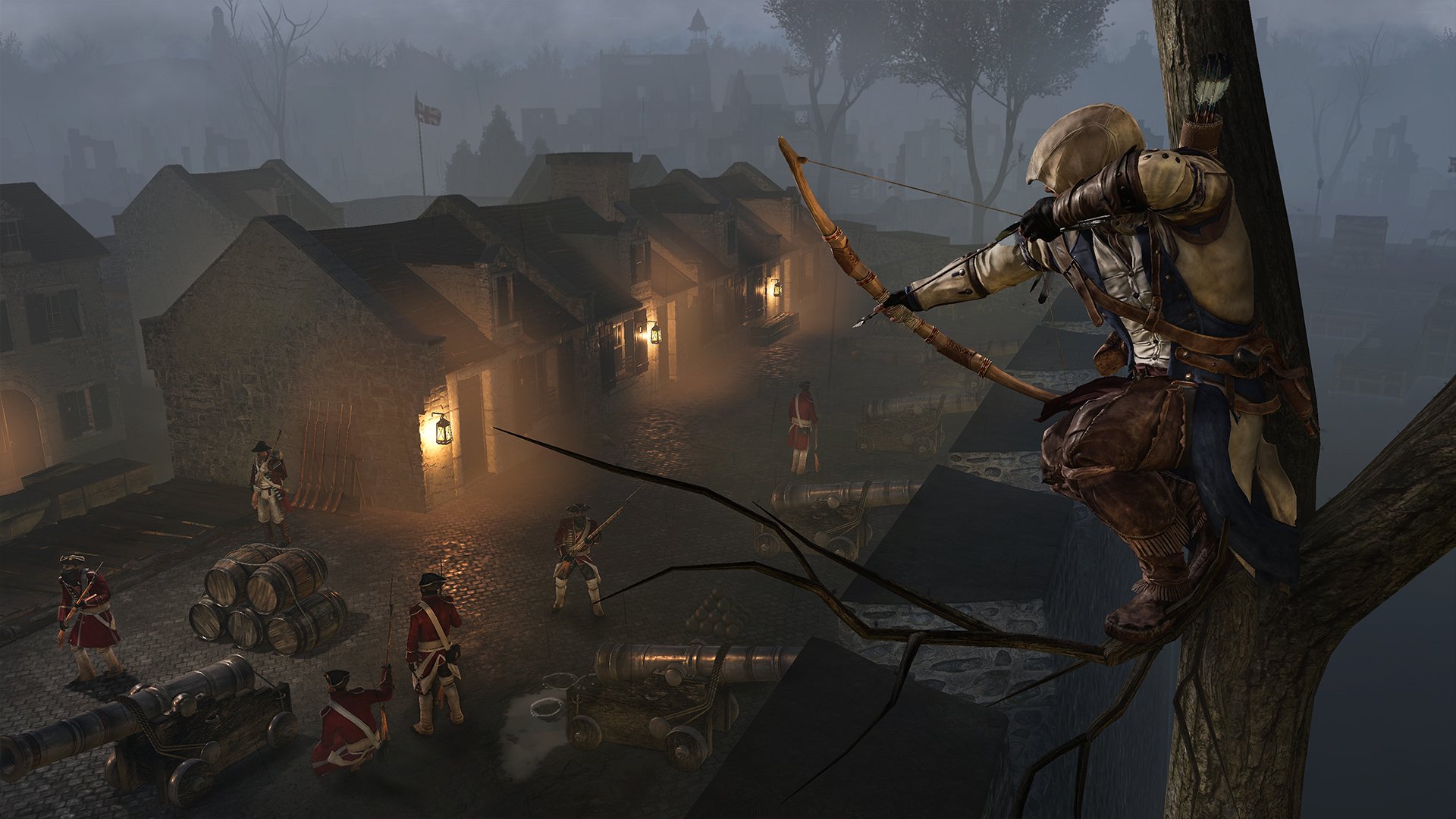 Despite their fluctuating quality, the games in the Assassin’s Creed series remain intriguing for their unique sci-fi framing device of a modern-day protagonist reliving the lives of his ancestors via Matrix-like technology. Beyond immersing players in unique historical locations, the series also has a fascinating narrative spanning centuries that takes full advantage of its medium. A shame, then, that Assassin’s Creed III is a shambling mess that fails at both narrative and gameplay, marking an embarrassing new low for the series. Set during the American Revolution, Assassin’s Creed III tells the story of innocent, naïve Connor, a Native American caught up in the Assassin-Templar war. He trains as an Assassin to fight the British invaders (depicted as viciously, genocidally evil as part of the game’s deeply confused jingoistic agenda) until he learns his father belongs (inexplicably) to the opposing Templar group, and must come to terms with his place in the fast-changing world.

Part of the joy of Assassin’s Creed II and its spin-offs, Brotherhood and Revelations, was exploring the life of Ezio Auditore, a charismatic young Florentine nobleman who grows from a juvenile devil-may-care playboy into a mature, admirable leader starting a family. Genuine character development is rare in video games, and the chronicling of four decades of the character’s life across these three games, with personal insight into his growth and maturation, made for a unique and engaging experience. No such joy with the insipid Connor, as he’s an imbecile; his motivation and decisions change on a whim and his behavior is frequently illogical, rendering him impossible to sympathize with or care about. Characters around him phase in and out of the story when convenient, while Connor is Forest Gump-ed into as many historical events as possible, straining the game’s already wafer-thin credibility. Worse, whenever the game threatens to be about something, such as a tenuous father-son relationship across feuding tribes, it squanders its themes with the most pandering, pedestrian conflict solutions imaginable. To its credit, the game does turn its bizarre American patriotism on its head in an 11th-hour twist that cruelly subjugates Connor and what he fights for; the problem is that his reaction is so baffling that he may as well not be human.

Assassin’s Creed III’s writing is terrible. It isn’t much of a spoiler for me to reveal that the first few hours of the game center around an entirely different (and irrelevant) protagonist than Connor and is complete with a moronic twist that’s unrationalized and spoiled in advance by the in-game wiki, or that the overarching and all-powerful antagonists of the series are easily dispatched in a short side chapter that renders much of the conflict driving the series moot. Furthermore, the ending effectively ruins the ongoing narrative set up by the previous games, reducing every last event in the series to a pointless and elaborate Xanatos gambit set in motion by a preposterous god-like megalomaniac, in addition to trivializing the Native American genocide and making every player action irrelevant. It’s a slap in the face to anyone invested in the series, and arguably exactly the ending the indiscriminate fans deserve. Beyond the awful story, little else works in Assassin’s Creed III. The game is overloaded with bugs, ranging from the presentation (it seems like little graphical optimization was done, with awful glitches throughout and major frame rate problems) to the scripting and gameplay. The controls are frequently unresponsive and often don’t work at all. Worse, scripted events will occasionally break, making sections unwinnable: On numerous occasions, important NPCs fled an area and forced me to restart a chapter, and in one equestrian-dependant mission my horse threw me off only to then fly away. The interface is inexplicably horrible and unintuitive (there’s an actual loading screen to switch weapons), likewise the already bewildering combat forces in a countering system lifted from the superb Batman: Arkham games that, like your favorite song redone by a bad cover band, doesn’t play right and makes you want to throw up.

Because its story campaign is the shortest of the series, Assassin’s Creed III is encumbered with an abundance of horrible, boring side quests that exist only to waste the player’s time. Most of these are lifted from previous games, where the collectibles, territory acquisition, Brotherhood recruiting, and so on were naturally implemented instead of forced, and the new additions, like hunting, are mundane. Chance encounters with predatory animals come down to irritating quick-time events instead of the intense fight-or-flight scenarios seen in the far superior Red Dead Redemption. Much of Assassin’s Creed III—especially the dreadful horse-riding—compares poorly to Rockstar’s masterpiece. The lone saving grace here is a series of naval battles executed with the kind of tight control, graphical clarity, and genuine excitement the rest of the game lacks. Unfortunately, these are mostly relinquished to side content, but perhaps bode well for inclusion in their own game sometime in the future.