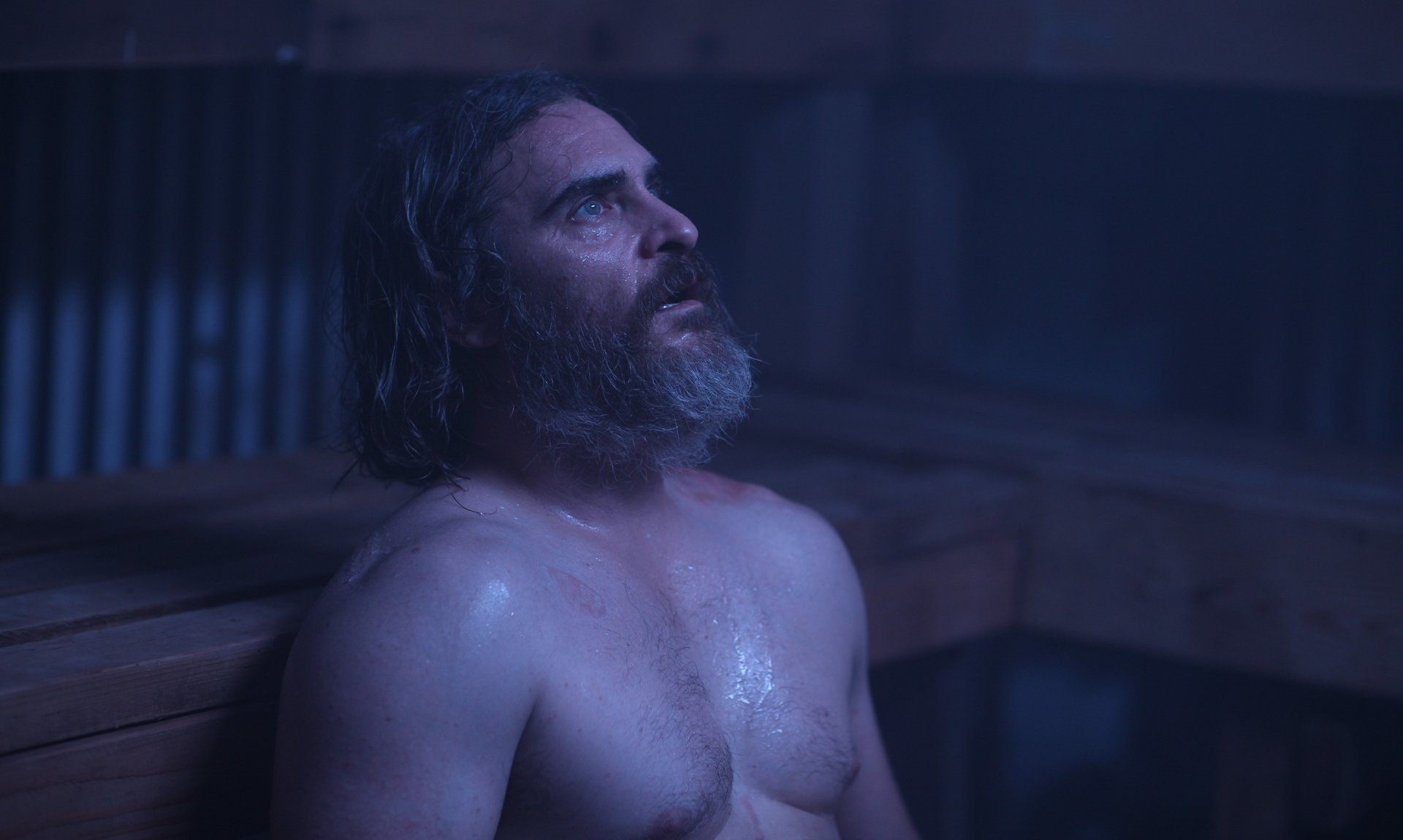 Lynne Ramsay’s You Were Never Really Here could be considered artsy exploitation, a film whose formal dexterity belies its debts to its chosen, and quite squalid, genre. Like last year’s brazenly feel-bad Brawl in Cell Block 99, it’s a lugubrious tale of a violent man adhering to self-imposed principles. Ramsay plumbs the depths of human depravity, and aspires to transcend genre through fractured storytelling and selectively awry compositions, which are rife with empty space and fascinated by mundane details. And the film almost succeeds. But whereas Brawl in Cell Block 99 embraces its insalubrious material and commits to being unsavory trash—albeit proficiently crafted, intellectually curious trash—You Were Never Really Here wants to be something more than just pugnacious exploitation, and in those vapid artful flourishes the film becomes ponderous rather than profound.

Joe (Joaquin Phoenix), a veteran stricken with PTSD, rescues girls who’ve been abducted and forced into sex rings. He can be brutal, though his propensity for violence is mostly glimpsed in the periphery, as in moments caught on security cameras, or conveyed by Ramsay in the way she lingers on the before and after of said violence, jettisoning the point of impact. The film opens with the white-noise roar of a plane tearing through the sky, and the sight of Joe’s face encased in plastic, his mouth full of teeth and open like a maw as a voice tells him to “do better.” (Ramsay, fond of obvious and familiar visual metaphors, leans hard on the image of suffocation to reflect Joe’s mental affliction.) A mélange of close-ups show Joe cleaning up after his most recent job, wiping off a bloody hammer with toilet tissue, burning the photographs of a young girl he’s ostensibly rescued. He trudges down the hallway of his hotel, his face obscured, moving as if he’s dragging a burdensome weight.

Joe is deft in his violence. Hefty and bearded, he lumbers through a back alley, swaddled in a hoodie, the alarm of the emergency exit ringing in his wake. Someone slugs him in the back and tries to jump him, and when he leaves them crumpled on the asphalt, Joe doesn’t even lose his breath. He checks once over his shoulder before trundling off. The film’s narrative structure is, like the skulls Joe shatters with his ball-peen hammer, fragmented. Memories seep into the story in brief flashbacks, a haunted past leaking into a nasty present. A child screams from inside a closet, a foot writhes in the sand, and a woman lies on the floor, her face spattered with blood. The sounds of one scene spill into another, and there’s an efficient fluidity to the way Ramsay mingles Joe’s past with his current endeavors—shades of John Boorman’s Point Blank—but she never really explores Joe’s PTSD in any kind of fulfilling way. Joe is a cipher, and the precipitated flashbacks that ostensibly flesh him out and lend gravity to his sufferance for violence feel somehow reductive, unconsidered, rote in a trauma-by-the-numbers kind of way.

In spite of its fanciful editing and Jonny Greenwood’s sleazy score, You Were Never Really Here is rather minimalist, offering slivers of story and characterization, dwelling on inanimate objects while eschewing human complexities, never pondering the moral quandaries of Joe’s vocation or methods. Ramsay’s film comes fascinatingly close to being a one-note genre exercise, albeit one that’s perhaps a tad more ambitious than most of its ilk. The filmmaker’s visual talents and Greenwood’s eclectic score—which suggests a delirious hunk of 1980s detritus, like something by William Lustig—that keep things intriguing, and keep one hoping that the film will reach the greatness to which it aspires. You Were Never Really Here isn’t really concerned with its characters, but with the corruption of power in our current governing systems, and one perhaps wishes Ramsay found a metaphor less conspicuous than politicians literally raping young girls to make her point. The film recalls, at times, an insipid misreading of Martin Scorsese’s Taxi Driver.

Compare Ramsay’s treatment of Joe’s cursed past with Paul Thomas Anderson’s handling of PTSD in The Master. There, Phoenix, playing a Navy vet with the unhinged intensity of a feral animal, taps into the aching humanity of a man whose experiences in World War II leave him susceptible to the manipulation of a cult-leading patriarch. His anxieties and solecisms come to define him and dictate his life’s potential. They eat away at him while at the same time building up, like calcite, weighing on him, toughening him. Joe has obviously experienced great horrors, and his is a past that’s plagued by brutality and compunction, but all that pain seems to serve is a proclivity for hitting bad men in the face with a hammer while Greenwood’s score wails. (You Were Never Rally Here also commits the sophomoric and irksome sin of showing a daydream suicide for a shock, a gimcrack fake-out—a trope that’s up there with that of people sinking into murky water to signify a sense of hopelessness, an image of which Ramsay is also apparently fond.)

Phoenix has a prodigious gift for playing crazed or crazy men with empathy, not relying on tics, but rather finding the pain in and purpose of those tics. Despite playing a vacuous agent of chaos in You Were Never Really Here, he brings to the role a sense of fatalism, a notion that violence is, like breathing, inevitable. His brutality is tender. Notice how Joe talks to his ailing mother (Judith Roberts), the way he rolls up his pants to mop the floor when she gets soapy water everywhere; how he so nonchalantly and apathetically drops a knife toward his toes while talking to her; and how he squishes the green jellybean, his favorite kind, before popping it into his mouth. Destruction is, it seems, ingrained in him. “It’s okay, Joe,” intones a young girl (Ekaterina Samsonov) he’s just saved—though whether she’s actually saved is ambiguous. Her innocence is now ruined, as she’s the one comforting him. “Saved” is a nebulous idea. Maybe one can never truly be “saved” from a world that elects rapists as governors. Maybe one shouldn’t be.

And who are these shadowy governors anyway? What’s this secret underground network of potentates and pedophiles, and how does it operate? How deeply does the corruption pervade? None of these questions are of great importance to Ramsay, whose disinterest in realism and logic lend the film an oneiric air of menace, a sense of insurmountable paranoia. We don’t know how deep the insidious operations go, so we have to assume the worst. There’s no sense of comfort at all, and this is the film’s great strength: the unnerving, claustrophobic feeling that our leaders are sinister, and Joe’s efforts to save one girl are, ultimately, not enough.

However, the film’s efforts to conjure up and sustain this cloying sense of paranoia are also not enough. Depicting the government as corrupt and nefarious is no longer a compelling enough provocation, and Ramsay has nothing particularly challenging to say about violence, its causes or consequences. You Were Never Really Here is a fleeting mood piece that, for its occasional moments of startling beauty and Phoenix’s auching tumult, doesn’t linger. Though maybe a film in which life is ethereal and so easily lost, in which missing people aren’t missed, should also leave behind very little.