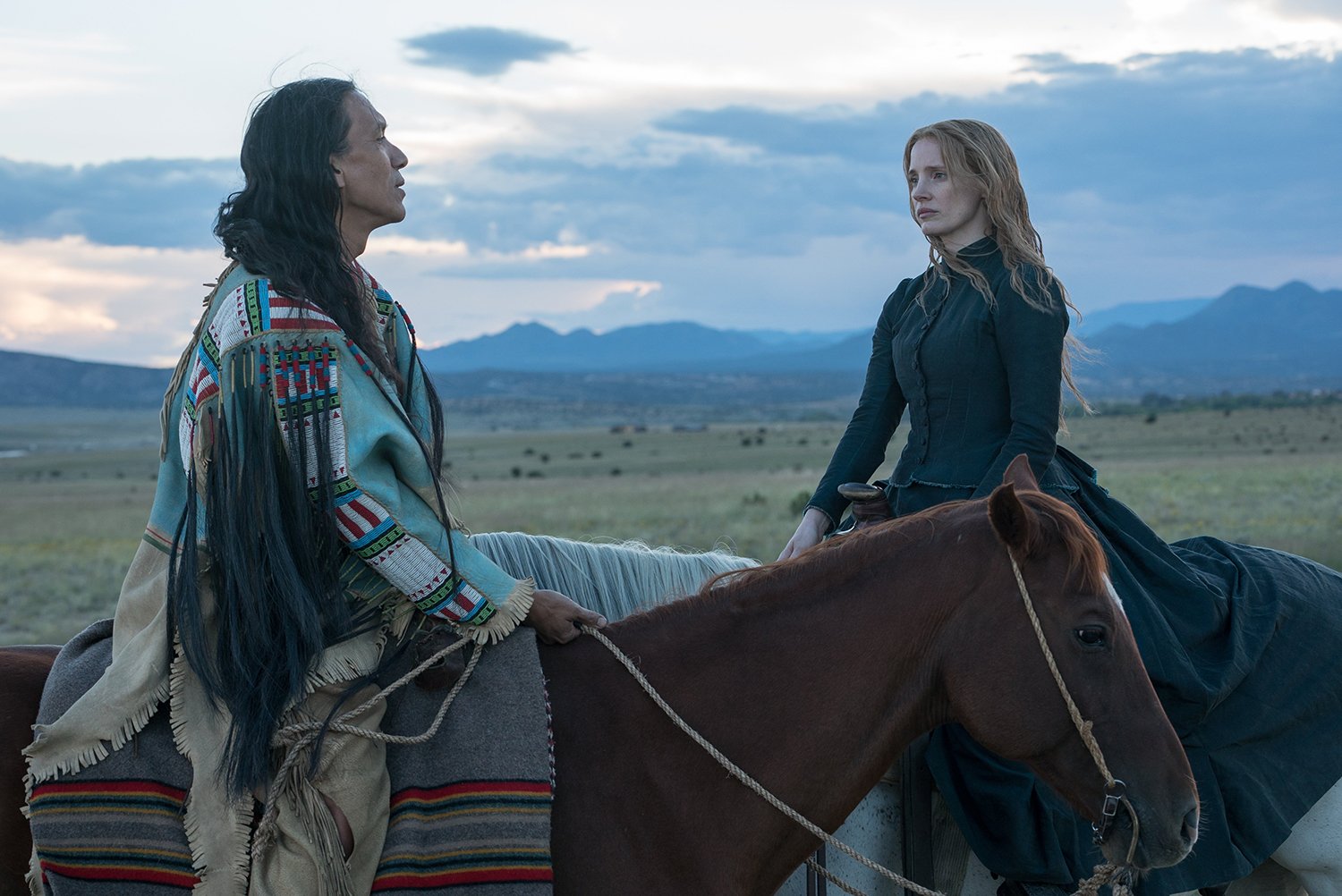 Susanna White’s Woman Walks Ahead tells the simplified story of Catherine Weldon (Jessica Chastain), a painter from New York City who travels to a North Dakota reservation in 1890 to paint the portrait of the legendary Lakota chief Sitting Bull (Michael Greyeyes). There, Weldon enmeshes herself in the negotiation between the U.S. 7th Cavalry and the Sioux over a new allotment treaty, which is land theft disguised as democracy. The Battle of Little Big Horn—in which Sitting Bull and many other chiefs slaughtered George Armstrong Custer and his men—still hangs in the air, and these tensions gradually build to the federal army’s massacre of the Sioux at Wounded Knee. The film, then, is something of a rudimentary Wounded Knee origin story.

White and screenwriter Steven Knight are straightforward about the hypocrisy and barbarism of the U.S. government, and their white patriarchal guilt is the film’s driving energy and motivation. It’s inconceivable to the filmmakers that Sitting Bull might be human, rather than a hunky angel who waxes poetic about the Plains while trading moony glances with Weldon. As portrayed here, Sitting Bull suggests the sexual fantasy of a naïve white woman, like Chastain’s Weldon, who’s looking to get out of the city and mix it up with people who aren’t like her posh and abusive father. Missing from the film is Sitting Bull the warrior, icon, and tactician, who was evoked so vividly and beautifully by the real Weldon and photographers such as D.F. Barry.

Also missing from the film is Weldon’s own ideology. In reality, Weldon was consciously political, though in Woman Walks Ahead she’s a sheltered painter who gradually becomes woke to the inhumanity of the American military’s treatment of Native Americans. This Weldon is a harlequin princess, waiting to be culturally educated by her prince, and an aspiring revolutionary who often marches with unearned confidence into the fray of danger. (And this confidence, with one notable exception, is rarely critiqued by the filmmakers.) Many contemporary films are so obsessed with rendering female characters “active” and “actualized” that they forget to ensure that the protagonists are interesting. Weldon is shown to have little eccentricity, fear, cunning, desire, experience, or any other quality that might individualize her at the expense of sullying the filmmaker’s patronizing sense of her purity. As a character, Weldon suffers the same fate as Sitting Bull, having been reduced to a signifier of White and Knight’s retroactive political correctness.

Much of Woman Walks Ahead involves two ciphers, then, who stroll the Plains awaiting a historical atrocity that isn’t dramatized on screen. The film suggests that Weldon and Sitting Bull—who are both much younger and comelier here than in real life—had a strong sexual connection, though the filmmakers aren’t willing to risk the crassness of spicing up Sitting Bull’s impending demise with an explicit love story. This skittishness suggests an attempt to have it both ways: We’re given the affair, implicitly, without the film quite plunging itself into the white wish-fulfilling terrain of Disney’s Pocahontas. Meanwhile, Bill Camp and Ciarán Hinds occasionally bring the film to life as evil and complacent American officers, respectively, while Sam Rockwell offers a lively gloss on the timeless stereotype of the scoundrel who secretly has a heart.

Rockwell wrings admirable pathos from a moment that’s now required of American westerns, in which his character apologizes to the Native Americans for killing them. And this sort of scene is growing as offensive in its own way as the colonialism espoused by classical westerns. Say what you will about the racism of John Ford’s more disturbing films, but it’s at least a point of view that illustrates undisguised, often ugly emotion, which is more dramatic, and potentially even more respectful, than the guarded, self-conscious platitudes that glut recent westerns like Scott Cooper’s Hostiles. Ford’s killer Native Americans, even when played by white men in brown face, are more vital—more thunderous, emotional, unresolvable, and chaotically reflective of the atrocious history being dramatized—than the neutered, all-suffering stereotypes that we get from films like Woman Walks Ahead, which encourage white audiences to feel like saviors merely for watching a bad movie.