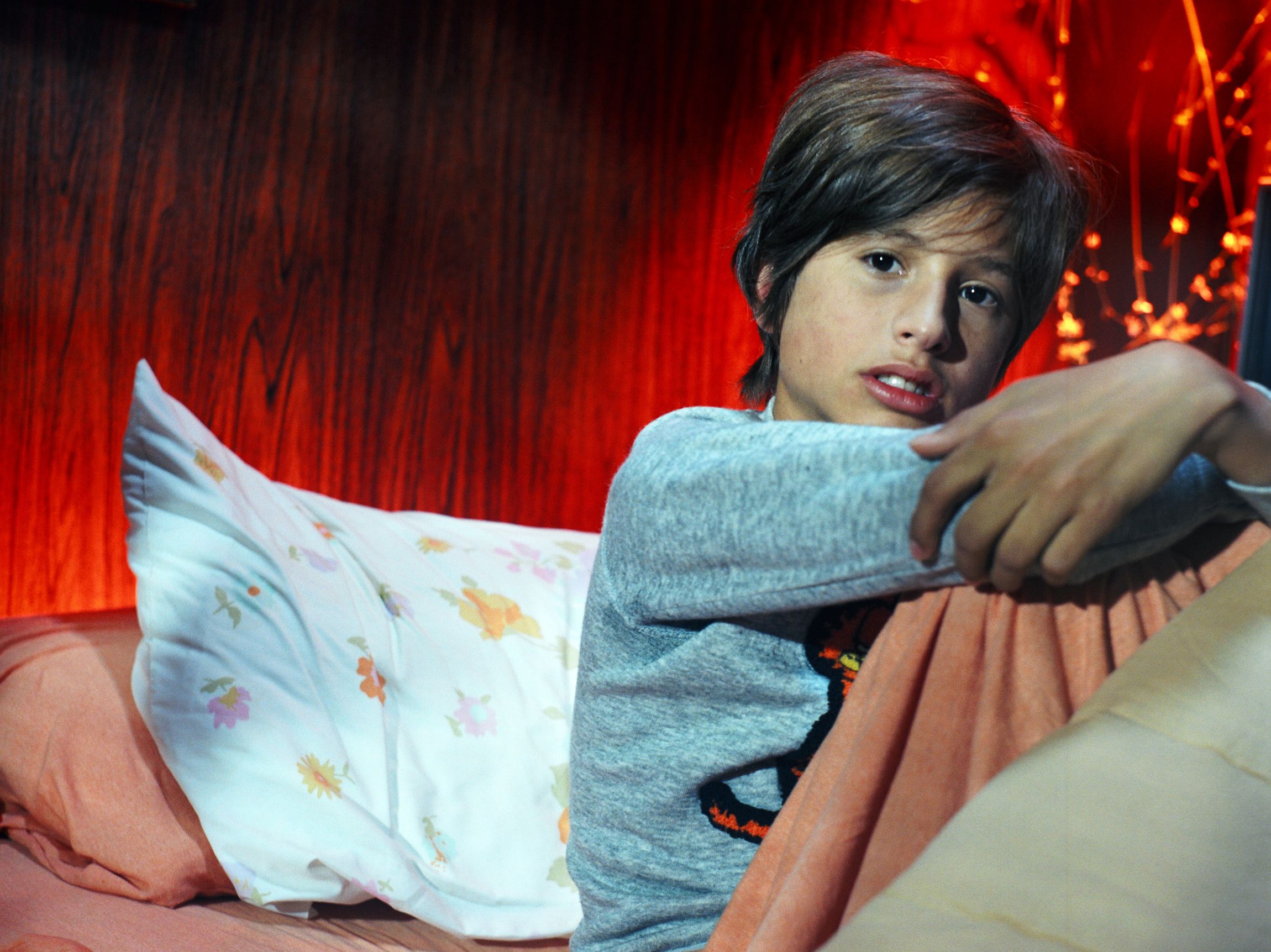 Thirteen-year-old outcast Logan (Malcolm Stumpf) wants to be loved. This is discernible from the fact that he writes “I Want To Be Loved” on his shirtless torso with red lipstick. And when the young boy has his romantic overtures rebuffed by brooding hunk Rodeo (Patrick White), he suffers a broken heart. This is evident from his decision to scrawl “I Am A Broken ♥” on his chest. And on and on and eye-rollingly on goes the preciousness of Cam Archer’s Wild Tigers I Have Known, an emphatically avant-garde affair that recurrently undercuts its portrait of evolving pubescence with groan-worthy symbolic posturing. Like the spaced-out love child of Mysterious Skin and The Heart is Deceitful Above All Things but without their respective finesse and lunacy, Archer’s first full-length feature is fixated on the anxiety, self-doubt, and confusion of adolescence, charting Logan’s struggles to make sense of his feelings for Rodeo in the face of both his straight friend Joey’s (Max Paradise) preoccupation with attracting the attention of girls, as well as older bullies’ verbal and physical abuse.

Beginning with a zoom into video footage of grappling wrestlers (accompanied by an ominous wall of electro-buzzing sound) that quickly devolves into abstract pixilation, the director’s aesthetic is a blend of astral, masturbatory, and animalistic imagery with a psychosexual slant. The chief motif (the film’s title notwithstanding) is the mountain lion, many of which roam the area surrounding Logan’s Santa Cruz, California high school and with whom Logan—believing the creatures are feared simply because they’re misunderstood—intimately identifies. Sexual identity construction is the primary goal of each of the film’s characters, whether it be via Johnny’s hilarious “Ways to Be Cool” list (the answers: motorcycles, “Hollywood,” and online relationships) or Logan’s eventual employment of a female alter ego named Leah (voiced, while Stumpf wears a Zorro mask and doesn’t move his mouth, by actress Ruth Elliott) that he uses over the phone to lure Rodeo to a lion cave rendezvous. Tapping into the hope conferred by youth’s aptitude for reinvention, Archer finds clumsy beauty in Logan’s cross-dressing confrontation of Rodeo’s girlfriend, his awkward failures at seduction, and his climactic communion with his feral kindred spirits.

Between Tarnation director-subject Jonathan Caouette’s vocal cameo and a reference to River Phoenix that feels like a lame shout-out to executive producer Gus Van Sant, Wild Tigers I Have Known self-consciously attempts to stake its claim to a tract of the queer cinema landscape. Although attuned to the disorientation that accompanies kids’ entry into the daunting realm of erotic adult desire, Archer’s debut lacks a healthy measure of maturity—every time Logan begins using his body as a billboard, or his monstrous Mommy Dearest (Fairuza Balk) shows up to bulldoze his confidence, or contrapuntal, telephone-filtered narration cascades over the action, the tone veers away from hallucinatory poignancy and toward aggravating pretentiousness. In its ultimately unsuccessful quest to elicit emotional sincerity from mannered stylization, the film comes across as the work of a director who—similar to his budding, bewildered protagonist—is still engaged in a process of self-discovery and definition. And as demonstrated by the maddeningly juvenile affectations that eventually define Wild Tigers I Have Known, it’s a process that’s far from finished.