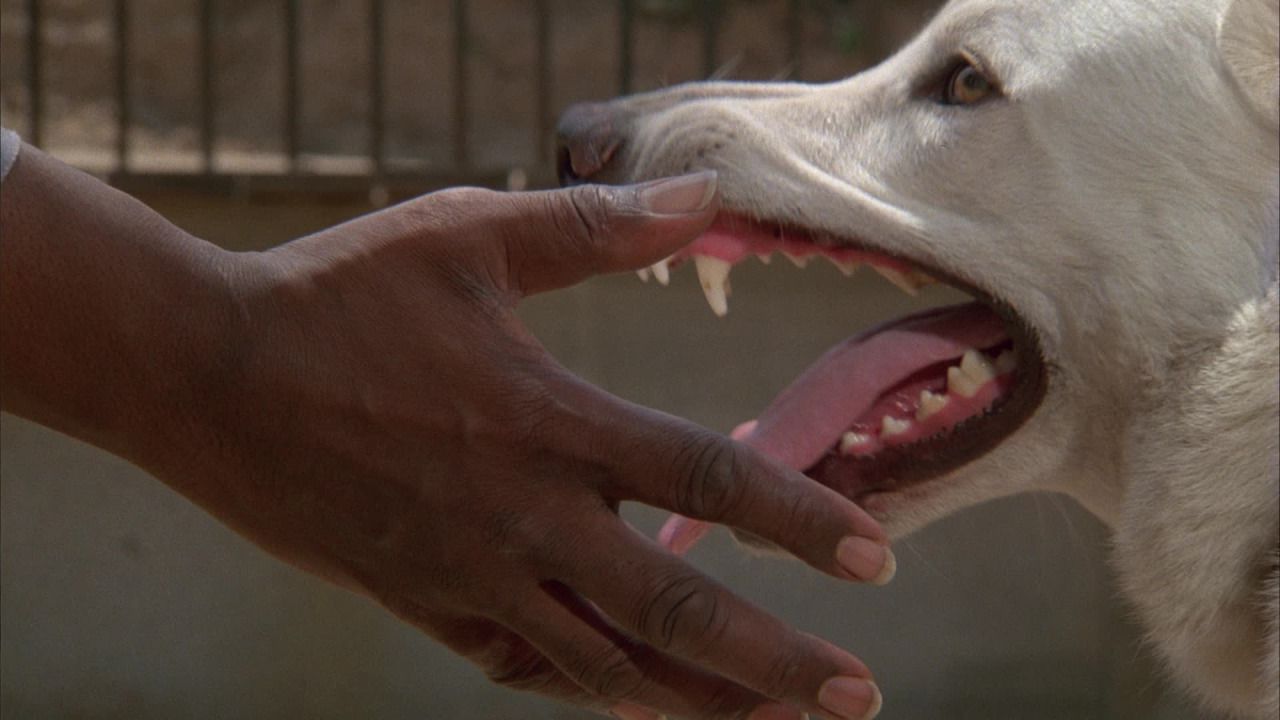 Hate is a dog from hell in White Dog, Samuel Fuller’s abused and abandoned late-career masterpiece about homegrown racism. The same unsettling central concept—a hound that’s been raised to attack at the sight of black people—that had made the project a hot property in the 1970s was deemed too inflammable when Fuller filmed it in 1982. Forgetting Fuller’s previous examinations of racial turmoil (including The Steel Helmet, Run of the Arrow, and The Crimson Kimono), the studio gave in to industry concerns and suppressed the film for nearly a decade. Accused of supplying racist ideas, White Dog is in reality the director’s most searing confrontation of the irrationality of prejudice since Hari Rhodes’s black inmate in Shock Corridor improvised a Klansman hood out of a pillow cover. As in that film, the blatant didacticism of the metaphor is transcended by Fuller’s instinctual cinematic impact, evident here as soon as a flashlight pierces through the nocturnal darkness of his opening image.

Julie Sawyer (Kristi McNichol), a struggling Los Angeles actress, takes in the stray pooch she nearly ran over on the street. Playful and protective, the animal reveals a savage side in vicious attacks, killing a street sweeper operator and attacking Julie’s friend on a movie set—both of whom happen to be black. The nature of the beast is not exposed until the heroine takes the dog to an animal compound and the owner (Burl Ives) recognizes it as not merely an attack dog but a “white dog,” a “four-legged time bomb” whelped by bigotry. Can hate be unlearned? For Keys (Paul Winfield), the shelter’s black trainer, killing the dog would be like admitting defeat in the face of racism, so he obsessively sets out to deprogram it. Locked in gladiatorial battle inside a dome cage, man and dog engage in a bold literalization of the race war that might have been ludicrous if not for the volcanic moral force with which Fuller and Winfield invest Keys’s zeal for reversing the world’s obscenities. Using his own skin to try to change the canine Mr. Hyde back into Dr. Jekyll, Keys is the character most in sync with Fuller’s fierce, contradictory brand of humanism, achingly conscious of injustice yet too compassionate to not seek ways to end it.

Unlike its purebred German shepherd protagonist, White Dog is something of a mutt: Part marauding-animal horror movie, part Afterschool Special, part tragic-sardonic agitprop. Full of startling close-ups and arresting visual contrasts (above all the stirring image of the ebony hand soothing the hound’s snarling pale snout), it’s a work that envisions racism not with a guttersnipe’s shrill righteousness but with a scarred humanist’s awareness of how ignorance and pain can be toxically ingrained into the fiber of society. Meeting head-on both the blood-spattered dog and the grandfatherly bigot who indoctrinated it, Fuller asks who the real animal is. (Though a powerful allegory, the idea of a racist pooch comes from a nonfiction novel by Romain Gary; Fuller the seasoned reporter surely understood that the truth is stranger—and uglier—than fiction.) It’s easy to see why people did not want to face Fuller’s unmuzzled provocation: Rather than a reassuring pat on the back, the film leaves them with the view of conditioned hate spinning among the characters like a Russian roulette, until it attacks with precisely the kind of power that wrestles the filmmaker’s audacity from its B-movie roots and into politicized art.

5 for the Day: Van Heflin