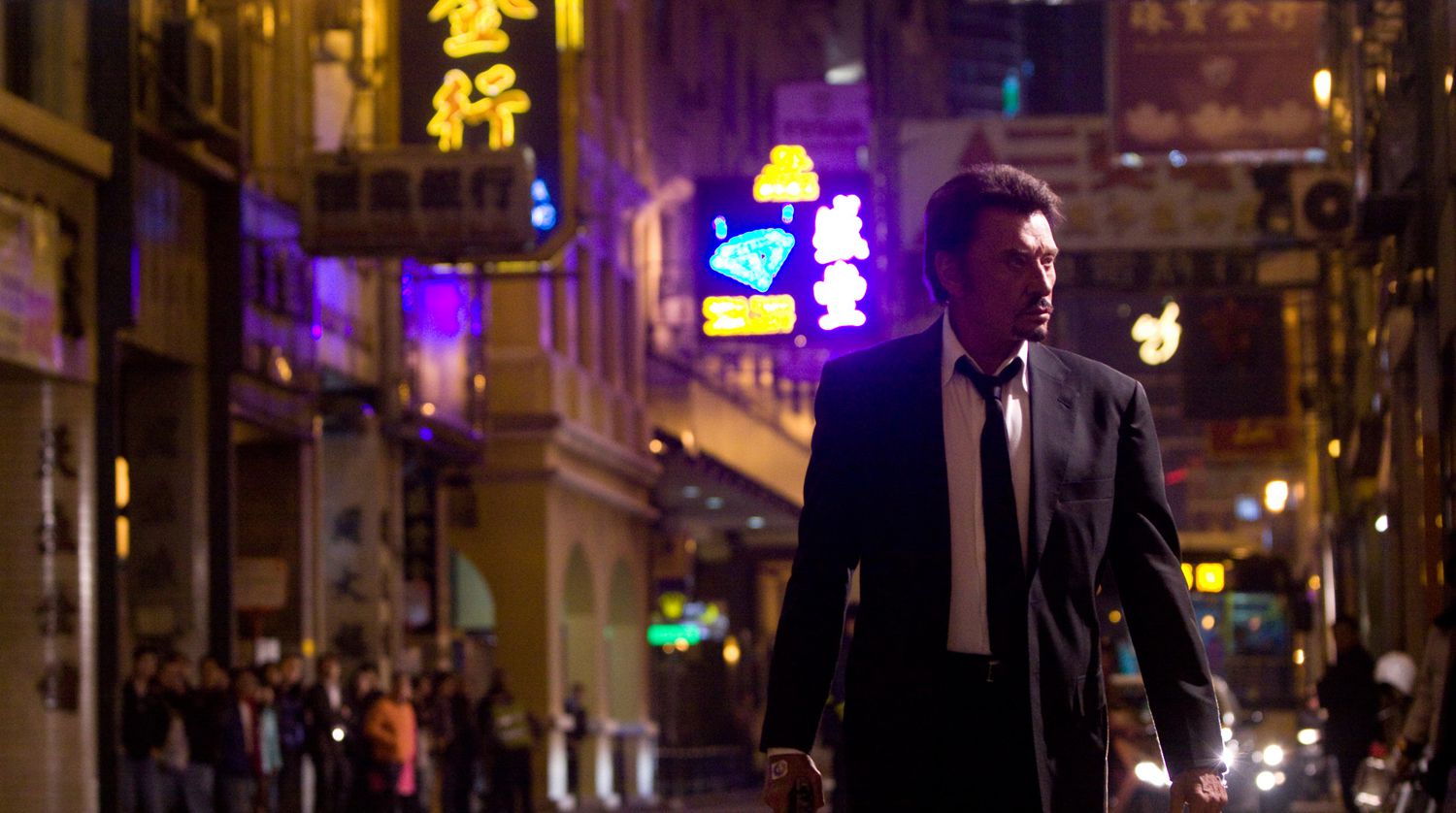 Directionality and movement are more important to Hong Kong action auteur Johnnie To than any other director working today. His films live and breathe through hypnotic tracking shots, revealing zooms, graceful slow motion, and pinpoint blocking, structuring entire criminal universes around the struggle for terrain and interior space. Forward momentum, whether it’s the single take opening shootout in Breaking News or the umbrella rain dance in Sparrow, always plays an essential role in the relationship between character and location, style and theme. To’s great achievements, namely Triad Election and The Mission, combine this masterful aesthetic approach with densely layered characterizations, elevating the mashup of bullet blasts and audible pops to a poetic level.

To’s latest genre effort, an often thrilling but equally confounding hit-man saga entitled Vengeance, follows one man’s quest to avenge the brutal slaughter of his family killed by triads in Macau. It contains all of the striking emphasis on movement one would expect from a To film, including a myriad of superb action set pieces orchestrated in truly unique locales, but it lacks the character complexity inherent in To’s best work, relegating most of the manly interactions to simple grunts oozing with obvious genre cues and drama. In this sense, Vengeance is uneven, fractured, and occasionally trite, even while consistently engaging the beauties of extreme stylization.

As with most To films, the narrative jump-starts the action almost immediately. Frenchmen Francis Costello (Johnny Hallyday) arrives in China to find his daughter alive but shredded with bullet wounds, while his son-in-law and two young grandchildren lie dead a cold slab in the morgue. The concise setup and familiar thematic undertones allow the director to focus entirely on Costello’s movements. Dressed in a sharp black suit and dark sunglasses, he becomes engulfed in a foreign space glimmering with neon lights and intricate architecture. After vowing to find the three perpetrators responsible for wiping out his family, Costello happens upon a separate team of killers, the stoic Chu (Anthony Wong), the swift Kwai (Gordon Lam), and the durable Fat Loc (Suet Lam) just finishing up a job of their own at a posh hotel. Strangely, this silent chance meeting unites all four under a flag of duty, a common code that feels connected to the western more than the gangster film.

The men form an almost instant bond, one that gets even stronger when Costello reveals he suffers from memory loss and will not be able to remember his promise of revenge. This time-sensitive plot device reeks of Memento, but To doesn’t overly emphasize Costello’s declining condition. Instead, he relies on stoic glances to develop the characters, a motif essential to the key sequence at Costello’s daughter’s house. As Chu and his men walk through the bullet-riddled space, they envision the deadly events through flashback, all while Costello cooks them dinner on the bottom floor. While the four sit outside slurping down spaghetti and talking shop, Costello surprises them with a stirring display of technical prowess, taking apart then reassembling a pistol faster than Kwai. Through action, all four become entrenched on equal ground, and To immediately jettisons the group into harm’s way, sidestepping convoluted plot development in the process. Invariably, Chu realizes his diabolical boss Mr. Fung (Simon Yam) is responsible for ordering the hit on Costello’s family, but by this point it’s clear Vengeance isn’t really concerned with the identity of the killers, but in watching the ramifications of one badass group combating another in daring, elaborate action scenes.

The first ballet of bullets unfolds in a public park, where To’s heroes approach their targets with violent anticipation. Just as the slow-motion crescendos and guns are about to be drawn, the families of the villains interrupt the shootout. To subverts expectations, forcing Costello and his crew to watch as the men play with their children and kiss their wives, presenting both their professional and personal existence side by side. When the shooting does start, the action carries more weight, and the dimly lit park turns into landscape of shattering bark, plumes of gun powder, and falling leaves, illuminated then darkened by the moon coming in and out of cloud cover. From here, To doesn’t stop propelling his characters further into the meat grinder, as Costello barely survives a lightening-quick gun battle in a stairway, and Chu, Kwai, and Fat Loc return home to an epic ambush staged on a burnt out apocalyptic prairie, where gigantic wheels of newspaper are used as shields in a shoot out reminiscent of something out of The Road Warrior.

Resting firmly on this relentless pacing, Vengeance becomes obsessed with the lasting effect of vengeance on the traditional machinations of plot and character. This idea comes to a head when Chu asks, “What does revenge mean, when you’ve forgotten everything?” To gives us his answer in the final action sequence, a messy bloodbath through a crowded urban street packed with symbolic objects and clues for Costello’s salvation. While the depth of Costello’s motivation is a bit slight by the closing credits, it’s only because To isn’t interested in putting his character within a context outside of classic genre archetypes. Instead, Vengeance questions the ideology behind this classic cinematic theme, formulating a stylistic foundation that replaces the need for words. A scorned father looking for revenge could exist in any film universe. But an archangel organically guided by the brightness of the moon and intrinsically connected with the iconography of weaponry could only happen in the momentous way-of-the-gun landscape of Johnnie To, an operatic playground where survival is a balancing act between pushing forward and relinquishing one’s fate.