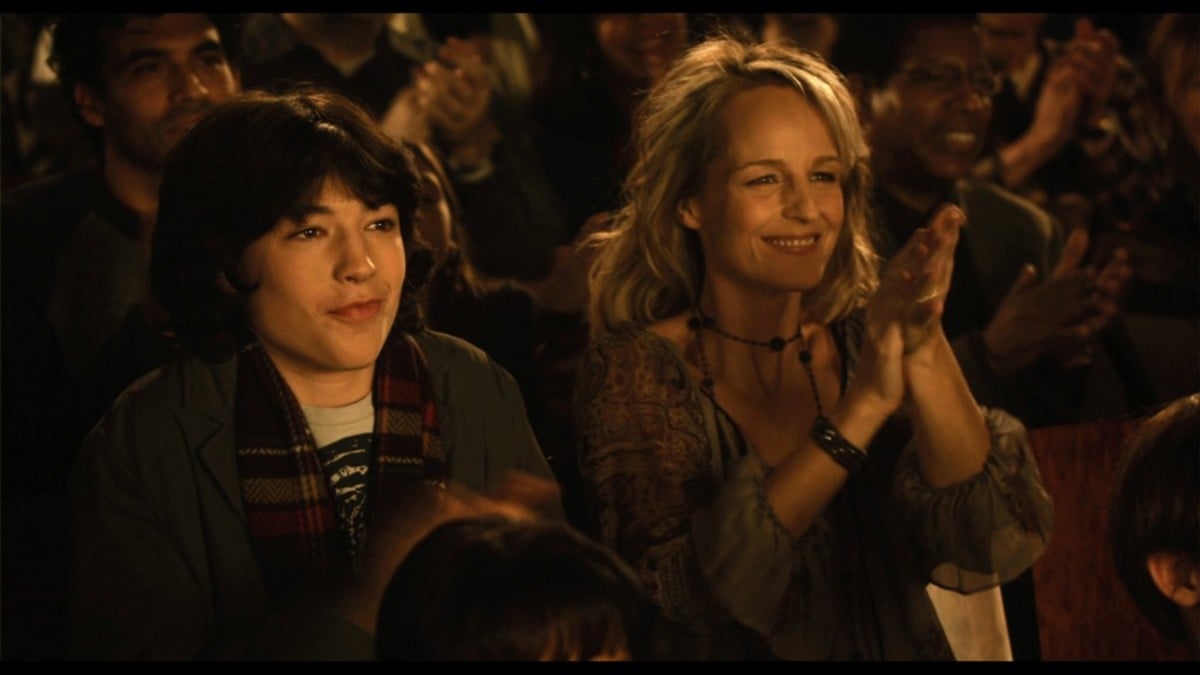 A quaint but inane portrait of a modern-day Big Apple family, Richard Levine’s Every Day begins with Ned (Live Schreiber), a TV writer for a sexually provocative cable show, tucking his youngest son into bed, followed by a montage of breakfast foods being prepared, highlighting Ned’s normal middle-class world. But soon the complexities of Ned’s life are exposed: He’s increasingly uneasy about his high school-aged son Jonah’s (Ezra Miller) burgeoning homosexuality, and he frequently argues with his wife Jeannie (Helen Hunt) about whether Jonah should attend a gay-friendly prom. Also, Jeannie takes in her ailing curmudgeon father, a veteran who drinks too much and dreamily reminisces about his glory days as a drummer in a jazz band. Jonah and Jeannie’s matters are somewhat pushed aside and ignored, though, as Ned becomes overwhelmed by the stressful demands and deadlines of his TV producer boss, played by the eccentric Eddie Izzard. As Ned has difficulty tackling a storyline involving a pill-popping adulterer, he is paired off with his sultry co-worker Robin (Carla Gugino) to spice up the show; the clear, sexual tension between the two writers bubbles over, and a predictable, unfaithful encounter in Robin’s indoor pool—san clothes—occurs.

Levine, a TV writer himself on the sensational, perverse Nip/Tuck, depicts a fairly harmless world in his directorial debut. He tries to craft an earnest film about a family on the brink of falling apart while dealing with life’s unexpected yet common hurtles. However, Levine lacks visual invention as a director, relying on direct, flat camera setups with no dynamic interplay between the lens and his actors, which is surprising since his previous credits working in TV would indicate a far more unconventional storytelling aesthetics.

Schreiber’s uninspired, bored shrugs at the camera and Hunt’s unbearably sincere take on the mom role (she basically replays her As Good As It Gets performance) cannot keep this banal, ordinary concept afloat. The two plainly look awkward as an on-screen couple; their quiet moments in bed hardly suggest a once-shared lust or even a dying flame. But the reliable firecracker Gugino adds spark to her scenes, while the fresh-faced Miller handles the role of the gay son with a stirring modesty. The absurd dream sequences involving Jeannie’s father, played by acting legend Brian Dennehy, are a complete afterthought and distractingly hokey, never gelling with the film as a whole. In his trying attempt at insightful family portraiture, Levine has crafted a mostly humorless tale of a man hitting midlife crises in a predictable, snooze-inducing fashion.

The Tribeca Film Festival runs from April 21—May 2.