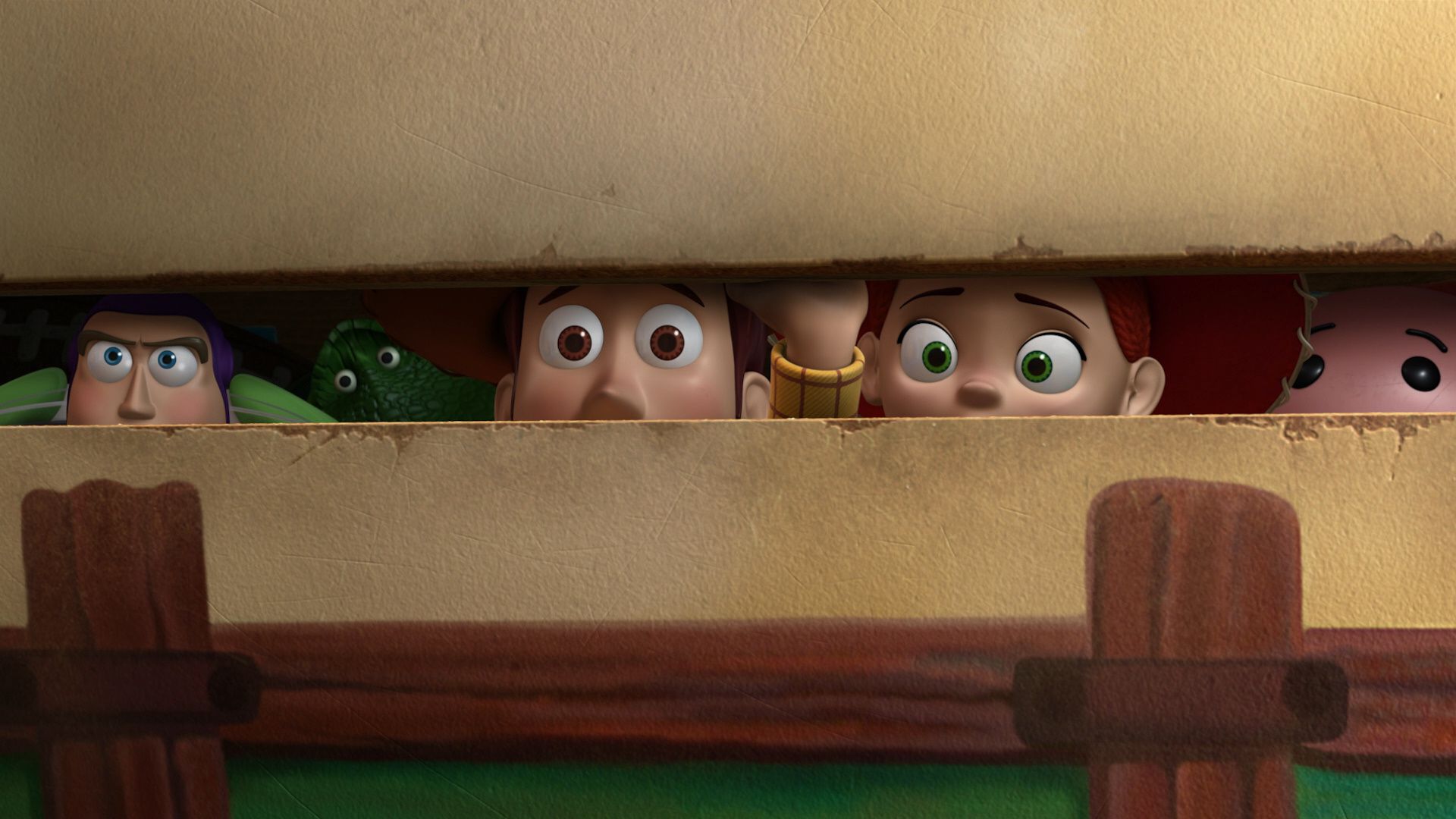 The use of 3D is as superfluous to Toy Story 3 as it was to Up: Both films, marvelously and perceptively drawn, are classically—and classily—told tales of adventure in which good is pitted against evil, but because peril never comes in the shape of a bat or sword swinging at anyone’s face, they don’t exactly benefit from the added dimension. Unlike Day & Night, the cunning short that will precede Toy Story 3 throughout its theatrical run, this third installment of the Toy Story franchise is not a morally charged study in visual perspective, though it’s certainly a moral film and, like its predecessors, obsessed with the way we perceive the toys that once brought us joy—and, for some, still do. Like Up, the film doesn’t lack for poignancy, so in the end, 3D glasses at least prove useful in concealing one’s tears.

The effect of the Toy Story films is practically primal. They appeal to anyone who’s ever cared about a toy—one they outgrew, gave away, or painfully left behind somewhere. These films, with scant manipulation and much visual and comic invention, thrive on giving toys a conscience and imagining what adventures they have when we turn our backs to them. They address the way we emotionally invest in toys, sometimes (as in Toy Story 2, still tops) even throwing in a canny bit of air-tight commentary on consumerism as a bonus for the adults in the room. Such is Pixar’s unique gift that these stories about toys fighting to be played with become, for us, confrontations with our own mortality—from birth to rot and everything in between.

Toy Story 3 picks up with Andy getting ready to go to college, his mother forcing him to decide what to do with Woody, Buzz Lightyear, and his other toys, all unplayed with for many years: to stow them in the attic, donate them to charity, or throw them out with the trash. Rife with much action and misunderstanding, the story takes Woody and the gang from the side of the curb in front of their Elm Street home to a few blocks away inside Sunnyside Daycare, most of them believing that Andy wanted nothing more to do with them. When Mrs. Potato Head’s stray eye—lying too-conveniently beneath Andy’s bed—reveals the truth of his intentions, it’s up to Woody to free his friends from the sinister caste system of the deceptively sunny daycare that becomes their prison.

As social commentary, Toy Story 3 is provocative but vague, even unrealized. Lots-o’-Huggin’ Bear’s torment of Woody’s friends by locking them in with the daycare’s younger and considerably less kind children suggests something of a slave trade. Their nightmare imprisonment is practically a statement on gentrification, as you get a sense of the rich life Lots-o’-Huggin’ and his cronies enjoy being impossible without other, less fortunate toys wasting away in less desirable, impoverished conditions. (There’s no “in” for the undesirables, just one way “out”: the trash.) The scenario is evocative, suggestive of a New York City street with a Whole Foods and expensive luxury rentals on one side and the projects on the other, but the correlation the film makes to real-life urban gentrification ultimately feels tacky because the way justice comes to Sunnyside has no correlative in Harlem.

Better to enjoy Toy Story 3 as a well-executed action yarn, a sort of cartoon version of The Great Escape, even if the film’s admittedly thrilling set pieces—like the opening, which features Woody and Buzz chasing a thieving Mr. and Mrs. Potato Head and trying to save a runaway train filled with hilariously squealing toy trolls—are more referential than satiric, feeling as if they’ve sprung less from the imagination of a young boy than from the minds of grown men with much affection for the collected works of George Lucas, Steven Spielberg, Michael Bay, and Peter Jackson. Your heart pounds as Woody and his friends face what feels like certain death inside an incinerator while your mind goes, “Didn’t I see this already in The Brave Little Toaster?”

Fans of the Toy Story films will bemoan how this third film frequently indulges the snarkiness that completely dictates the world of the inane Shrek movies, most evident in the predictable exchanges between Ken and Barbie (not once, but twice do characters—including Woody—recoil at what is perceived to be Ken’s effeminacy) and the Latin-lothario behavior that grips Buzz when he’s unscrewed and switched to “demo” mode. Time and again, Pixar has proven to be above such frivolity and insensitivity, but the powerhouse of an ending, proof of the company’s emotionally rich ability of telling tales that force us to grapple with our mortal coil, is so humane it disarms our qualms. Tears tell no lies in the end: Toy Story 3 is sketchy, but it’s also profoundly moving.