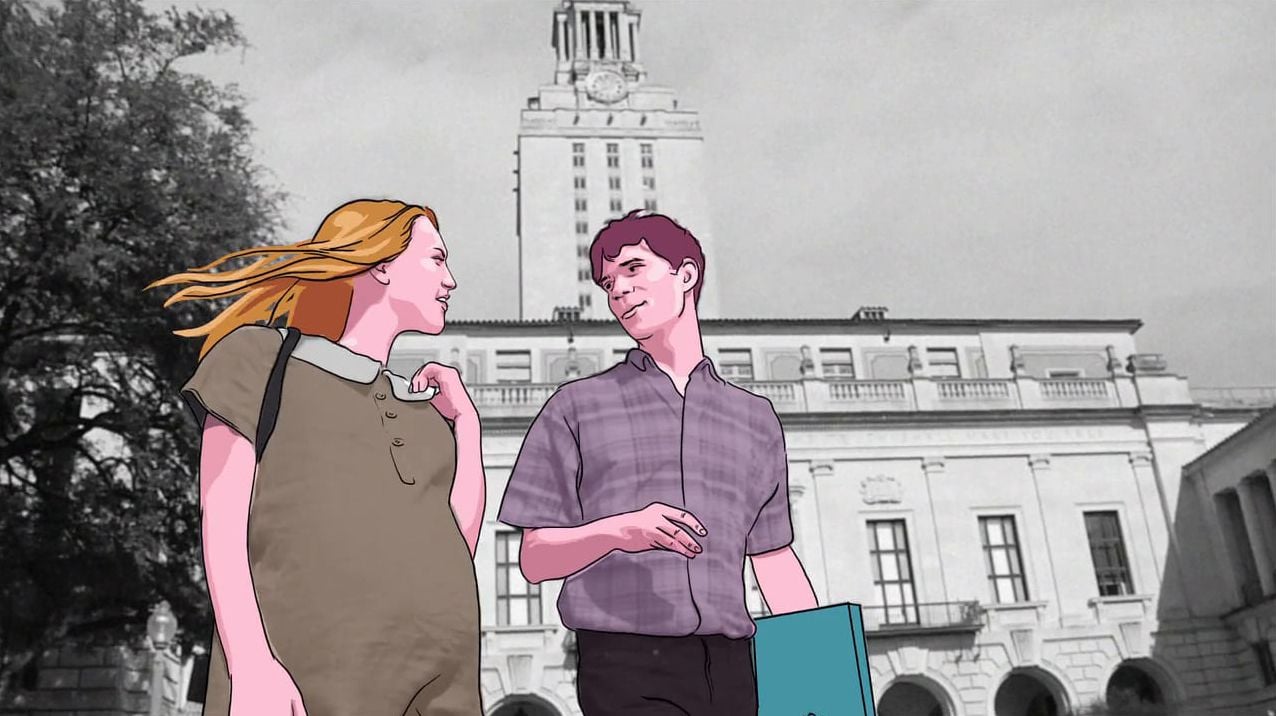 Less than three years after President John F. Kennedy was assassinated in Dallas, a different Texas city was the sight of a mass slaughter caught on camera and reported live over the airwaves. Charles Whitman’s siege on the University of Texas at Austin campus resulted in 18 deaths and dozens more injuries, terrifying a country and beginning a cycle of violence and halting “national conversations” about gun control that has now spanned 50 years. Keith Maitland’s documentary Tower, which recreates the scene of the August 1, 1966 tragedy with a combination of archival footage, survivor interviews, and rotoscopic animation, serves as a historical mile marker of sorts. It’s a tense, emotional rendering of a moment we’ve become too familiar with.

Tower begins right along with Whitman’s first shots, and fully two-thirds of the film dramatizes the 90-minute massacre. In the manner of Brett Morgen’s documentary Chicago 10, or Richard Linklater’s two experiments with rotoscoping, Waking Life and A Scanner Darkly, Maitland’s animation is impressionistic, full of liquid backdrops and bodies that seem to expand or contract with shifts in emotion. The campus setting falls in and out of focus as witnesses and victims grasp the scope of the moment. Claire Wilson, a pregnant teenager, and her boyfriend, Tom Eckman, are the first two victims struck from the sniper’s perch; they stroll through a white backdrop that, when shots ring out, turns blood red as each of them collapse onto the concrete of the campus quad. The pattern repeats with each successive shot (the gunfire arrives in an unnervingly regular rhythm), accompanied by archival shots of smoke pluming out from the campus tower.

The vast majority of Tower’s dialogue, voiced by actors for most of the film, comes from subsequent interviews with victims and bystanders. Maitland has enough material to create an involving tapestry of the day: Some of his subjects are average folks who answer the call to heroism without blinking, while one woman, poignantly, suffers from regrets and feelings of cowardice, having hid throughout the siege. Only a few of Maitland’s aesthetic decisions scan as slightly tin-eared. Many early scenes begin with snippets of the day’s anodyne pop hits and foster some cheap dramatic irony, and the use of voice actors, similarly, is intended to create some crude suspense about who lives and dies. (Once the film’s major players are established, it becomes pretty obvious which characters were fatally wounded.)

Broadly, though, Tower’s treatment is both taut and humane, devoting longer passages to moments frozen in time for the survivors. Wilson offers a history of her brief relationship with Eckman, which Maitland conjures with beautifully florid images of swing sets and butterflies over a tie-dyed backdrop, and one survivor recalls her efforts to keep Wilson conscious by asking mundane questions about her university course load. Here and elsewhere, the film underscores the potential of the lives lost and scarred by the tragedy. At the same time, the filmmaker nods to the brand of live media coverage that will become a repetitive national ceremony, as a local radio reporter offers bulletins on the shootings, which are quickly disseminated throughout the nation. The film’s most startling moment comes in archival footage of a man rushing into the line of fire to rescue Wilson. It’s a bracing act of heroism made all the more striking by the fact that it was caught from three different camera angles, further establishing the massacre as the first truly modern, media-saturated school shooting.

Alternating currents of grief and resignation ripple throughout Tower’s final segment, which catches up with the survivors of the tragedy in the present day and offers a pro forma montage of subsequent massacres defined by their settings: Newtown, Columbine, Virginia Tech, Aurora, and so on. The film barely names the Austin shooter, and is careful not to get into subsequent debates about his mental and physical health, but the immediacy of Maitland’s taut historical reconstruction is dampened by a lack of argumentative thrust in the film’s homestretch. What it delivers instead is delicate and altogether too cautious: gestures toward forgiveness and frustration at the government and the media. Tower conveys the humanity of its subjects, but its ultimate lack of outrage does too little to honor them.