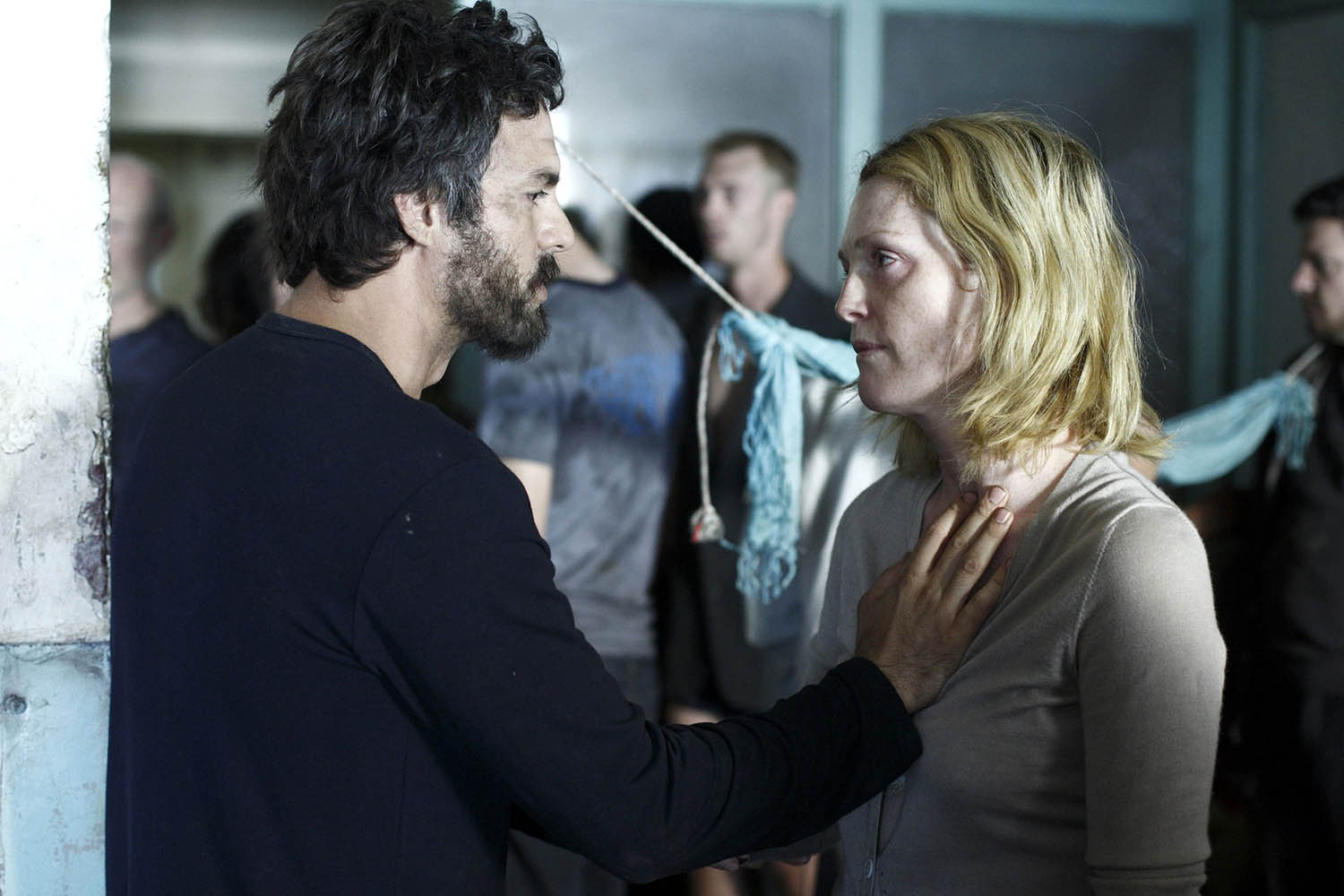 Fernando Meirelles’s Blindness, an adaptation of José Saramago’s acclaimed novel of the same name, feels less like a metaphor for urban isolation than just a zombie movie in which the zombies decided not to show up. Apocalyptic breakdown is triggered by an inexplicable outbreak of blindness, leaving the nameless characters—which include Mark Ruffalo’s infected doctor, Alice Braga’s shades-wearing Mary Magdalene, Danny Glover’s sage old timer, and Julianne Moore’s diligent super-wife, the only one with her sight left intact—to face the extremities of human venality and madness. Somebody describes the condition as “swimming in milk,” and slick-nick Meirelles fucking runs with it: In addition to the promiscuous use of overexposed whites, there are so many deliberately cramped setups and off-center compositions that the whole thing starts to look like the movie Woody Allen’s sightless auteur came up with in Hollywood Ending. Moore by now deserves a bronze statue in her honor, but Saramago’s material here becomes not a stand-in for the human condition, but rather a misbegotten spectacle that, stylistically and thematically, keeps fumbling in the dark and walking nose-first into wall after wall.

As tepid peruke-and-corset period pieces go, Saul Dibbs’s The Duchess, a chronicle of the life of Georgiana the Duchess of Devonshire, goes down with relative ease. Part of it is due to a fleet portrayal of 18th-century British aristos that only sporadically addresses the period’s monarchic realpolitik yet avoids getting too weighted down by its marble floors and golden chandeliers. The most pleasant surprise, however, is that Keira Knightley’s portrayal of the eponymous fashion plate, ballroom wit and covert tragedienne actually deserves some of the buzz it’s been reaping. Physically wrong for the period—her toothpick torso certainly doesn’t come from the 1770s—Knightley is nevertheless alert to her character’s growing understanding of her femininity as an outlet of expression and rebellion, and for the first time the actress’s porcelain cheekbones become flushed with emotion. Marie Antoinette was a far more inventive view of a young woman navigating personal freedom and historical determinism, but Ralph Fiennes as the aloof Duke in search of a heir and Hayley Atwell as Lady Bess Foster are quietly absorbing. A little vulgarity would have worked wonders though.

This may strike some as heresy, but Arnaud Desplechin’s A Christmas Tale, a whirling portrait of a tension-cracked familial get-together, resonated with me in ways Wes Anderson’s beloved The Royal Tenenbaums never did. (A dollhouse figures in one of the storylines, but the emotional barbs keep spilling over instead of being set-designed into submission.) With the matriarch (Catherine Deneuve) stricken with cancer, the fuck-up middle brother (Mathieu Amalric) returning home after being “banished” by the older sister (Anne Consigny), and one of the youngsters still shaken from a suicide attempt, it’s a Yuletide gathering scarcely starving for drama. There are overlapping fights, secrets and reunions, yet despite the hanging pall of mortality, the film’s mood is mainly exhilarating, with Desplechin’s love for the characters compounded by his joyously eclectic filmmaking (woven in are irises, shadow puppetry, split-screens, and—why not?—an out-of-nowhere Vertigo reference). Madly but invigoratingly uneven—if the movie refuses to fuse into a whole (Desplechin seems to be spinning a few too many plates), its emotions still scintillate.

Definition of a Cult Classic: The Fall