When Patrick Troughton’s Father Brennan runs afoul of the devil in The Omen, he seeks refuge in his church and gets impaled by a supernaturally dislodged iron spire. This iconic bit of gruesomeness (one of several in Richard Donner’s glumly earnest yet oddly enduring Exorcist retread) gets replayed in Hot Fuzz, except this time, the victim isn’t neatly perforated but rudely crushed. And then he flails around for a bit with a giant piece of stone where his head, neck and upper body should be, like an Easter Island statue whose features have weathered away. The scene serves as a neat encapsulation of Hot Fuzz’s basic comic strategy: the reupholstering of pop detritus into something even tackier.

The film is an inventory of movie and music references as relentless and explicit as Grindhouse, its city-cop-goes-country plotline, which sees a London policeman transferred to a sleepy hamlet rocked by a series of murders most foul, is merely a pretense for the team behind 2004’s similarly pitched (if more focused) Shaun of the Dead—writer-director Edgar Wright and his cowriter and star, Simon Pegg—to revel in their proudly dubious taste. And while it might sound like heresy to suggest it, Hot Fuzz is quite simply a more enjoyable (and less grueling) experience than Grindhouse. Its trashy affections come unencumbered by sky-scraping pretensions. Put simply, the two films demonstrate the difference between being tipsy on your own cleverness and irretrievably shitfaced.

It’s probably worth mentioning at this point that the unequivocal highlight of Grindhouse was the Wright-helmed trailer for a hypothetical haunted-house flick called Don’t! The relative gentleness of that parody (creaking doorknobs instead of, say, the flayed genitalia in Eli Roth’s subsequent Thanksgiving promo) hints at the satirical thrust of Hot Fuzz. The ads sell the film as a send-up of cop movies, and indeed, the man-love relationship between the aforementioned cop-out-of-water Nick Angel (ace straight man Pegg) and his action-flick aficionado partner Danny Butterman (the majestically boorish Nick Frost), who wind up watching Point Break for pointers, indulges in the usual odd-couple-with-guns hijinks passed down from the genre Holy Grail that is Lethal Weapon (another Richard Donner joint!).

What Wright and Pegg are really goofing on, though, is the prim grimness of so many British movies and TV series. The picture-perfect little town (called “Sandford”) is the sort of locale you’d expect to see in an episode of Inspector Morse or Midsomer Murders; the difference is that the killing here is not left discreetly off-screen. Instead, as in Shaun of the Dead, we get great gobs of gore, although Wright’s fixation on viscera is more in the tradition of Monty Python (or Hammer horror) than Mel Gibson. Most of the victims are stuffy, elocution-conscious twits, purveyors of the same distinctly cross-Atlantic obnoxiousness that John Cleese and company liked to spoof—in other words, disposable stock types that nobody will mourn, a fact that ties into the eventual revelation of who is behind their deaths. Anyone paying attention to the secondary casting will figure this particular twist out well in advance of the prodigious sleuth Angel, but it’s still very, very funny—another well-aimed shot at lofty British mores.

If Hot Fuzz is eventually exhausting, that’s because it’s so densely packed with gags that paying them off takes over two hours. That’s simply too long, and while the film still gets a pass for its sturdy comic craftsmanship, the engaging interplay of its leads and buffet’s worth of juicy supporting turns (Timothy Dalton adds another adroitly self-deprecating cameo to his resume), it’s also telling. It might be argued that the recent monumentalism of the Hollywood action film—exemplified in the 150 minute-plus Bad Boys II, another of the heroes’ instructional videos and easily the worst movie made for over $100 million dollars—is another one of Hot Fuzz’s targets, but it’s more likely that Wright, Pegg et.al, smart lads weaned on leftovers, have more than a little bit of Butterman in them. 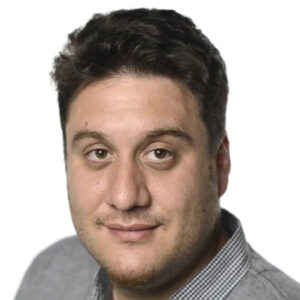 Adam Nayman's is the author of Paul Thomas Anderson: Masterworks and David Fincher: Mind Games. His writing has appeared in The Ringer, CinemaScope, and Reverse Shot.