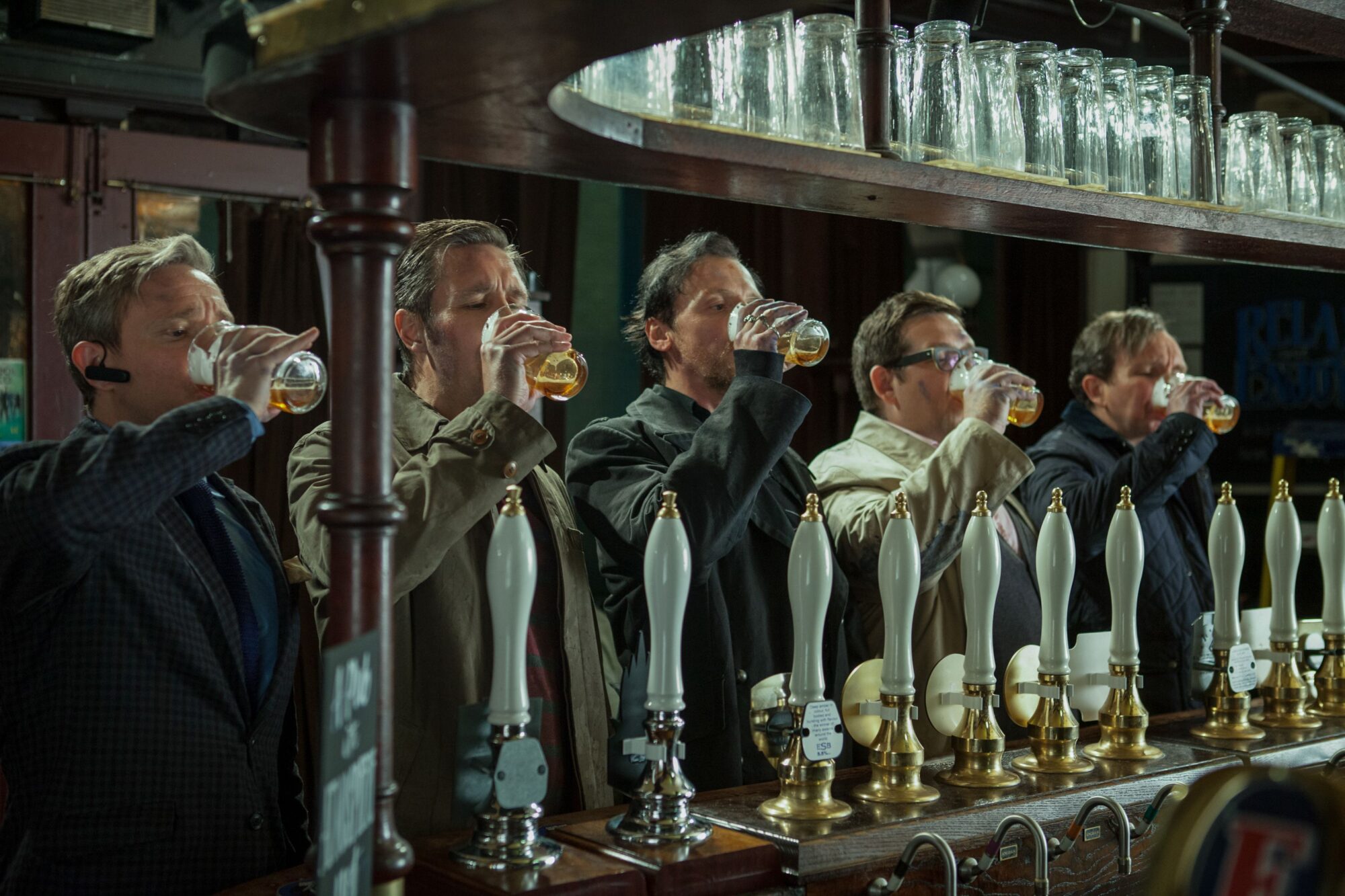 Edgar Wright’s The World’s End is about a disappointment particular to a small-town local’s recrudescence, about both the urge to return to the place of one’s youth and the disillusionment inherent in doing so. It proposes that the worst thing about moving from your small hometown to the big city is the sad realization that your small hometown doesn’t care that you left. You inevitably find yourself, some years later, stirred quite inexplicably by nostalgia, overcome by an encroaching fondness in young adulthood for precisely the things you wanted most desperately to leave behind in adolescence. And so you venture back, expecting that your homecoming will feel somehow triumphant, a vindication of an imagined legacy, as if the entire town had been anticipating your long-awaited return from the very moment you left. But what you find instead is nothing, as you’re greeted not with the grand hurrah of a hero’s welcome, but rather a kind of blankness, the unchanged fixtures of your youth no more glad to see you than a stranger. You’re left to face the truth: that your hometown matters more to you than you ever did to it.

It’s a bitter lesson. But what’s remarkable, and sublime, about The World’s End is that it isn’t content to simply chronicle a formative experience and articulate the attendant pain. Wright understands that the cinema has the capacity not only to recreate lived experience, but to offer constructive and cathartic alternatives to it, working through difficult issues by engaging and then reconfiguring them. The fantasy scenarios that emerge throughout Wright’s work represent attempts to redirect and repurpose frustrations and anxieties that lack a healthy, sustainable outlet in ordinary life. He’s taking real, palpable pain and making something useful and wonderful and fun out of it: The familiar genre conventions he adopts become formal manifestations of the desire common to all of us to see the great big confusing messiness of our lives rendered clear and legible. Life, Wright concedes, is complicated and exhausting and basically just hard; the stuff we deal with every day, from relationships to familial responsibility to even just getting up for work in the morning, makes fending off zombies or cultists or straightforward baddies of any kind seem preferable.

This is hardly a new approach for Wright. In Spaced, the popular but short-lived Channel 4 series he directed for co-writers Jessica Stevenson and longtime collaborator Simon Pegg, the struggle of two twentysomething creatives to claw their way out of dead-end minimum-wage jobs and see their loftier professional ambitions realized was tempered by fleeting retreats into pop-culture daydreams, where reality might look like Murder, She Wrote one moment and Resident Evil 2 the next. Shaun of the Dead took this device a step further: When a breakup violently disrupts the complacent man-child bubble of its hero, zombies arrive to violently disrupt the whole world along with it, reframing one man’s personal efforts to grow and learn the value of responsibility as a more literal question of life and death. Hot Fuzz imagined the traditional conservatism of rural England as an outright conspiracy, one which could be thwarted only with recourse to the tropes of the buddy-action film. And Scott Pilgrim vs. the World, meanwhile, plunged headlong into its youthful reveries, inflecting every gesture with the tenor of a comic book or video game and making even dating a battle royale against evil exes.

The World’s End renews this well-cultivated strategy, here at its most refined. It takes the essence of Wright’s earliest work with Pegg—the perennial but sympathetic loser unable or unwilling to embrace maturity and graduate into adulthood proper—and marries it to the more accomplished style developed over his recent features, which have found him abandoning his former televisual habits in favor of an aesthetic more resolutely cinematic. The result is Wright’s masterpiece.

The film opens in flashback: Gary King (Pegg) regales us in voiceover with the story of the best night of his life, in which he and his four closest high school friends made a go of their small hometown’s infamous 12-pint, 12-pub quest-bender, “the Golden Mile,” tapping out four stops before the end. Wright shoots this sequence in a hazy, sun-bleached approximation of ‘80s-era home movies, scoring it to classic Britpop and lending the proceedings an air of freewheeling exaltation. But he then undermines his style’s own vigorous sweep: As Gary’s monologue reaches its conclusion, a shock cut reveals that he’s been telling this story to his Alcoholics Anonymous circle, whose dead-eyed stares and cough-punctured silence in response recasts his joie de vivre as essentially pathetic.

This sequence sets the tone of much of what’s to come: Gary, unmoored and unchanged since that fated Golden Mile, decides to gather his former gang together for a return home and, he hopes, a return to the glory days of old. And so he assembles his team—Peter (Eddie Marsan), Oliver (Martin Freeman), Steven (Paddy Considine), and Andrew (Nick Frost)—and trucks the decidedly uninterested bunch back out to Newton Haven, the sleepy British hamlet where they grew up. The early scenes of their strained reunion and journey back to town have a deliberately stilted, even unfunny quality, with Gary rattling off jokes that fall flat and generally finding more derision than good times. Past trauma, including one oft-alluded to rift between Gary and Andrew, has long-ago curdled the friendship of the group. Their contempt for Gary has calcified in the years since the group split and went their separate ways, and it lies over every interaction like a thin film that settles on a bowl of tomato soup.

Eventually, of course, the acute pain of lived experience once again finds itself channeled, almost therapeutically, into the conventions of a recognizable genre, this time around the science-fiction fantasy of the sort popularized in the mid-1950s. The central theme—the disenchantment that arises when that nostalgic impulse to return home is followed through—is here projected atop insidious alien invaders, a body-snatching but otherwise benevolent race conspiring to replace an unruly populace with more subservient plastic models. This dimension of the story isn’t introduced until nearly halfway into the film, and the tonal and stylistic pivot required to account for it seems considerably more jarring than, say, the steady and seamless shift from rom-com to zombie film undertaken by Shaun of the Dead.

The reason is that The World’s End, far more than any Wright film before it, is an ordinary drama embellished and in some sense infringed on by genre elements rather than the other way around, which is to say that it’s the Wright film which most confidently and openly grapples with its weighty thematic issues before sublimating them into something supernatural. It’s only once the film has reached its breaking point—when it can no longer support the weight of the drama and the narrative seems on the verge of collapse—that it turns to action and special effects. After rather tortuously ushering his former mates through four of their planned dozen pubs, the group declares that they’ve had more than enough of Gary, whose total lack of maturation nearing 40 stands in sharp contrast to their established careers and family lives. It’s decided that round four will be the last; Gary, crestfallen, slinks off to pee before the leave. It’s there that he encounters the first of what will be many robots to come, and it proves to be the excuse he needs to keep them on their journey and prove himself worthy of their affection.

These elements aren’t meant to lighten or dumb down the proceedings, but to liberate the characters and the audience from a situation which has finally escalated to the point of unbearable. The joke is that the presence of the robots, while obviously terrifying, actually alleviates the pain of the situation: The disappointment you feel when you realize that nobody in your small hometown recognizes or remembers you is explained by the fact that, yes, they’ve all been replaced by robots. The film suggests, quite brilliantly, that this is somehow less scary than the alternative. This is a mature, sophisticated approach to issues of responsibility, friendship, nostalgia, and growing up, not just a lark through sci-fi history, but a commendable attempt to grapple with something real. The situation does indeed turn catastrophic, and nothing past the robot reveal is meant to be taken as dramatically credible. It doesn’t matter. However outlandish the film gets in terms of content, it’s founded on a basic emotional truth, one it articulates beautifully.

Could any other filmmaker working today be expected to helm a $20 million blockbuster sci-fi comedy and make it among the most personal and affecting films of the year? It’s clear now, after four features and all manner of TV work, that Wright belongs not only in the pantheon of comic auteurs, but more specifically to what Dave Kehr described as an “almost antiart tradition, that of the comic filmmaker who, in pursuit of his particular vision, gradually leaves his audience behind as his obsessive explorations take him into ever more dangerous territory.” Kehr observed that “the movies seem to produce one obsessive comic genius every 20 or 30 years: Buster Keaton in the 20s, Frank Tashlin in the 50s, Jacques Tati in the 60s.” If Albert Brooks was that genius for the 1980s, Wright seems an ideal candidate for nomination in the 2010s.

Review: You Will Be My Son