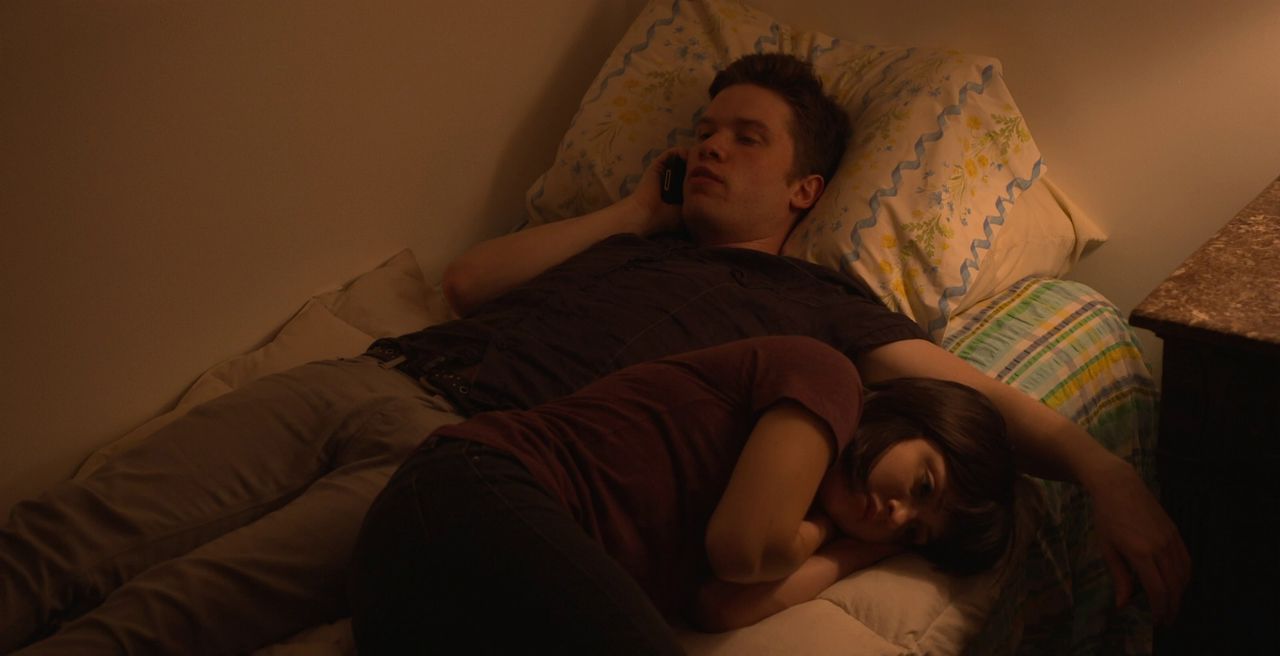 The voiceover narration that courses aphoristically through The Unspeakable Act begins with a rather delicate, if casual, confession: “One of the funny things about being in love with your brother…” A garrulous drama about two intensely, and somewhat deleteriously, intimate siblings of not-quite college age (the narrator, Jackie, played by Tallie Medel, and her brother, Matthew, played Sky Hirschkron), writer-director Dan Sallitt’s fourth feature moves with confident boldness from the incestuous gauntlet its prologue impishly hurls down. Instead of clawing a predictable path toward sublimation or consummation, Sallitt zooms outward to frame Jackie’s obsession with “the I word,” to use her parlance, within the familial and psychological contexts that engendered it.

Both unmentionable (though far from un-mentioned, even between Jackie and Matthew) and un-committable, incest becomes a metaphor for the intimidating specter of unfulfilled adult responsibility that’s grown to elephantine proportions in the siblings’ proverbial rooms; this daring corollary proves surprisingly eloquent, and provides the characters with opportunities to reflect on their swiftly maturing desires that most on-screen teens aren’t granted. Jackie’s attraction to her brother, rather than being flippantly theatrical (i.e., intended solely to shock us), becomes a subconscious attempt to graft the safe immediacy of her childhood relationships with males onto the unstable uncertainty of sexually mature ones. We also eventually understand her paraphiliac urges as a behavioral manifestation of the puzzlement that hangs, a la The Sound and the Fury, from the many, interlaced branches of her family tree. (Her lissome, forever French press-plunging mother is supportive but distant; the clan lives in a practically palatial Brooklyn house, but the progeny often wonder who or what subsidizes their middle class lifestyle.)

Sallitt’s All the Ships at Sea from 2002 was similarly concerned with off-kilter familial dynamics. Depicting a series of increasingly contentious conversations between two aging sisters, both of whom had drifted from the agnosticism of their upbringing into rigidly organized religions, the movie eloquently tests the limits of sororal intimacy and self-knowledge with faith-based debate. By comparison, the brother and sister of The Unspeakable Act are far more transparently insecure and almost implausibly genuine; the bulk of the story concerns Jackie’s suspiciously un-ironic adjustment into a routine of clumsy sex and psychotherapy after her beloved Matthew matriculates at Princeton, making himself unavailable for such curiously familiar tokens of sisterly attention as haircuts and half-naked bathroom encounters. Among the significant attributes that this film and its predecessor share, however, is a textual (nearly novelistic) attitude toward dialogue; the hyper-analytical, honest-to-a-fault first-person voice and traumatically entwined twin sisters of Dorothy Baker’s Cassandra at the Wedding are particularly tempting literary analogues.

Sallitt often insists upon noticeable buffers of silence between blocks of discussion; this staggers the colloquy in his films to the rate at which we experience it in novels, where it’s interspersed with subjectively expository prose. The tic occasionally produces irksomely delayed reactions, but it also encourages us to speculate over the thoughts characters might be having when they aren’t talking and, as a result, the rich, sympathetically contradictory human detail seen in literature can be approximated. Jackie and Matthew are indeed so mindfully and flesh-fully real (and immaculately cast; Medal’s big-eyed, soft-edged body provides a kind of on-going figural commentary) that Sallitt’s supporting players appear painfully generic by comparison. Brief chats the two have with their peers about sex and Don DeLillo feel like wet cracks through which the mildew of lesser teen movies have sprouted.

But whatever density this universe lacks at its periphery it makes up for, oddly, with architecture at its center. The house that Jackie and Matthew inhabit with their mother and younger sister is a mercurial edifice befitting the vertiginous contours of their relationship; wildly haunted by strong yellows, grays, teals, and reds that shift from room to room and from hour to hour, the building’s desultory interior schemata practically brandish their symmetry with Jackie’s aching confusion. And while the denouement thrusts Jackie and Matthew into the realities of capital-M maturity a mite too abruptly, their childhood home dims its previously vibrant hues to damper this “ta-da” note, as though composing a threnody of color to their closed adolescence. Such a delectable narrative flourish wouldn’t be out of place in either Faulkner or Hitchcock.