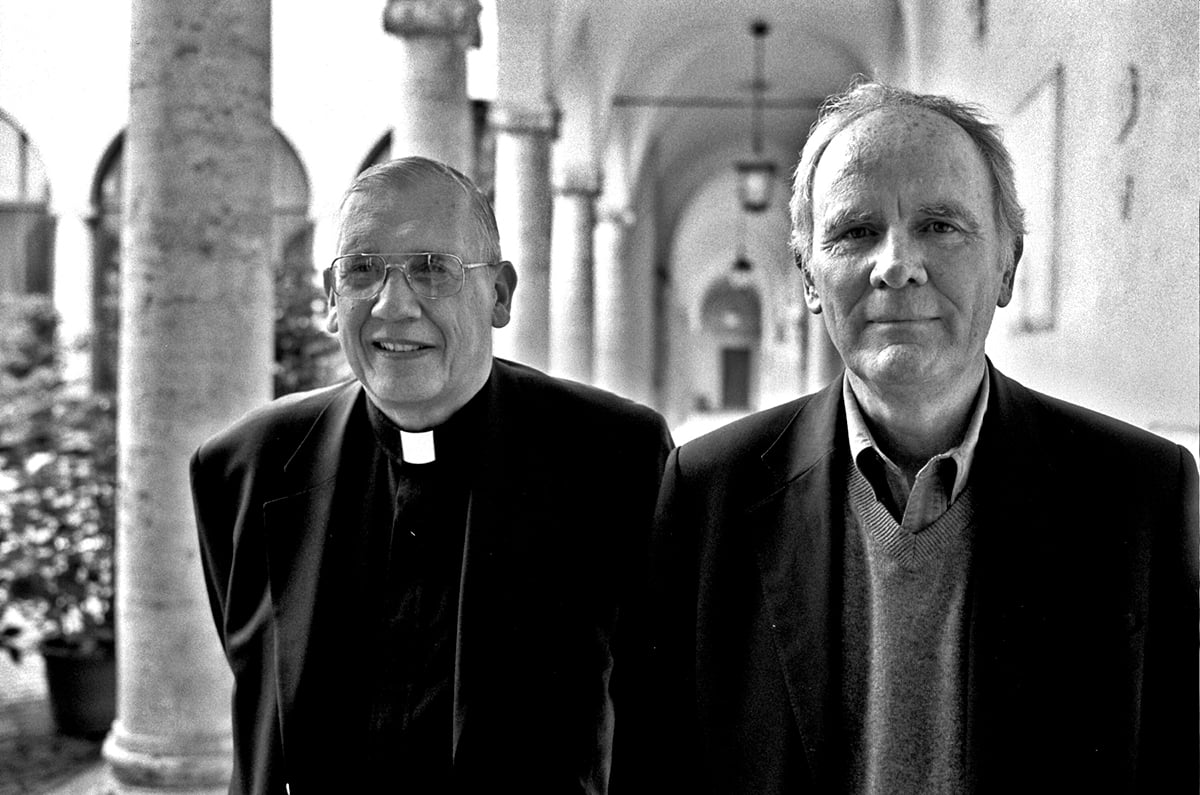 Oren Jacoby’s Constantine’s Sword is an intriguing documentary exploring the “dark side of Christianity” through the spiritual and physical journey of James Carroll, a journalist, award-winning author (his book, Constantine’s Sword: The Church and the Jews: A History, forms the basis of the film) and former Roman-Catholic priest, whose father was a three-star Air Force General responsible for the creation of the OSI. It has the feel of Errol Morris directing The Da Vinci Code; like Morris, Jacoby is more private investigator than filmmaker, probing both the depths of an Auschwitz survivor, a cemetery caretaker’s eyes, and the overwhelming majestic grace of the Vatican with the same penetrating lens.

The film itself is an otherworldly travelogue of sorts, taking us through a Jewish neighborhood in Rome where children kick a ball around an ancient street (an Israeli flag standing at attention nearby), down the Rhine on a boat (spectacular views of medieval castles upon the shore), and to the grassy silence of a disturbingly peaceful Auschwitz (butterflies dancing in the bright sun). The illustrious, white-haired Carroll, now a married father still haunted by a centuries old past, acts as our humble guide, and Jacoby does a remarkable job of connecting a very personal, intimate story to a momentous universal truth. Using archival footage of popes and sweeping Italian vistas, of subway rides through NYC and still family photos, of Renaissance paintings, sculpture, talking heads, animation, and scenes from The Robe and Fosse’s Lenny, Jacoby creates a wondrous visual feast juxtaposed with era-appropriate music and voiceovers (courtesy Liev Schreiber, Natasha Richardson, Phillip Bosco and Eli Wallach) that illuminate the past. With a crew that includes a DP, editor, and composer who all honed their chops working with Albert Maysles, Jacoby’s doc moves as swiftly as the strains of “Knockin’ On Heaven’s Door,” accompanying images of napalm bombing in Vietnam.

But what exactly is this Holy Grail that Carroll is seeking? Nothing less than that exact moment in time when the Cross and the Sword became one—when the Emperor Constantine consolidated his authority by combining war and religion. Constantine was a Christian in a pagan world (because, as one scholar attests, Christianity was the only religion capable of forgiving the Emperor’s plethora of sins) and his ideology resonates right down to President George W. Bush’s “good versus evil,” war on terror “crusade” today. If this seems a bit alarmist, consider that Constantine’s Sword opens with Carroll’s visit to the Air Force Academy in Colorado Springs, whose link to the now-disgraced Ted Haggard’s New Life Church is the focus of a Jewish alumnus’ lawsuit. (Disclosure: I grew up in the only Jewish family in a city an hour south of Colorado Springs. My stepbrother is an Academy graduate and Air Force pilot. Those bronze airplanes seen in the background behind Carroll are my sculptor stepfather’s artwork. And I did crystal meth with Pastor Ted and his rent boy. Well, not that last part, but I always wanted to type that.)

For one of the biggest frustrations for Carroll as a still-practicing Catholic—who claims it was the seminary that taught him to think critically—is the Church’s refusal to come to terms with its warrior nature, causing horrific history to be repeated again and again without the acknowledgment that is a prerequisite for change. This is a man who saw the priesthood as a “step away” from war, the Church being an integral part of the anti-Vietnam peace movement—and perhaps also a step away from his own father, the man responsible for showing those notorious photos to Kennedy during the Cuban Missile Crisis. The notion that Hitler was an anomaly is actually offensive to Carroll in the face of the ample evidence provided by the Crusades and the Inquisition.

It was Crusader mobs that wiped out the Jews along the Rhine. It was a Grand Inquisitor-turned-pope who created the Jewish ghetto in Rome, issuing edicts against their owning property, running for office, practicing religion or marrying non-Jews. It was the Church that was the first foreign power to negotiate a bilateral treaty with Hitler and stood by quietly as German troops rounded up Roman Jews into trucks and deported them. And, perhaps most poignantly, it was the Catholic Church that turned its back on Edith Stein, a German nun and convert from Judaism who wrote to the pope to warn of the rising anti-Semitism under the Nazis. She got no reply and subsequently died at Auschwitz. Not one mention was made of her letter when she was ordained a saint. (Jacoby’s camera captures a nearly miraculous moment: one black-shrouded nun, then more, suddenly filling the frame—all on their way to pay respects at Edith Stein’s grave.)

This is what pains Carroll so, what drives him to understand not just his own Christianity but how a Jewish-Italian artisan family could continue its centuries old tradition of making dishes for each and every pope. As a man whose initials are “J.C.” and whose mother and father bore the names of Mary and Joseph, who from a young age saw crosses everywhere, even in the airplanes in the sky, Carroll takes history very, very personally. “You live your life forwards but understand it backwards,” he says, and also notes that, in hindsight, those ubiquitous crosses always cast shadows—like the one that stands towering in front of the wall at Auschwitz.