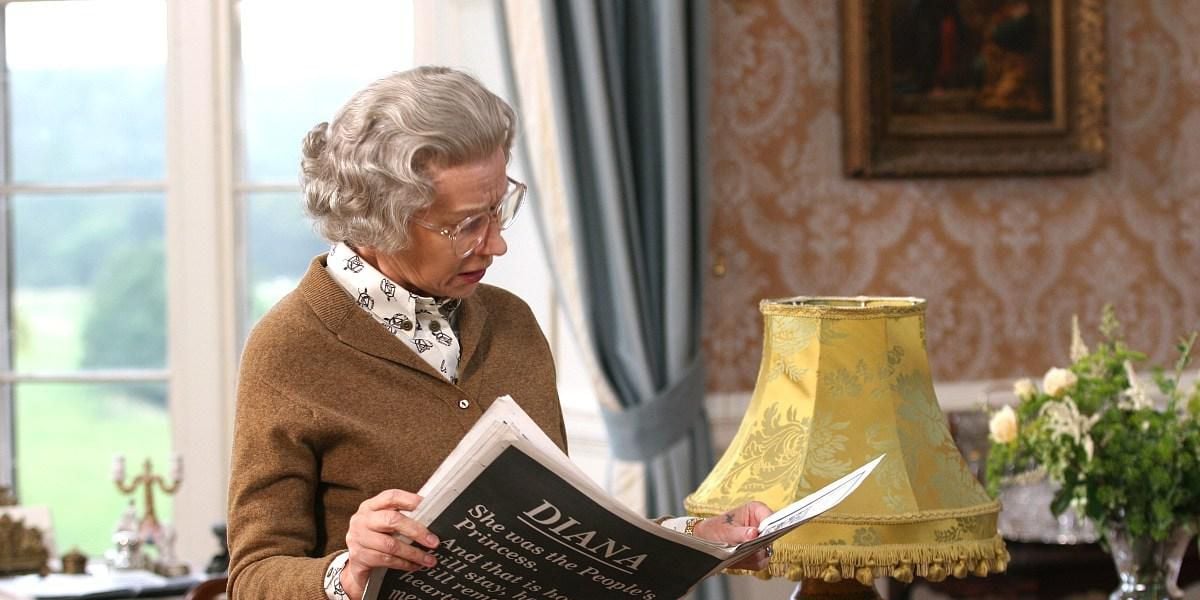 Stephen Frears’s The Queen may explicitly be about Elizabeth II (Helen Mirren), but it’s the dearly departed Diana whose royal presence looms largest in the film, which tracks Elizabeth and Prime Minister Tony Blair’s (Michael Sheen) differing reactions to the national tragedy during the seven days immediately following the death of the Princess of Wales. As scripted by Peter Morgan (also responsible for another new head-of-state docudrama, The Last King of Scotland), Frears’s film fixates itself on the means by which Diana’s sudden passing, when coupled with Blair’s concurrent Labour Party ascension to power on a “modernization” platform, signaled something of a political paradigm shift in Britain, where the Queen’s obstinate refusal to publicly speak about the event—nor allow for a civic funeral, nor fly the throne’s flags at half-mast—made her seem hopelessly out of touch to both the grieving population and the tabloid newspapers that fanned the people’s resentful flames. In this light, it’s Blair who becomes the tale’s noble figure, his insistence (first gentle, then more forceful) that Elizabeth, in a sign of good faith to her citizenry, acknowledge the incident standing as the rational counterpoint to the sovereign’s hard-and-fast adherence to duty, tradition, and avoiding public displays of emotion.

Frears deftly intercuts his dramatized action with newsreel footage of mourners laying flowers on the Queen’s London doorstep and criticizing their absent ruler, who kept herself holed away at her Balmoral countryside retreat. And just as adroitly, the filmmaker succinctly illustrates how the media became both a conduit for bereavement and the favorite whipping post for Diana’s loved ones (her real-life brother blaming the paparazzi for his sister’s demise) and the monarchy (Elizabeth remaining resolute that the furor will die down once the gossip rags drop the story). Despite its stately direction and superb imperial score by Alexandre Desplat, The Queen is itself something of a tabloid-y endeavor, as one of its primary pleasures comes from its (fictionalized) glimpse behind Buckingham Palace’s guarded walls. Unfortunately, the insider portraiture painted is somewhat less than revelatory, in part because Morgan’s script succumbs to cutie-pie jokiness (“What a family!” exclaims Sheen’s Blair, in pure sitcom fashion, about the royals) and broad caricature (specifically James Cromwell’s Prince Philip, who envisions the crowned heads as exiled victims and the gathering crowds as encroaching “Zulus”) while repeatedly hammering home its central old school-versus-new-school themes until Tracy Ullman, in a CNN interview, blatantly summarizes the film’s primary dramatic conflict.

Blair’s pronouncement that Diana was the “People’s Princess” has obvious implications regarding who, exactly, the Queen represents, though rather than simply portraying the national matriarch as a cold, callous, obsolete relic, Mirren imbues her with a defiant sadness that conveys conflicted feelings—relating to her own embattled position, her anger at Diana, and her desire to fulfill her responsibility—which Morgan’s writing frequently treats either glibly or, in the case of a ludicrous stag metaphor, clunkily. That Princess Di remains a TV-glimpsed deity beyond reproach somewhat hinders The Queen’s third-act attempts to explain Elizabeth and company’s reticence as the byproduct of their unpleasant, very personal (read: out of the spotlight) interactions with the exiled Diana. Yet with her pursed lips, a look of steadfast conviction buckling under the strain of mounting doubt and fears of irrelevancy, and her dignified, magisterial comportment, Mirren—at times coming across like a sweet, witty grandmother, at others like a cunning, cagey predator—exudes a potent blend of authoritativeness and stubbornness. She’s intensely, imposingly regal even when the visually competent, narratively unaffecting The Queen proves only pedestrian.