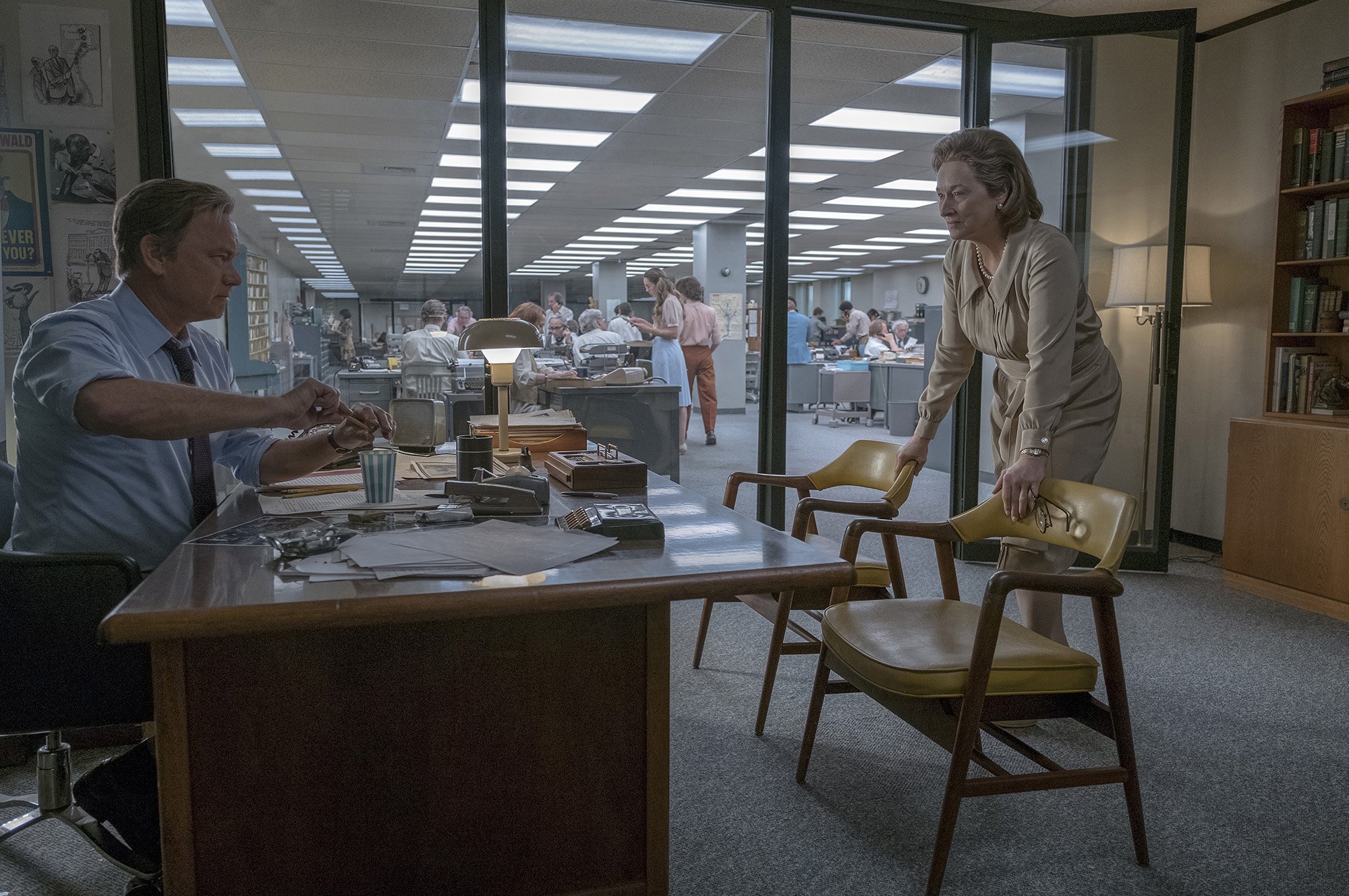 No American film since David Fincher’s Zodiac has exhibited such a love for the way information travels than The Post. Steven Spielberg’s film is an ode to an era when newspapers—with their crotchety reporters and editors, connected and well-heeled owners, democratic values, and broadsheet features—were a literal part of the social fabric, lining parlor couches and billowing through windy city streets. This enthusiasm for the printed page extends to the work behind it: Whenever a big rotary phone sets to ringing, Janusz Kaminski’s camera hurtles toward it, waiting for the news it will bring. The Post rarely hesitates to capture the urgency of the moment, situating the newspaper business at one of its pivotal moments: a showdown with the Nixon administration after Daniel Ellsberg (Matthew Rhys) leaks the Pentagon Papers to the country’s major newspapers.

At the same time, Spielberg’s historical thriller is an admirably nuanced portrait of an industry that is, despite its claims to constitutional righteousness, a business built on money and connections to those in power. (This is very much in keeping with the spirit of Lincoln, the first in the director’s recent trilogy of Capraesque explorations of American values.) Quite a bit of The Post explores these tangles, largely through the perspective of Katharine Graham (Meryl Streep), a scion of The Washington Post’s longtime owners, the Meyer family, who became the paper’s publisher after the 1963 suicide of her husband, Philip. Graham’s paper, edited by the firebrand Ben Bradlee (Tom Hanks), is respected but modest, and her push to expand the paper’s influence by making it a public company comes to a head the very week that Ellsberg has a shoebox full of classified documents detailing decades of presidential deceptions about Vietnam War policy placed on the desk of one of The Washington Post’s assignment reporters.

Josh Singer and Elizabeth Hannah’s screenplay goes deep into the weeds not only of the paper’s IPO but both Graham and Bradlee’s chummy relationships with the major power players of mid-century America and the Vietnam War itself. Former Secretary of Defense Robert McNamara (Bruce Greenwood) pops up at Graham’s frequent dinner parties, and Bradlee’s history with John F. Kennedy is indistinguishable from a friendship. (While Kennedy is described with transparent nostalgia, Nixon is seen only in profile through the windows of the Oval Office, as Spielberg plays snippets of the infamous recordings where the president schemed against his enemies, very much including The Washington Post.) All of this context is valuable, particularly as it establishes Graham’s moral dilemma about whether to move ahead with printing reports of Ellsberg’s leaks: Not only must she imperil her paper’s financial health and draw the ire of a vindictive president, but she must also assent to damning, historically vital critique of her vacation partners and social relations.

The Post is almost queasily at home in the corridors and garden parties of power, even as it attempts to portray Graham’s struggles as the lone woman in boardrooms full of men in dark suits whispering to one another. The film goes to slightly embarrassing lengths to underline the heroism of Graham’s reputation-making decision to publish the Pentagon Papers, and the filmmakers trot out their other blatantly extraneous female characters (Graham’s daughter, Lally, and Bradlee’s wife, Tony, respectively played by Allison Brie and Sarah Paulson) to testify to her bravery. If Spielberg struggles to create a palpable tension from Graham’s travails as a woman struggling to achieve the respect that her position should afford her, it has little to do with Streep’s performance, all stiff cheekbones, barely stifled anxiety, and delightful, at times incredibly suspenseful fluttering diction. What plagues the film is its fevered approach to all of the script’s myriad moral dilemmas, which are missing a critical sense of scale and proportionality.

As much as it’s heartening to see a newspaper thriller that addresses the industry’s fundamental conflicts of interest, The Post tends to shortchange the very issues that make it seem engineered for Oscar glory in the Trump era. It feels only halfheartedly about institutional sexism, and its messaging about the urgency of confronting a corrupt executive branch is similarly relegated to climactic, pro-forma speechifying. The film is hardly immune to the sweaty, rumpled allure of the newsroom, best personified by a lively Hanks and a truly excellent Bob Odenkirk as Ben Bagdikian, the reporter whose sharp instincts yield most of The Post’s genuinely riveting sequences, one of which consists entirely of Bagdikian standing at a bank of pay phones.

Spielberg’s affection for shoe-leather journalism and the printed word is infectious, and it’s designed to be: This is a work whose most compelling puzzle consists of a roomful of reporters trying to piece together thousands of pages of documents that have been submitted to them out of order. Even when the director takes it too far—unceasingly pushing his camera through hallways and into ringing phones, or tilting up to the ceiling and spinning around a morally conflicted Graham—his curiosity is never less than winning, and his direction has rarely felt so energetic, giddy with scenes of overlapping dialogue and deftly orchestrated, impromptu conference calls.

But it’s hard to avoid the sense that some of Spielberg’s fascinations ought to have been reined in here, particularly as he takes on subject matter that encompasses the deaths of hundreds of thousands of Americans and ushered in a domestic schism that seems ever closer to repeating itself by the day. In the only moment where The Post attempts to conjure this milestone era, Graham enters the Plaza Hotel across the street from a gathering of war protesters, panning across a small chanting mob, a group of hippie folk singers, and a man with a bullhorn standing next to a veteran in a wheelchair. It’s a pat, weirdly feeble conjuring of free speech in action, and the film’s lone nod to the democracy that our press is designed to inform and embolden. Such shortcomings speak loudly in a film that’s certainly honest about how power works but is nonetheless steeped in self-congratulation.