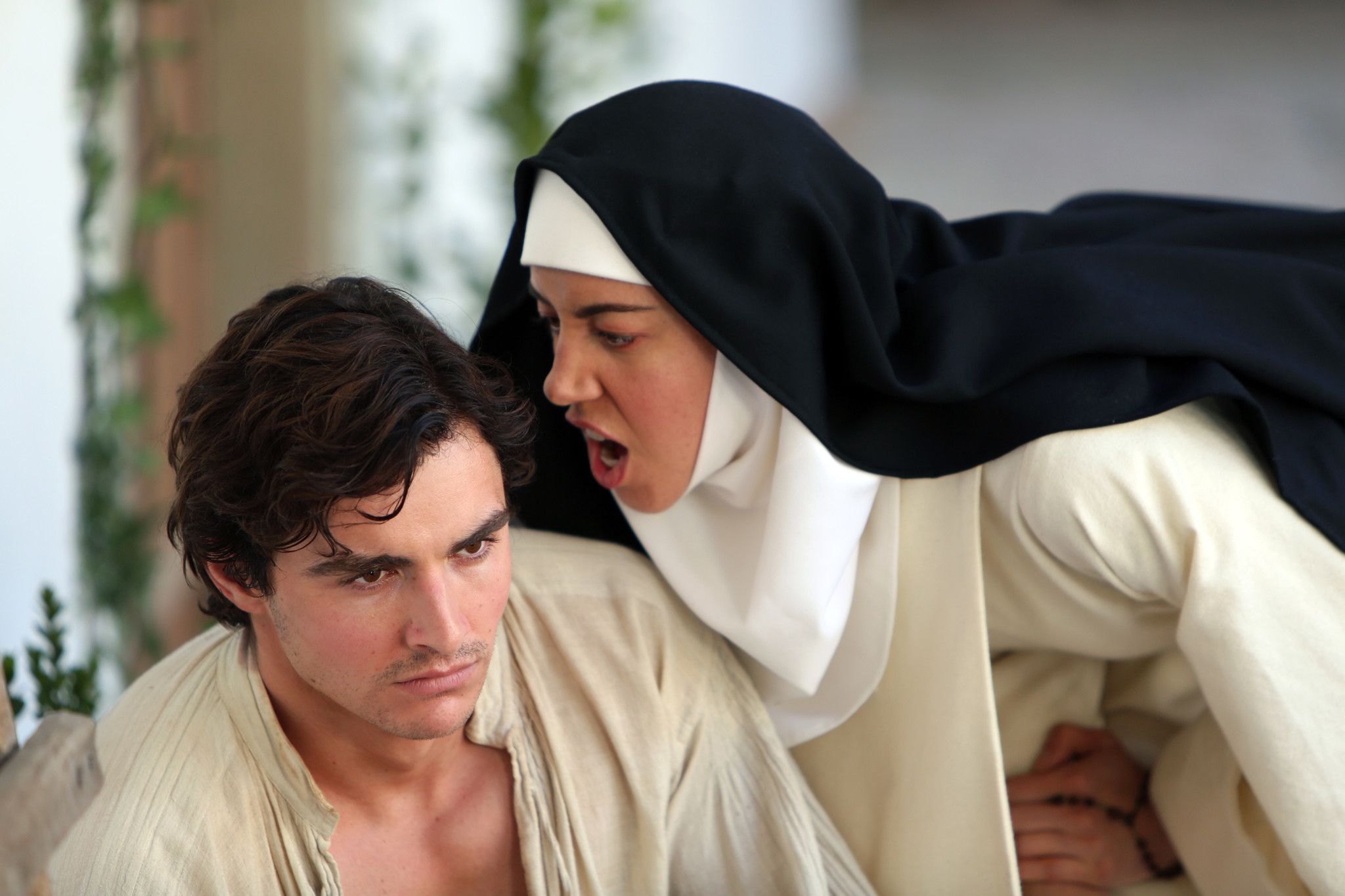 Jeff Baena’s The Little Hours suggests the clever daydreams of a gifted student during a stodgy seminary class. Loosely based on Giovanni Boccaccio’s The Decameron, the film features contemporary American comic actors speaking in present-day English against a spare Italian Middle Ages setting—the sort of purposeful anachronism that’s fueled many of Mel Brooks’s comedies and, more recently, David Gordon Green’s underrated Your Highness. In The Little Hours, a convent is likened to an all-girls college, where the sexually frustrated nuns harass one another and do just enough to maintain the status quo. Their religion plainly and casually means nothing to them, which gives the film its curt edge and piquant emotional textures.

At the center of the narrative is Alessandra (Alison Brie), a young nun who’s afraid that she’ll never find a suitor, about which she speaks to her father, Ilario (Paul Reiser), a significant patron of the convent who hilariously tries to pacify his daughter with the reminder that some women are meant to enjoy the warmth of a home, yes, while others should focus on other gifts, such as Alessandra’s aptitude for embroidery. This sort of punchline is typical of The Little Hours, as the film’s characters often use 21st-century rationalization to soften the cruelty and cluelessness of patriarchy.

Yet, the primary patriarch is as much of a misfit as the nuns. Father Tommasso (John C. Reilly) is a drunk who loses Alessandra’s embroidery in the river and comes upon Massetto (Dave Franco), who’s on the run from another hapless male in power, Lord Bruno (Nick Offerman), a petty tyrant who bores everyone in his periphery with his paranoid rants about Florentine and his favorite methods of medieval torture. Tommasso takes Massetto to the convent, disguising him as a deaf mute and installing him as the new handyman, kicking the nuns into carnal overdrive in the process, particularly Alessandra as well as Genevra (Kate Micucci) and Fernanda (Aubrey Plaza).

A minimalist yet robust sex farce, The Little Hours abounds in the sort of absurdities that depend on the precision of the performances and on the electromagnetism of the actors themselves to succeed. It’s quite funny when Lord Bruno recaptures Massetto late in the film and thanks him, claiming that Massetto has given Bruno justification to seal his own wife, Francesca (Lauren Weedman), up in a wall with a boar and a dog. Such a punchline depends on how Offerman describes outrageous (and true-to-life) cruelty in a tenor that would be more reasonably associated with the disingenuous gratitude that one might express for receiving, say, a recommendation for a yoga class.

Similarly, the expressions that surface on Tommasso’s face when Massetto describes the sodomies he’s enjoyed, elaborating on how Francesca variously serviced his “sex,” are indelible Reilly pantomimes that merge befuddlement and hypocrisy with loneliness and want. The entire cast informs their non sequiturs with such soulfulness, allowing the film to largely sustain its one-joke premise. Brie, Micucci, and Plaza play the sexual hunger of their characters almost entirely straight, and Baena lingers on their bodies as they comically ravage Massetto, emphasizing the rapt and exhilarating unexpectedness of sex that’s allowed to blossom in a sexless setting.

For all its hip ludicrousness, The Little Hours has a point: to almost earnestly riff on how atheism has taken hold of 21st-century America, by rooting our nation’s mores in a time of great austerity, sexism, classism, and persecution. The strict, shame-inducing dogma of traditional Catholicism, in this case, throws life off balance, which is encapsulated in the film by Bishop Bartolomeo (Fred Armisen), who amusingly chastises a nun for “loving the world” and “living in pleasure.” In The Little Hours, the contrivance of modern dialogue in a period setting comes to mirror the unnaturalness of organized religion itself. In a poignant ending, the convent’s citizens shed these pretenses and begin their search for a new way, exchanging handed-down bureaucracy for the immediacy of less-intermediated community.