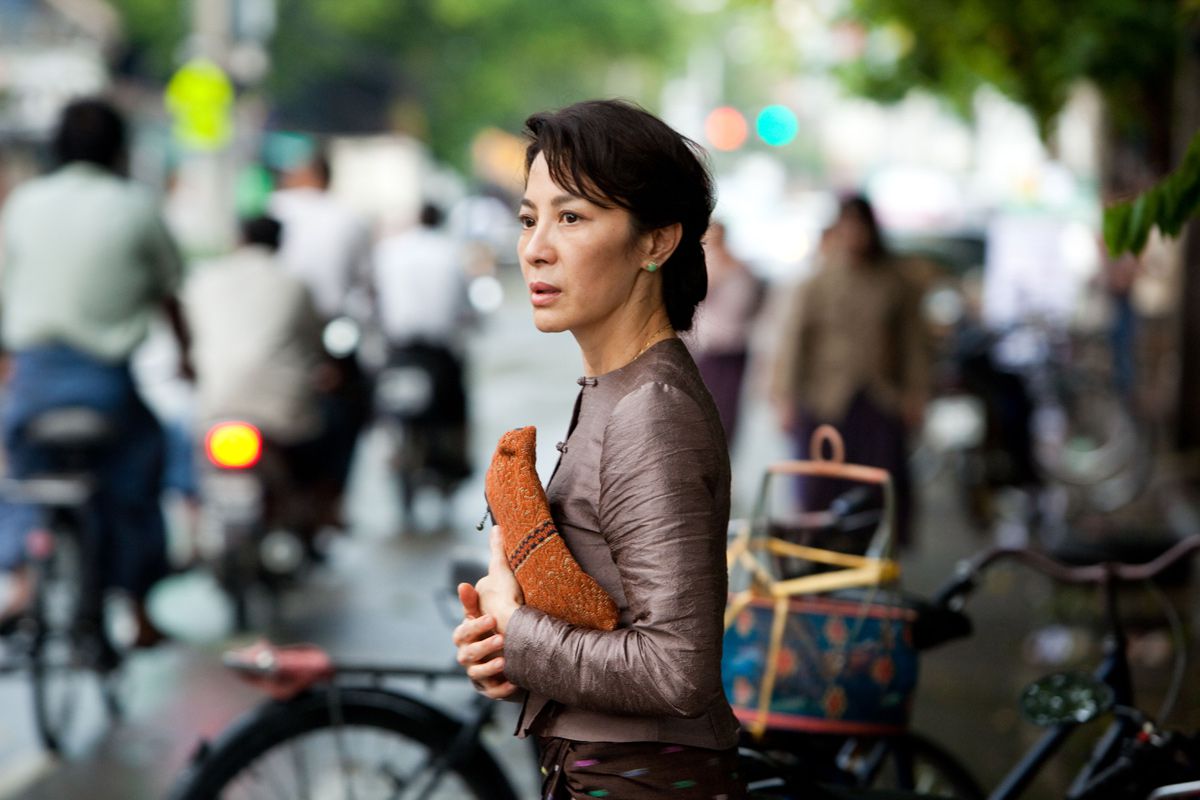 One tends to be increasingly wary of biopics these days, something most readily attributable in recent years to the Weinstein Company’s steady output of Oscar-ready fluff, such as The King’s Speech and My Week with Marilyn. An unfortunate side effect of these forgettable films’ inevitable backlashes from suspicious viewers is that other, lower-profile efforts like The Lady appear to be guilty by association. Which isn’t to suggest that Luc Besson’s portrait of Aung San Suu Kyi, the Burmese politician and opposition leader who’s been a national figure in her native country more or less since birth, is perfect. It isn’t. But where one expects it to feel needlessly maudlin or bogged down in self-importance, it repeatedly reveals itself as measured and restrained, sometimes to a fault. “Tell me a story,” a young Suu Kyi asks her father in the opening scene; we’re then treated to a series of images highlighting the days when Burma was a “golden land” of tigers, elephants, and jewels as the man waxes poetic about this storied past. Anyone familiar with the Southeast Asian country’s last half-century knows that the beasts most often associated with it these days are those in power, hence this movie’s existence.

Minutes later, Suu Kyi’s father—who happens to be Aung San, a revolutionary, political leader, and vaunted figure in Burma to this day—is brutally assassinated along with a roomful of his supporters. The moment before he’s shot in the head at point-blank range, a look of serenity washes over San’s face as he quietly closes his eyes. Calm in the face of turmoil comes to be the mood most often cultivated by The Lady, and as such it manages to be surprisingly low-key throughout. As Suu Kyi in the narrative’s main timeframe (roughly 1988-98), Michelle Yeoh very much lives up to the film’s title: Flowers in her hair, Suu Kyi carries herself with a quiet elegance that’s in stark contrast to the oppressive regime she aims to replace. This is a humanist with an eye toward the future surrounded by, and subject to, regressive authoritarians with no end goal beyond perpetuating their own positions of power. What they actually do with it other than topple anyone who opposes them is inconsequential, beside the point. And though Suu Kyi describes herself as quick-tempered, impatient, and stubborn, what flaws she may actually possess are more or less absent here: Yeoh’s evocation of the “steel orchid” is never presented as anything less than an embodiment of the eminently admirable figure that woman genuinely seems to be.

That said, this is less a hagiography and more a portrait of a woman who, between her maternal air and quiet demeanor, is in most regards quite ordinary, which isn’t intended as a criticism. If Suu Kyi seems a saint, it’s largely in comparison to the military junta she spends the entirety of the film humbly opposing. For their part, the men of the Tatmadaw are portrayed as chauvinist brutes without even a skewed ideology backing their violence—and, in fairness, there’s more than a little evidence to suggest they’re not much more. All of which is a long of saying that The Lady doesn’t see its protagonist through rose-tinted glasses so much as it takes a more open stance than Suu Kyi herself has ever been able to, which may be seen more as a necessary evil than as an outright flaw.

Politics is always personal here, nowhere more so than in the Sophie’s Choice with which Suu Kyi is presented late in the film: her country or her family. This ultimatum applies most directly to her ailing husband Michael Aris (David Thewlis), but more generally to the constant difficulty of traveling between Burma and her adopted home of England. “A spirit is even more dangerous if it becomes a ghost,” the supernaturally inclined general pulling the strings against her is advised by a seer, leading him to spare Suu Kyi’s life solely to avoid her becoming a martyr in the same way her father has. Against this kind of logic, it’s a wonder she doesn’t pack her bags and take the next flight back to Oxford.

But despite everything that Suu Kyi has done and experienced (win 59% of the popular vote in a national election, get placed under house arrest for 15 years, and be awarded the Nobel Peace Prize), the often action-minded Besson never actually crafts much drama out of her story. The goings-on can rarely be called truly compelling, even if they’re almost always generally pleasant. Thierry Arbogast’s colorful cinematography is pleasing to look at and Yeoh radiates as much elegance as ever, but this doesn’t always amount to as much as it could. In a way this is less a flaw and more an accurate depiction of Suu Kyi’s struggles: Besson focuses a great deal of attention on the sort of bureaucratic red tape that would make Kafka blush (rejected visas, chartered flights, phone lines that are either tapped or cut altogether), constantly reminding us of the arduousness of even the simplest task under a backward regime. It eventually reaches the point where the film’s rare moment of grandiosity actually comes as a relief to both viewer and subject; noble intentions and political know-how aside, this is an immensely stifled woman. Her efforts are constantly stymied, so much so that we’re asked to see her well of determination as an end unto itself. Which is to say that, if The Lady never quite blossoms in the way one might hope, it’s largely because its subject has never been allowed to either.