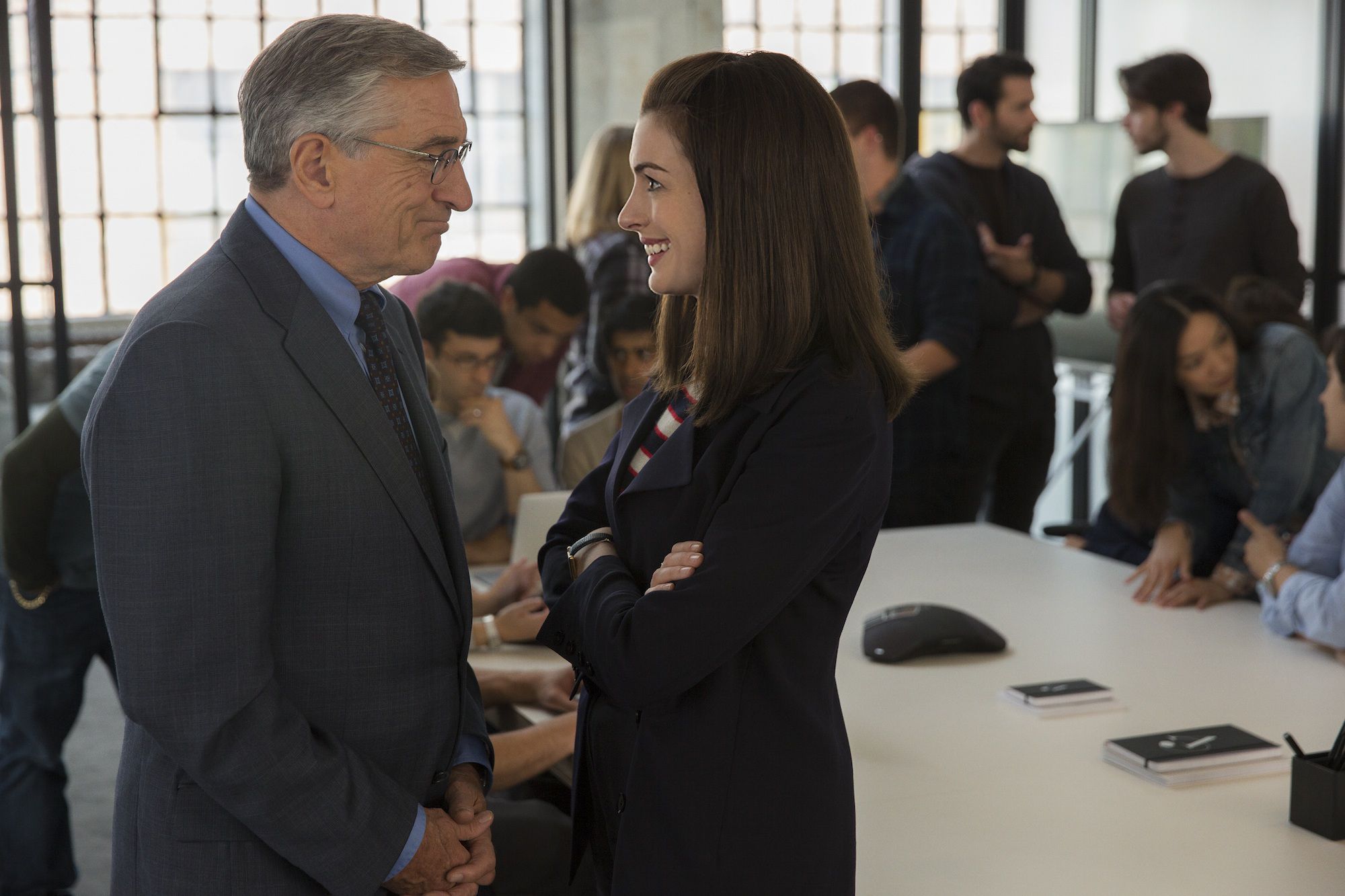 That there’s just something about the way Anne Hathaway carries herself that drives people up the wall is by now well documented. According to an informal poll conducted by yours truly, the Oscar-winning actress is about as excruciating to many women as the word “moist.” So let’s give a little credit to writer-director-personal-shopper Nancy Myers: Her interminable new film, The Intern, which gives Hathaway just enough rope, may manage the seemingly impossible feat of taking callous young professionals to task even as it appears to have it in for geriatric cougars on the prowl. It boasts what may be the least connected title character since Godot. But it also includes a scene that may be the single most incisive auto-critique of Hathaway’s blackened reputation among better-than-thou moviegoers everywhere.

At the midway point of the film, 70-year-old Ben Whittaker (Robert De Niro) comes upon a group of affluent young mothers in a playground. Ben is humbly performing one of his duties as the “senior intern” for Jules Ostin (Hathaway), the founder of an online clothing boutique with such an upstanding reputation it’s become a stratospheric overnight success. Because Jules’s endeavors are eating up so much of her time that she claims she hasn’t slept in two years, Ben offers to take her young daughter to the birthday party of a classmate while Jules attends one of her 60-some meetings scheduled for that afternoon.

Having spotted the congregation of Judge Judys, Hollys, and Brookes off to the side, Ben introduces himself. They respond with a backhanded observation about Jules’s absence, and Ben immediately launches into a passive-aggressive tirade about how proud they must be that one of their implicitly useless brood has managed to accomplish something so impressive as Jules’s faultless e-retail paradise (an Anthropologie-lite concept even Jules herself downplays: “It didn’t take a genius to realize that a woman with a laptop and a glass of wine is a winning combination”). The other mothers blink Ben’s defense away, but their cannibalistic social practices have been laid bare.

When Hathaway isn’t given a part worthy of her talents, her humble homecoming-queen act strikes most as the ultimate in disingenuousness; the world is her party and she’ll cry if she wants to. Meyers isn’t a gifted director, and her meandering scripts mark her as an even less talented writer, but she’s unquestionably committed to her auteurist signature of giving her female protagonists their cake and letting them eat it too, even if she fails to give moviegoers what they want. And so it’s an either lucky or fatal stroke of serendipity that The Intern pits Meyers’s upper-middle-class benevolence against Hathaway’s latent Veruca Salt syndrome.

While De Niro is busy trying to blend into the wallpaper rather than delve into a vacuous, saintly role even Robin Williams would’ve had trouble enlivening, Meyers sets up a psychological Monster Dash for Jules to surmount: terse phone calls with an emotionally withdrawn mother, insistence from her preened CFO that Jules needs to hand over the reins of her dream project to one of the misogynist CEO candidates he vetted for her, a househusband who may secretly resent cashing in his own economic potential for hers. The extent to which Meyers stacks the decks to tip her audience’s sympathies toward their mortal enemy, indeed hoping that they will take positive thinspiration from her coronation, is almost compelling and quixotic enough to make the film’s two hours feel like merely six or seven.