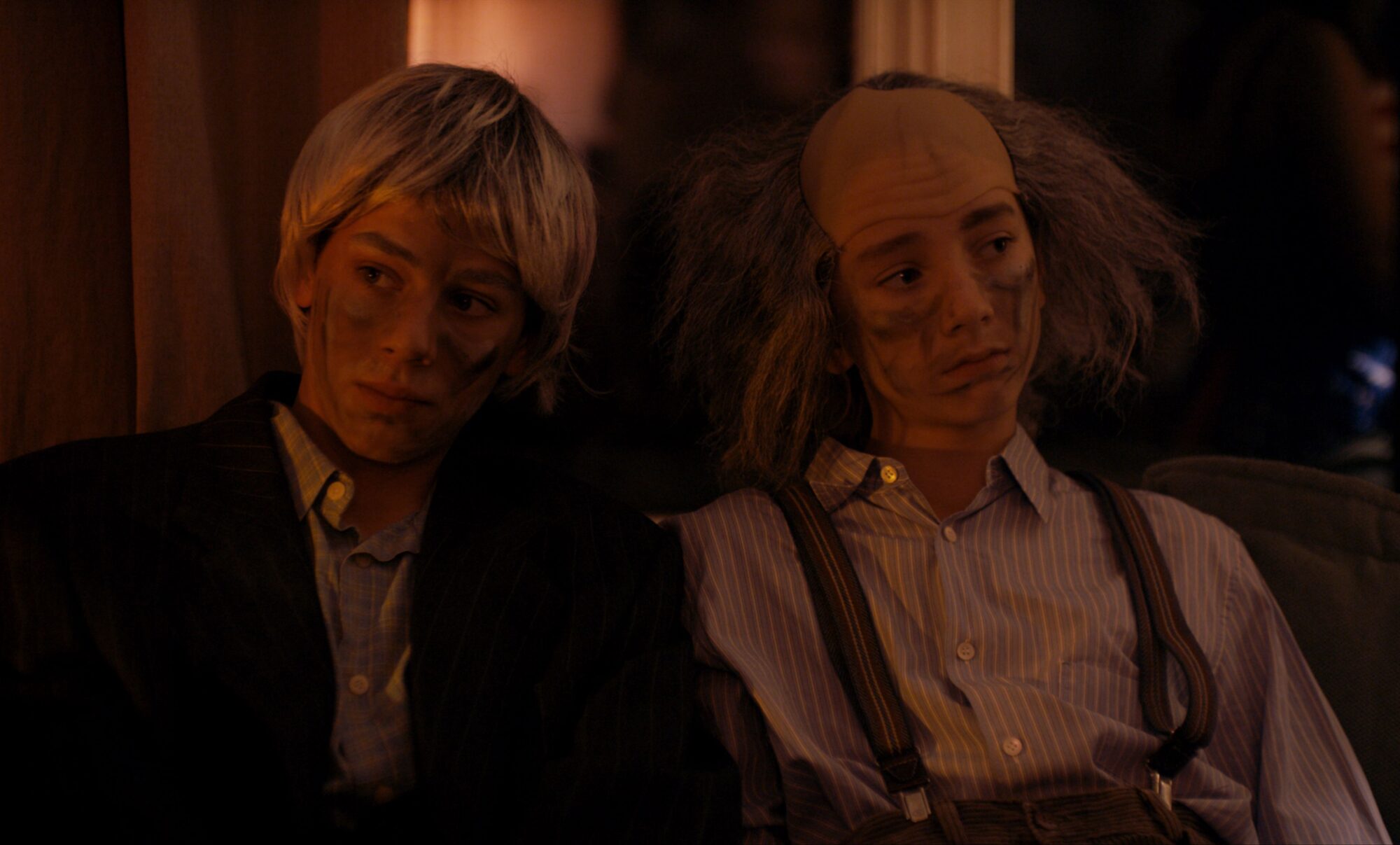 Michel Gondry’s Microbe and Gasoline is, first, a textural experience, an evocation of the prickly, confusing crawlspace between adolescence and adulthood through a fixation on the shape and surface of things. Its images abound in astonishingly tactile qualities and pointed associations on which the story’s subtle epiphanies are built. When Daniel (Ange Dargent), alias Microbe, wakes up at six in the morning to piss, the menstrual blood that sits in the toilet bowl connects to a tea bag’s release of brown liquid. The teacup is understood as a universe, a container of life, and one gleans that this boy’s gift for drawing, evinced by the cartoon pornography to which he half-heartedly whacks off to, arises from the pleasures and horrors he alternately sees swirling within it. Poor Microbe fears he has no sperm in his system, and among the film’s many astonishments is that the story doesn’t culminate in a release of tension, as such defying expectation.

This love letter to friendship adopts a documentary-like observational mode. It assembles the big picture of Microbe’s rapport with Théo (Théophile Baquet), the new kid at school, through an accumulation of sweet and sour details about their lives. Through a hole in his bedroom wall, Microbe, referred to as such because of his small stature, surreptitiously lobs spitballs at his older brother, and from whom he steals a jacket for his new friend. In one of many running gags, he’s confused for a girl because of his long hair—even by a teacher who should know better. Théo, a wee mechanic referred to as Gasoline because of his smell, makes dinner every night for a mother who regards him as a nuisance—and for reasons, at least to us, unknown. The two, then, band together as if to cope with all of the world’s quiet indignities.

Microbe and Gasoline is, too, an allegorical depiction of the awkwardness of the teenage experience. Together, Daniel and Théo decide to run away from home, but when they’re refused a license to drive their makeshift car, they transform it into a house on wheels, under the soon-to-be-proven-correct assumption that cops will be too delighted by its side-of-the-road quirkiness to care about ticketing it. The house-car takes the friends all over France, on a daisy chain of adventures marked by elation and disappointment in equal measure, from botched haircuts to run-ins with eccentric, possibly dangerous types. The film’s wonder is a result of its melding of conflicting sensations. An encounter with a dentist in the country is, first, funny for the way Daniel is once again confused for being a girl and, second, poignant for how the dentist’s desire to feed and house the boys stems from the emptiness he feels in the wake of his children also having left the roost.

Daniel and Théo’s house-car is also, and finally, a metaphor for Gondry’s artistic process. Yes, it reveals the filmmaker’s nostalgia for his youth, his understanding for the sometimes sheer inscrutability of growing up, how a brother can kick you in the shins one day only to help you on your life’s journey the next, but it also represents his desire to make something a little more outside his, well, wheelhouse. The characters here are prone, sometimes cloyingly, sometimes amusingly, to annotating the essence of a scene’s meaning (“friendship is the death of love,” “alcohol is the death of dignity,” and so forth), and in ways that are quintessentially French, but without exuding the heady gamesmanship of, say, The Science of Sleep. But like The We and the I, Microbe and Gasoline is enervating for both relishing whimsy and looking behind it to absorb the yearnings of youth and its attendant complications in all their nakedness.