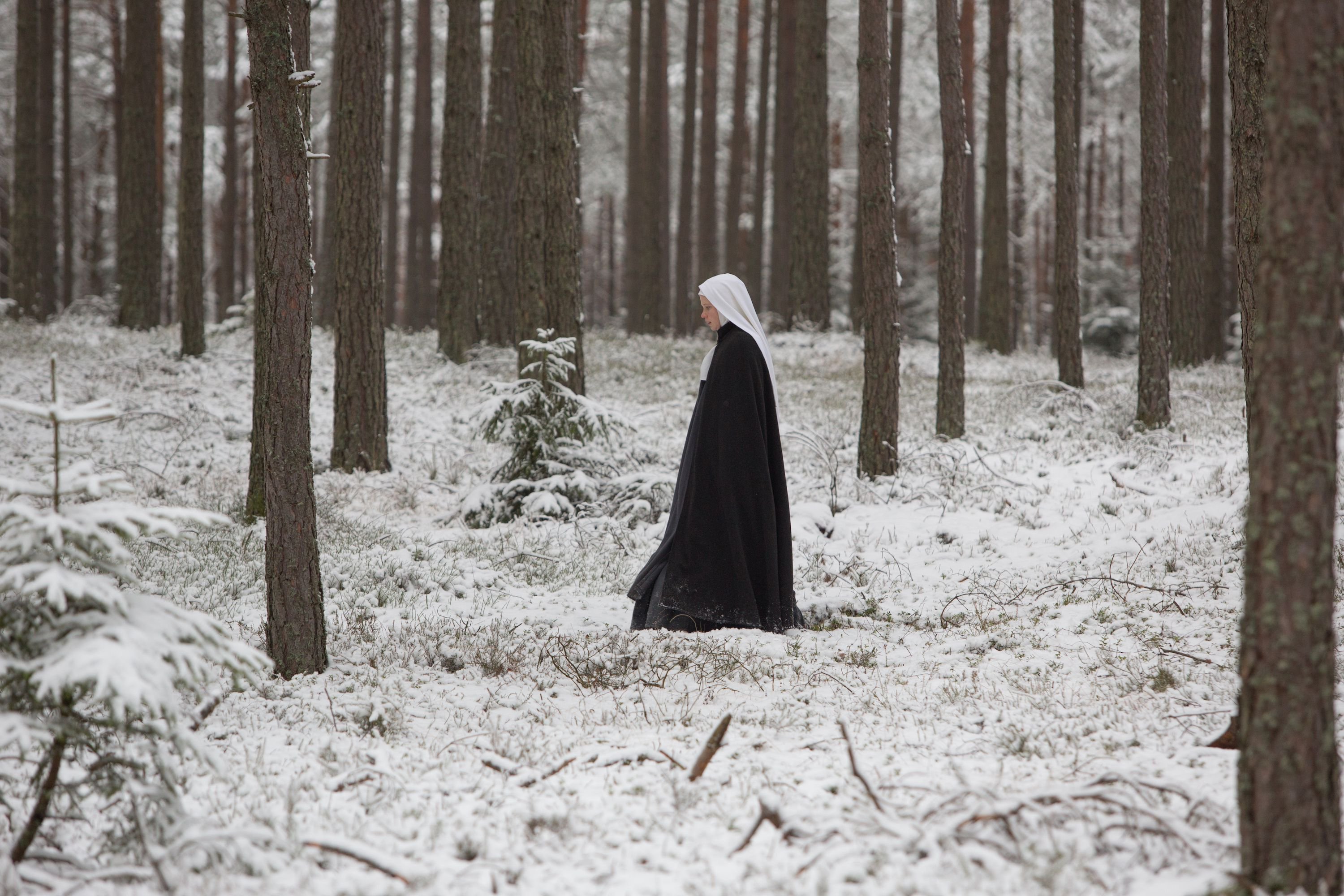 It was only three years ago that Ida diligently aestheticized the blackness of religious habits against the whiteness of Polish snow, so it’s hard not to expect Anne Fontaine’s The Innocents, also centered around nuns in war-ravaged Poland, to abide by the pathos we associate with Pawel Pawlikowski’s film. While Fontaine does take advantage of the ways that the costuming of nuns lends itself to striking contrasts against landscape vistas, she’s more interested in retrieving a historical account than pleasing the eye or tugging at our heartstrings. Fontaine’s film is all gloom and doom from beginning to end not because of the horrors a single character we identify with suffers, but because of the scale of horror impinged upon an entire community.

It’s 1945 Warsaw and Mathilde (Lou de Laâge), a French doctor’s assistant for the Red Cross, is asked to help a sick nun at a convent. When Mathilde arrives there, she realizes that the entire order of sisters is hiding late-term pregnancies under their habits. Picturing this premise could be comical if the pregnancies were the product of naughty nuns breaking their vows of celibacy, but they’re due to a series of gang rapes committed by occupying Russians. The terrible events lead some of the sisters to doubt their faith.

Some welcome Mathilde’s help, while others refuse it in the name of dogma, as being touched is a sin, even if it means letting syphilis go untreated. One scene reveals the severity of the convent’s repression as Mathilde gives a nun what seems to be her first medical examination; it may also be the first time that another adult has touched her body without violence. As Mathilde places her hand on the nun’s pregnant belly, the nun explodes in laughter, as if overwhelmed by the excitation—a short-lived burst of bliss, surely, as the nun quickly recoils into muteness once she realizes another nun is watching her.

Even if Mathilde plays the heroine in The Innocents, disrespecting the Red Cross’s rules and putting her life at risk to assist the nuns, we never spend enough time with each character in order to care about them as individuals. In fact, it’s difficult at times to tell the nuns apart. Which helps make the film something of an allegory for women’s condition more generally, in times of war or peace. Their kinship—the discovered link between the pious ones and the sexually liberated nurse—is in the fact that despite their different beliefs, behaviors, and costumes, they’re never safe.

The proof of this bond emerges in a sequence when a Soviet soldier attacks Mathilde while his colleagues egg him on and begin lining up to do the same. It’s a reminder that the making of a woman isn’t in the materiality of their bodies, but in the ways in which their bodies are repetitively made to not matter. In The Innocents, war seems to be something of an excuse for men to band together so they can all vow to annihilate the bodies of women as if to disavow the fact that their own will be decimated sooner or later as well.