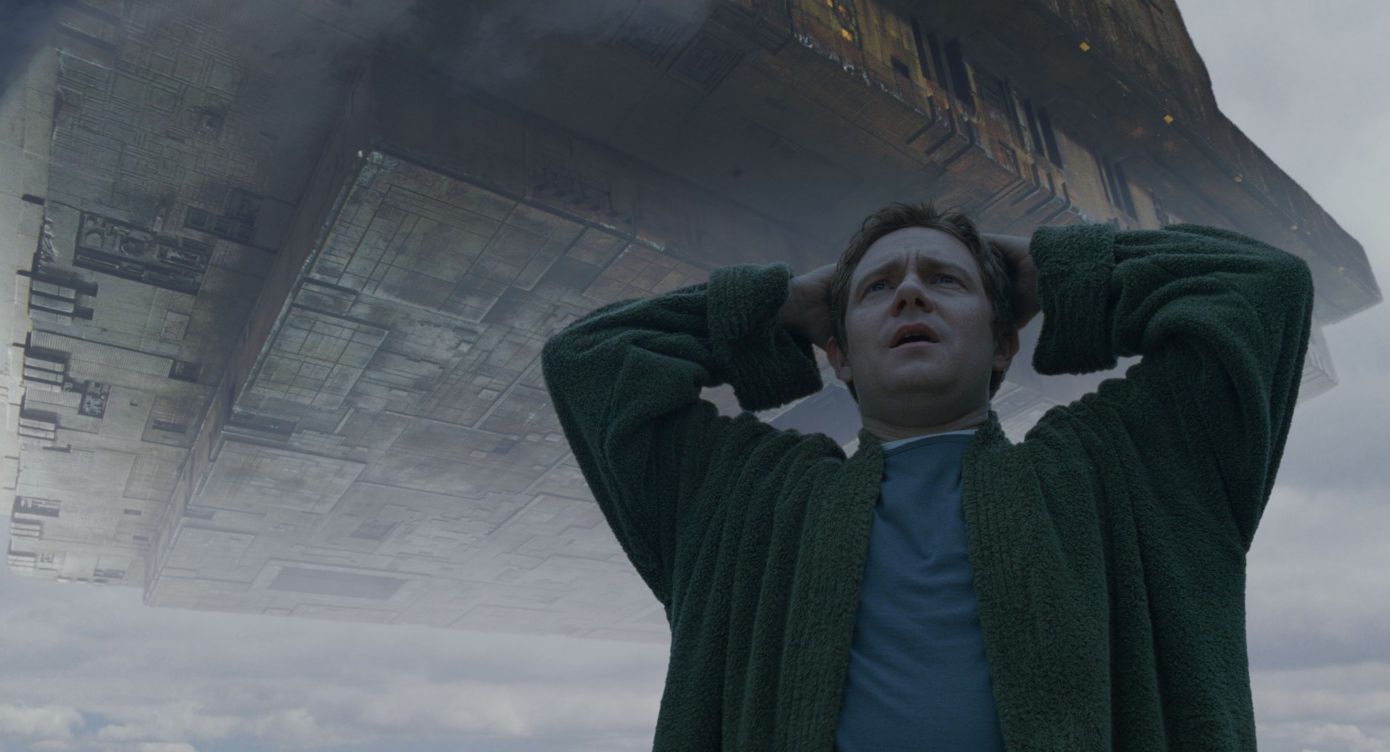 The late Douglas Adams used science fiction as a way to tap into the obsequiousness of British manners. He viewed the universe as a shortsighted place not unlike Earth, fueled by petty bureaucracy and childish whims. I’ve never been much of a fan: reading his novels is akin to being stuck in an elevator with a painfully ironic nerd who can’t suppress his pet obsessions. Adams digresses wildly from his tale of a modest British everyman and his wacky intergalactic friends as they seek the answer to “life, the universe and everything.” His books were an excuse for him to indulge in absurd knock-knock jokes about semi-mathematical nonsense, or philosophizing about how dolphins and mice have been running the Earth unnoticed since the Dawn of Man. He has an interest in vaudeville gags, winding word-game poems, endless puns, and characters with names like Slartibartfast, Zaphod Beeblebrox, and Questular Rontok. But admittedly, his fans could find a way to tap into his geek pleasure in highfalutin words and lowbrow comedy. It’s all fueled by a love of words, words, words.

But I suspect even his most loyal readers will have a tough time with the long-awaited film adaptation of A Hitchhiker’s Guide to the Galaxy. Opening with the aforementioned dolphins splashing around on a moonlit night singing to the Earth people about how their world is coming to an end (“So long and thanks for all the fish!”), we’re introduced to Arthur Dent (Martin Freeman, the slacker hero of TV’s The Office) rescued by space traveler Ford Prefect (Mos Def) seconds before Earth is blown to smithereens, making way for a hyperspace express lane. Since this isn’t Spielberg’s The War of the Worlds, and ironists don’t weep over billions of corpses, Ford and Arthur don’t fuss over the apocalypse. They’re on their merry way. One wishes there had been at least a moment of silence for humanity. (Terry Gilliam, who shares much of Adams’s darkly comic sensibility, got the tragicomic moment right in Time Bandits when the young hero stands in the obliterated ashes of his parents house calling, “Mum? Dad?”)

Ford and Arthur’s adventure is never given a sense of purpose, so the audience is left with a hodgepodge of mostly unrelated comic sketches as they lurch from one planet to the next, collecting friends and enemies along the way. They have to find a space gun that…oh, why bother? As in the book, the heroes lose interest in their mission and spend far more of their energy talking about how great it is to have a knife that toasts and butters bread even as you slice it. Or watch the President of the Universe, played by a hammy Sam Rockwell as a cross between an arrogant country-western singer and George W. Bush, run around the spaceship engaged in an argument about navigation through space between his two heads—and, yes, there’s the inevitable dick joke too.

Director Garth Jennings doesn’t sustain any momentum in Hitchhiker’s Guide because everything that happens is completely arbitrary, and zany. What makes “zany” work is having something to keep it centered, but Arthur Dent never makes an impression as anything more than a passive observer. (Book adaptations frequently have this problem…call me Ishmael!) The love story involving Arthur and a self-involved Earth girl (Zooey Deschanel) falls flat because they never register as more than stock comedy types: the nerd and the unattainable gal. On the page, Adams gave allowances for his nerdy fan boys to project on Arthur Dent, and imagine every rejection they suffered throughout high school. On the screen, Freeman and Deschanel give such mannered, mugging performances that they’re like cartoons. To be fair, they’re trying to keep up with everyone else, and Rockwell’s gluttonous scenery chewing is insufferable. I mean, you know you’re going for a wild ride when the most restrained performance is by John Malkovich.

Hitchhiker’s Guide is worse than being simply a lame book adaptation because of its infuriating smugness. If you’re not falling into rhythm with its fast pace and geek in-jokes, you’ve crashed the wrong party. And the film offers no help to the uninitiated. Almost every narrative thread goes unresolved, and not in that Fellowship of the Ring way that’s paving the way for sequels. Once you realize that Hitchhiker’s Guide writes its way out of every story problem through a trick Adams pulled out of some hat, all suspense gets thrown out the window. If anything can happen, there’s no reason to care. Is this the kind of on-screen legacy Douglas Adams hoped for? If so, to quote Marvin the Paranoid Robot, “I’m feeling very depressed.”