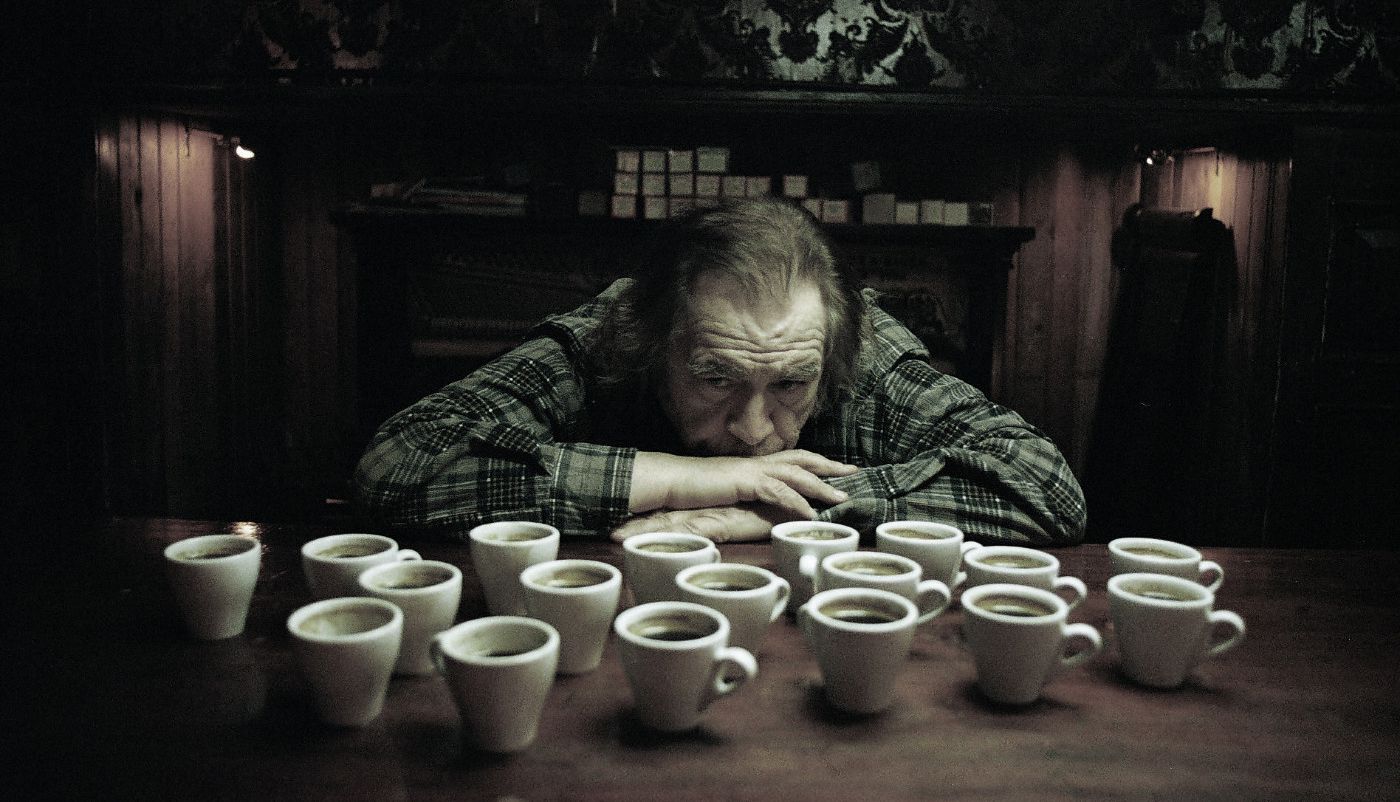 Writer-director Dagur Kári’s The Good Heart takes place in one of those mythical New York bars, a relic from an imagined past that seems to exist on the edge of nowhere (actually lower Manhattan), in which the same gallery of offbeat regulars pony up every night at the dumpy wood counter, the door shut against the forward march of time. The owner, Jacques (Brian Cox), is similarly a walking anachronism, an ill-tempered lout given to foul-mouthed tirades casually sprinkled with racist, sexist, and homophobic epithets and who’s so out of place in the contemporary city that his ancient junker of a car still has Beame-era yellow-on-blue plates. Actually, the film seems to unroll in no fixed moment (though the fact that every other car, save one, has up-to-date tags seems to suggest it’s nominally set in the present); even when Jacques leaves the bar, it’s to visit friends who seem as stranded in time as he is. When, mid-film, a group of five suited businessmen enter the bar with an offer to buy, it feels like an invasion, the contemporary city breaching the gates of the fortress.

This sense of temporal suspension, enhanced by a slight fuzziness to the cinematography, is the fim’s most endearing quality. Otherwise it’s nothing more than a soggy tale of redemption in the face of mortality. Suffering his fifth heart attack at film’s opening, Jacques ends up sharing a hospital room with kind-hearted homeless kid, Lucas (Paul Dano), who recently botched a suicide attempt. Sensing his approaching mortality, Jacques takes the young man under his wing, teaching him the rigid code governing the bar’s operation, letting him live in a shithole apartment above the establishment and nominating him to take over the business after his death. Things run along smoothly enough until Lucas befriends a young woman wandering lost in the rain, brings her home, and in short turn, marries her—a series of decisions that drives Jacques into a rage since, as he reminds Lucas, his bar is a decidedly “bitch”-free zone.

The Good Heart isn’t the first movie about the redemption of a cantankerous, intolerant man, but perhaps because Kári seems so committed to making his character as unbearable as possible before suddenly switching gears, it’s one of the least convincing. While Jacques occasionally shows moments of kindness before his sea-change, he’s far more likely to angrily shout things like “champagne is not for wetting pussies, it’s for celebrating major sporting events,” thus positing his self-willed anachronistic existence as being conservative in more senses than one. It’s an act that quickly becomes tiresome, both for those around him and for the audience, but just when his perpetual distemper starts to run over into psychosis, the chance for a heart transplant (and the implications of the title metaphor could not be more trite and obvious) trigger a sudden character change which tough guy Jacques acknowledges by saying, “I’ve become a sissy,” but is no less unconvincing for the recognition. It all leads up to an ending so utterly ridiculous that, but for the fact that only a fraction of the people will see this movie as flocked to Remember Me, it deserves to stand with the conclusion of Allen Coulter’s film as a textbook example of the sublimely awful.