Cult director Monte Hellman lets the motors do the talking in Two-Lane Blacktop (1971). Poignant and unique, this road movie cruises across the border of entertainment into the realm of art. The film evolved from a screenplay penned by novelist Rudolph Wurlitzer and features performances by singer-songwriter James Taylor and Beach Boys drummer Dennis Wilson. The great Warren Oates, the sole professional actor in the main cast, delivers a performance that not only approaches brilliance, but speeds clear past it with a raucous howl. The sparse plot leaves plenty of room for meditative long takes, gorgeous shots, and intimate monologues. The Driver (Taylor) and the Mechanic (Wilson) drag race for cash in the Car (a ’55 Chevy). They pick up the Girl (Laurie Bird), a possibly under-aged free spirit who adds some tension to their quiet co-existence. The manic GTO (Oates) menaces them playfully in his slick 1970 Pontiac until they all meet at a gas station and agree to a cross-country race. They mail their pink slips to an address in D.C. and the first to arrive gets the other guy’s car. The film’s collaborators alchemized this simple premise into a complex work that explores the notion of competition and its failure to provide a lasting escape from an existence often stalled by malfunctions no mechanic can fix.

Emotion is rather shy in this film; it shivers in the Driver’s cold eyes, lounges in the Mechanic’s relaxed body, laughs behind GTO’s flimsy mask. The Driver is an ascetic, alone with the road no matter who surrounds him, a hermit behind the wheel, in communion with his ascending speed. “You can never go fast enough,” he scolds a naïve GTO. There is no heater in the Car because, he explains, “it slows it down.” The Mechanic is his loyal guide, typically quiet but prepared to perform surgery on the machine’s inner workings if anything threatens its thunderous power. The Mechanic fixes not only the Car—he uses his handiest tool, his affability, to ease the tension between the other characters. The Girl is a drifter in everything she does. She drifts from the Mechanic to the Driver. She drifts from the Chevy to the Pontiac. In the end, she just drifts away.

While the Driver, the Mechanic, and the Girl lack personal histories, GTO serves as their comical opposite. In contrast to his reserved opponents, this man is a poet, spouting such gems as, “Color me gone, baby” and “If I’m not grounded pretty soon, I’m gonna go into orbit.” With a kaleidoscope of fictional anecdotes spinning inside his mind, GTO recites a different story about his past to each of the unimpressed hitchhikers he picks up. His consistent inconsistencies find their reflection in his wardrobe—he wears the same style sweater without fail but every time he appears the sweater is a different color, appropriate for man who is always the same and always different. Collectively, GTO’s lies conspire to provide us with the truth: He is a middle-aged man desperate to escape from himself, racing against his disappointing past for the prize of a fulfilling future.

The characters speed through epic wide-screen compositions that render the commonplace profound. Headlights soar through the dark like shooting stars. Landscapes unfold solemnly beyond voyeuristic windshields. Greasy diners and gas stations blossom along the side of the road. The visuals find worthy competition in the soundtrack, a symphony of baritone motors, falsetto breaks, tuneful horns, humming engines, and a harmony of lonely voices. Music leaks out of radios and characters sing along as if they had finally found a friend. Despite all the fuss about the cars, the camera and the sound equipment are the greatest machines at work.

Critics often affix the word “existential” to Two-Lane Blacktop because its stylistic austerity easily invites the label. A look beyond the stark visuals and minimal dialogue, however, reveals that Two-Lane Blacktop primarily concerns competition and its tendency to veer from its rightful course and become ubiquitous in the characters’ lives. Tension between competing elements defines the film. It is an American road movie that looks like a European art film. It is a slow-paced movie about speed. The characters strive for both solitude and camaraderie. The Driver lusts for the Girl but is married to the Road. GTO is desperate to communicate but avoids the truth. The Driver and the Mechanic compete for the affections of the Girl and then GTO competes with both of them. It is a film of many thematic layers competing to rise to its stylistic surface.

The other major theme—obsession—thrives in the subculture of car freaks who haunt the characters along their frequently stilted journey. The Driver and the Mechanic obsess over the Car like finicky parents and exchange obscure technical lingo as if it is the only language they speak. They mingle at racetracks and street races with other car nuts. Minor characters lingering in gas stations and parking lots marvel at the Car and enthusiastically inquire about its engine power. Scouting suckers for a race, the Mechanic notes the attributes of the assembled cars with the knowing air of a scholar. These esoteric rituals might stir vague feelings of recognition in the film buff, as if by viewing this film the obsessive cinéaste in question had wandered into a house of mirrors that distorts his reflection and renders it somewhat comic. “They’re not for you,” GTO warns the Girl of the two gear-heads she’s riding with. “All they think about is cars.” Some of us think only about films.

The film’s finale finds GTO offering a lift to two soldiers on leave. He provides them with his final lie, the most moving and pathetic of them all because he pieces it together with actual fragments from the film’s story, suggesting that he might have cannibalized bits of disappointing truths for the construction of his previous lies. Following the painful fiction he offers the soldiers, he explains that there is nothing like building an old car from scratch and beating a Detroit machine in a race. “That’ll give you a set of emotions that’ll stay with you. Know what I mean? Those satisfactions are permanent.” He disappears in his yellow chariot and we visit the Driver one last time as he awaits the starting signal for yet another race. A peaceful silence descends and places us within his devout concentration. In what might be one of the greatest final shots in history, as the Driver accelerates silently towards the horizon, the film stutters, halts on a freeze-frame, and dissolves from the heat of the projector, punctuating the film with a poignancy only cinema can provide. It is as if the characters refused to stop moving, so the movie itself felt obliged to. Two-Lane Blacktop proves that great films can spark the same set of emotions GTO referenced, the ones that stay with you. Those satisfactions are indeed permanent.

The Criterion Collection presents Two-Lane Blacktop in its original 2.35:1 aspect ratio in a digital transfer supervised by Monte Hellman. The sound is presented in Dolby Digital 5.1. Two commentary tracks accompany the film, the first a conversation between Hellman and filmmaker Allison Anders that primarily focuses on details of the production, the second a conversation between screenwriter Rudolph Wurlitzer and film professor David Meyer that is more analytical. In addition to the standard rare production stills, screen tests, and original theatrical trailer, Disc Two contains many filmed conversations between the collaborators that provide the viewer with everything they would ever want to know about the film. The production was an interesting one—Hellman filmed the scenes in order so the crew essentially embarked on the very same cross-country journey as the characters and he only gave the actors portions of the script as filming progressed, a decision that must have added to the film’s natural feel but apparently frustrated James Taylor to no end.

The DVD booklet contains an interesting and informative essay by Kent Jones, an enthusiastic blurb by Tom Waits, a list of Richard Linklater’s very amusing reasons for loving the film, and a piece by Michael Goodwin about the production originally published in Rolling Stone in 1970. The most interesting inclusion in this Criterion package is Wurlitzer’s screenplay, which Esquire had originally published in its entirety with the declaration that Two-Lane Blacktop was the “Film of the Year” before it had even been released, dooming its chances with a counterculture audience anticipating another Easy Rider. The screenplay features many scenes that didn’t make it to the final cut, providing a context for certain sequences that might seem idiosyncratic but have merely been stripped of the passages that explain them, which indicates that the editing also played a huge role in creating the film’s atmosphere. The screenplay and the many extra features enhance the experience of this incredible work, unappreciated on its release and largely unavailable for years. 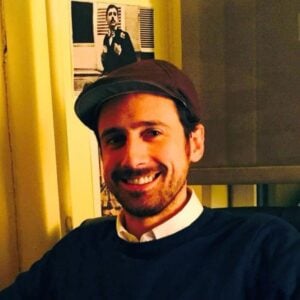 Chris Gisony is a teacher/mentor at Fusion Academy.