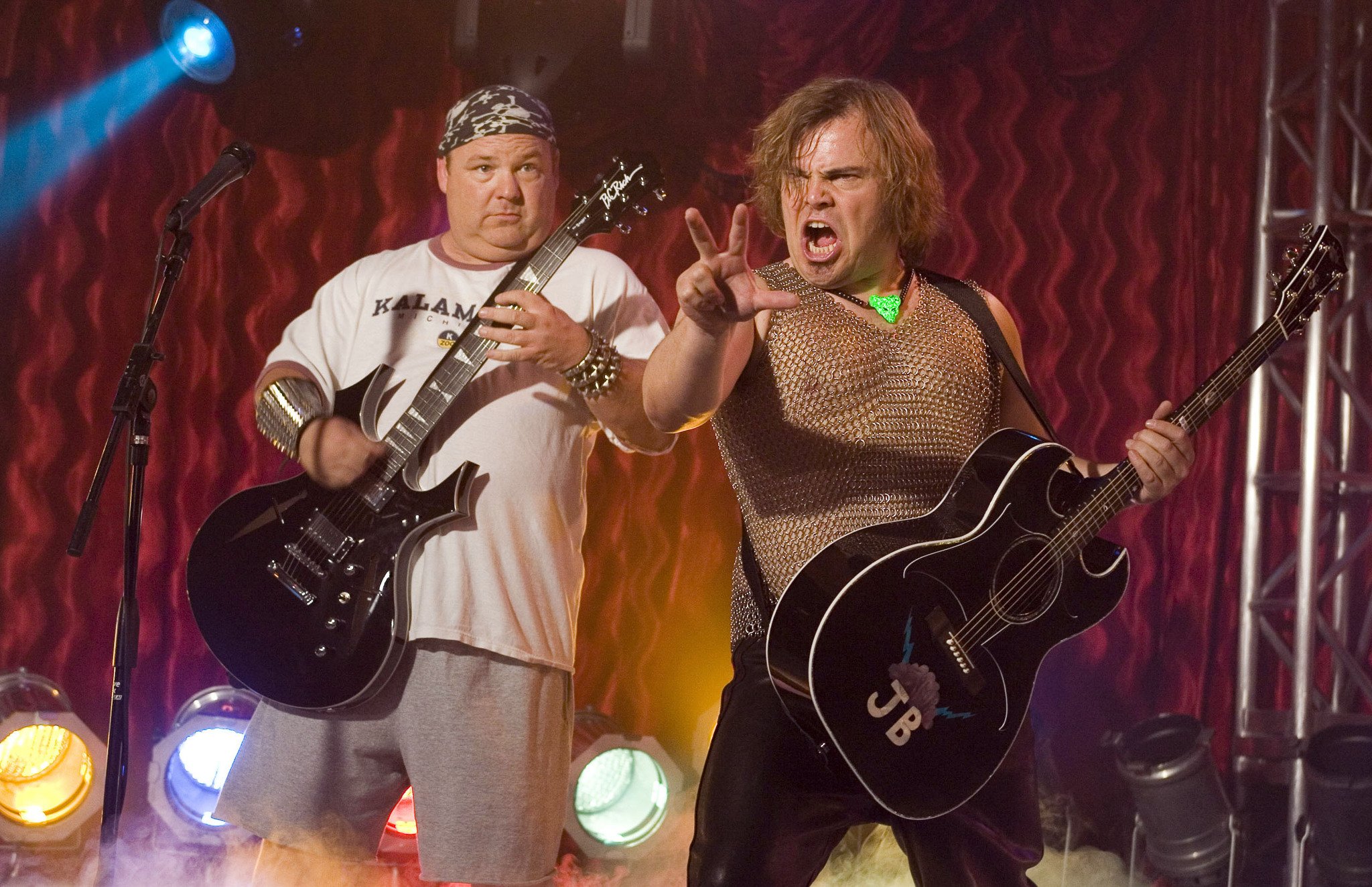 I’m reluctant to describe Tenacious D: The Pick of Destiny as a disappointment because to do so would play right into the filmmaker’s hands. The movie doesn’t just invite and exceed low expectations; its half-assedness is woven into the fabric of its screenplay, which, one can only presume, was printed on hemp-based paper. Paying to see it is the moviegoing version of ordering Domino’s when you’re baked; just as the cost of a ticket won’t yield a real movie, the late-night phone call won’t deliver an actual pizza, merely a pizza-flavored circular object cut into triangles.

Thanks to the instant grins earned by familiarity, it’ll likely satiate most people who attended top-billed Jack Black and Kyle Gass’s live stand up metal shows, loaded their knucklehead-banging music onto iPods or watched their limited-run HBO series (a gem that made my Star-Ledger Top 10 list, lest you discount my complaints as the grumblings of a latecomer). But even if you’re predisposed to give the boys the benefit of the doubt, the thing still starts evaporating from the memory the minute your Timberlands touch pavement.

Granted, Black and Gass, who cowrote the script with director Liam Lynch, had to navigate a tricky commercial middleground, surprising the fan base while bringing newbies into the fold. But given the deadpan surreal source material (he typed, as if we’re talking about Exterminating Angel here) and the obvious pride the performers take in their supposed goofball boldness, Black and Gass should’ve thrown caution to the wind more often. The D’s super-serious Pollyanna striving is a put-on, but the creators’ egos are the real deal, as evidenced by the film’s upbeat but weirdly smug presskit, which has Gass declaring, “We began to think about [a movie] right after our HBO shows finished. Right then and there, we said, ‘We’re going to make a motion picture that’s going to make you guys mad that you didn’t give us more creative control on the show.’” I doubt the result will compel any tearful resignations at HBO, for the simple reason that the shows are more charmingly demented than the big screen version. Imagine a sketch-comedy-derived-movie quality scale that had, say, Monty Python and the Holy Grail on one end and Coneheads the other; Tenacious D would fall somewhere in the middle alongside Wayne’s World, which it too often resembles.

The fatal flaw, if such a proudly lackadaisical picture can be said to have one, is that the gags never go as far as they could and should. The tarot card graphics between sections (also featured in the series) are charmingly grandiose; ditto the Book-of-Revelations-goes-to-the-Astrodome death metal score and the Joseph Campbell Comix storyline, which casts the odyssey of Jack Black and Kyle Gass (a.k.a. JB and KG) as an inspirational legend. From the musical prologue, which shows little JB breaking free of his Jesus-worshiping, rock-hating parents, to the mentor-pupil traning section, which has JB stalking Kyle’s mom-supported Venice Beach guitar player and inhaling his wisdom like cheap ganja (“Your training begins tomorrow at the crack of noon,” KG announces) to the legend of the title object (related by Ben Stiller, in a characteristically fussy and self-satisfied cameo as a guitar store guy) to the apocalyptic final showdown, which casts Dave Grohl as a gigantic goat-footed Satan in a death metal reimagining of the Charlie Daniels Band’s “The Devil Went Down to Georgia,” you’re asked—nay, implored—to believe that what you’re seeing is A Myth For Our Time, and perhaps For All Time. It’s all a goof, of course. The only people who take The D seriously are The D and their first, most devoted and perhaps only fan, Lee (J.R. Reed, who from certain angles looks like the missing Affleck brother).

But even goofs should be fueled by passion, the more reckless the better. The Pick of Destiny is mostly content to be mildly amusing. Every 10 minutes there’s a good line (KG instructing JB to practice his cock push-ups because “You never know when you’re going to need to fuck your way out of a tight situation”) or a smokin’ sight gag (JB showing us, Scanners style, what it means to blow someone’s mind with music), but there’s also a lot of Wayne’s World stoner-layabout filler.

The opening childhood section promises a crazier and more memorable movie than the filmmakers deliver; it’s a sung-through rock opera seemingly modeled on Ken Russell’s Tommy, with little JB (Troy Gentile) shocking his parents at dinnertime with a profanity-clogged declaration of intent to rock, then getting a musical earful from his daddy (a splendid cameo by Meatloaf, singing onscreen for the first time since The Rocky Horror Picture Show), then being comforted by a poster of Ronnie James Dio (as himself) that comes to life and exhorts JB to hit the road and meet his destiny. If the whole movie, or most of the movie, had attained this level of beguiling dementia, it might have been one of the year’s most surprising comedies, but it rarely climbs to those heights. (Lynch kept threatening to turn his last outing, Jesus is Magic, into a sung-through thrill ride, but invariably crapped out; the man’s a musical pricktease.)

Not only does The Pick of Destiny lack the nerve to embrace its boldest instincts and be the balls-out comedy-musical-fantasy Black is clearly raring to star in, it diminishes its most promising flights of fancy with comedic safety nets. For instance, when JB scarfs woodland mushrooms and hallucinates a psychedelic music video friendship with Bigfoot, what that stops the sequence from being a surreal modern classic on the order of the battle of the news teams in Anchorman are Lynch’s frequent cutaways to JB in the “real” world, which reassure you that it’s just a dream. The sequence would have been more daring if JB really was hanging out with Sasquatch; by way of comparison, what made the Anchorman rumble great, rather than merely diverting, was the aftermath, in which we found out that it wasn’t a fantasy, that the anchor teams really did maim and kill each other in the street, and that apparently this sort of thing was commonplace in mid-‘70s San Diego. (The aformentioned “mind blowing” gag is also couched in the context of a fantasy. The HBO series was less inclined to protect itself in this way; when something surreal happened, it fuckin’ happened, dude, and you were supposed to just accept it.)

Black, Gass and Lynch keep protecting themselves in ways both small (the Syd Field-style “reveal” that KG’s royalty checks are written by his mother; awwwww…) and large. Chief among the latter: the film’s apparently sincere undertone of Capra-esque can-do spirit. In previous incarnations, Tenacious D’s fanatical triviality and shallowness were never passed off as Holy Fool innocence. The gap between their belief in their own genius and the bombastic silliness of the songs was what made the whole thing funny. One eyebrow was raised at all times.

Part of the point seemed to be to subtly mock pop-culture products that pander to people like JB and KG by telling them that the main thing is to say “fuck you” to the naysayers and get out there and do your own thing, even if your own thing is derivative and dumb. That’s not the case in this feature film, which, like so many films derived from sketch comedy, wants to be satirical and straight, knowing and innocent at the same time; it wants us to laugh at JB and KG’s earnest mediocrity but also hold them up as examples of dreamers who refuse to take no for an answer.

Gass apparently believes the HBO series had more creative limits, but from minute to minute, it felt looser, freer and more startling than all but a handful of sequences in The Pick of Destiny. The show jumped without warning from relatively straightforward concert sequences (with the wide-eyed, intense but hopelessly nerdy duo promising to rock the motherfucking house, then playing what sounded like an acoustic cover of late -stage Deep Purple with lyrics by a 13-year old Zeppelin fan) to karate fights on Hollywood Boulevard with crude wire stunts and green screen work to faux-melodramatic “crises” that were resolved with borderline rock-opera-inflected confessions-in-song (”Last week, Kyle quit the band/Now we’re back together, uh/ Misunderstanding, didn’t understand/ It doesn’t matter, now we’re back together again /A-la la la la la/Couldn’t split up Kato and Nash. (that’s true)/ Couldn’t split up Tango and Cash/ That’s also true!/ This is our song of exultant joy because/ We only came to kick some ass”). The boys clowned like they had nothing to lose. Now they’re protecting an investment.